You Should Never Do These Things When Proposing to Your Partner

A proposal is a once-in-a-lifetime event, so you don’t want to blow it. Even if you’ve planned for months, popping the question can turn from good to terrible all too quickly. So, if you’re ready to take that leap, here’s some advice worth heeding. Before engaging in behavior you might regret, avoid these eight things if you want to avoid a terrible proposal.

1. Pop the question on a holiday

Holidays, at least the big ones, are observed for a reason. They’re paid enough attention to garner celebrations in their own right, so leave them out of your big day. It’s not a kid’s fault he was born on Christmas day and has to suffer through a two-for-one holiday/birthday combo for the rest of his life. But if you choose to pop the question on a high-profile date, you’ve no one to blame but yourself.

On the flip side, and on a much more sullen, less celebratory note, Monica Medina gives another reason you shouldn’t propose on a holiday. In The Huffington Post, she strongly advises against major holidays like Valentine’s Day because that holiday will pretty much be ruined forever if things don’t pan out. Instead, pick a day that’s more or less meaningless to both of you. There’s no sense in pushing your luck on this one.

Don’t follow the current trends when it comes to your proposal. | iStock.com/peterotoole

Trendy places won’t be in style forever, so it’s best to steer clear of them. Just as your soon-to-be fiancé will avoid completely trendy wedding-day decor, so too should you avoid taking a knee at a hipster-approved venue. It’s hot one day, ice-cold the next. And who knows, maybe the spot won’t even be around in a couple of years. As Martha Stewart Weddings points out, it’s best to choose a timeless location, like a scenic outdoor setting or a historic monument. That way, you’ll be able to return to your engagement spot for years to come.

3. Propose in front of an audience 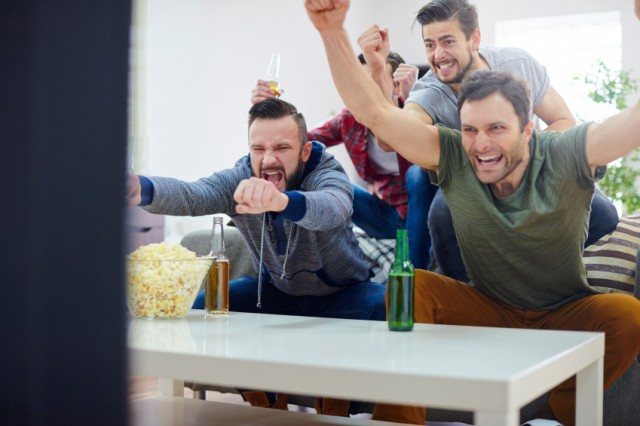 Save the announcement for your friends until after your partner says yes. | iStock.com

You know that person who asks his partner to marry him on the Jumbotron at a basketball game? Don’t be that person. If there’s any time to include only those directly involved, it’s now. An intimate proposal will ensure the most meaningful of moments and make for a lasting memory filled with love rather than a bucket of spilled popcorn and an arena full of strangers. Plus, The Knot says if someone feels like they’re on stage, they won’t be able to savor the moment.

4. Come out of left field

Your partner should know a proposal is coming. | iStock.com

Generally speaking, proposals are fun surprises. What you shouldn’t do, though, is spring the idea on your partner out of nowhere. According to Wedding Ideas Magazine, you should know the answer you’re going to get rather than just assuming. Confidence is great and all, but if you and your partner have never actually discussed the idea of an engagement, let alone marriage, things could get ugly, and fast.

You’ve seen it in movies: A guy asks the waiter at a Chinese restaurant to hide the ring in a fortune cookie. But this silly scenario always seems to go awry, and it gets delivered to the wrong table. Or, a character asks for the ring to come out with dessert only for it to be set ablaze by festive sparklers. While these onscreen stories may be far-fetched, it’s worth taking note and exercising better judgment. GQ even cautions against putting the ring on a live animal. Unless you want old Sparky sprinting through the park with a couple of carats around his neck, think very carefully before tying a precious diamond onto his collar.

Never propose without a ring. | iStock.com

We don’t want to say it’s all about the bling, but it certainly doesn’t hurt. A survey conduced by The Knot asked more than 19,000 couples about the biggest engagement faux pas. “Proposing with no ring” took the No. 1 spot. However, if money’s tight or your partner isn’t into the whole engagement ring tradition, maybe there’s something else you can substitute in its place. Perhaps a locket with your picture in it or a handmade ring crafted from wildflowers will do. You don’t have to be the most creative person in the world, but you get the idea. Something physical to mark the momentous occasion will go a long way.

Don’t tell every friend you’ve ever had you’re going to propose. | Universal Pictures

A big mouth is hardly an enviable trait, so keep yours shut until it’s time to pop the big question. Even if you’re typically loose-lipped, fight the urge to blab about the pending proposal until after it’s taken place. Martha Stewart Weddings says you don’t want to run the risk of ruining the surprise, which is why it’s in your very best interest to keep the details to yourself. Your partner’s parents, and your own, may be on the need-to-know list, but they’re likely the only ones who make the cut.

Practice how you’re going to propose before making the move. | iStock.com/max-kegfire

You’ve heard it 1,000 times before: Practice makes perfect. The only way to ease your nerves before the big day is to run through what you’re planning to say. Even if it’s nothing fancy, your delivery will go more smoothly if you’ve practiced a time or two beforehand. Wedding Ideas Magazine explains, “Getting the proposal right is all about good timing, wording, and minimal hiccups — so practice, practice, practice!”