Melania Trump is not your typical first lady. She’s the only U.S. first lady born in Slovenia — and only the second not born in the U.S. She speaks at least five languages, and had a successful career as a model. However, there are some elements of her past she’s never going to get away from.

Let’s take a closer look at her past, including one thing she will likely never be able to distance herself from (page 5), and how she really feels about living in the White House (page 7).

Her speech at the Republican National Convention attracted the wrong kind of attention. | Don Emmert/AFP/Getty Images

A first lady — even before officially inheriting the title — is expected to offer her voice to voters on behalf of her partner. Melania Trump didn’t do the best job on that front.

She gave a speech at the Republican National Convention in 2016 that sounded a lot like the one Michelle Obama gave at the Democratic convention in 2008. Harsh criticism kept her away from speech-giving until the week before her husband was elected.

Next: She wore the wrong shoes at the wrong time. 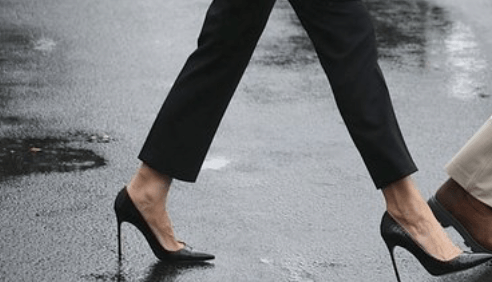 It’s normal for the internet to comment on everything celebrities are wearing while out in public. The first lady faced a much more extreme form of criticism — all because of a pair of shoes.

When Hurricane Harvey hit Houston, she and the president headed down to Texas to view the damage. She was photographed wearing 5-inch stiletto heels as the two navigated the aftermath of the flooding, which sparked outrage on Twitter.

Next: She used to be a model, but she’s not too fond of this part of the job.

She’s not a huge fan of the spotlight

You’ll often see her hiding behind big sunglasses or standing to the side. | Drew Angerer/Getty Images

Donald and Melania Trump met at a New York Fashion Week party. She’s used to all eyes and lenses pointing in her direction. But that doesn’t mean she likes it.

She seems to prefer low-key events and outings, remaining in “stealth mode” even as she meets with officials and citizens alike. Many of these appearances don’t even make the news — and it’s quite possible that’s no accident.

Next: She’s very open about her private relationship with the president.

But she’s not afraid to talk about her sex life

She’s said some candid things in the past. | Saul Loeb/AFP/Getty Images

In 1999, she talked with radio personality Howard Stern. He asked her whether she and Donald Trump, who were publicly dating at the time, had sex every night. She told him “even more” and that they “have a great, great time” together.

Next: This part of her past will likely haunt her forever.

She posed nude for GQ

She doesn’t talk much about her racy past. | Jim Watson/AFP/Getty Images

Back in 2000, Melania Trump posed nude for British GQ. It’s not at all uncommon for models to pose for photos like this — if they’re comfortable with it, they consider it part of the job.

The first lady couldn’t see 16 years into the future to know her career choices might resurface alongside her husband’s presidential campaign. This wasn’t the only time she posed for risqué photos — and she doesn’t regret them.

Next: She doesn’t regret this photo shoot, either.

She was also photographed in a bikini while pregnant

Photographs of her younger days have resurfaced. | Win McNamee/Getty Images

A 2006 issue of Vogue features Melania Trump standing in front of an airplane, wearing a bikini, in her third trimester. Though some have said it’s fake, she’s never denied it. Like her work with British GQ, she just considers it part of her past career.

Next: Melania Trump knows what her dream job isn’t.

She didn’t want to be first lady at all

Melania Trump never showed much interest in her husband’s campaign, aside from basic moral support. She hasn’t shown much enthusiasm for her new role since becoming first lady.

She not only delayed her move into the White House, but she also rarely looks happy when appearing alongside the president. There’s even a conspiracy theory claiming Donald Trump hired a body double to pose as his wife in public.

Next: She might have some steep competition with Ivanka Trump.

There may be some competition between Ivanka and Melania

A recipe for disaster? | Astrid Stawiarz/Getty Images for IMG

When it comes to playing favorites, Donald doesn’t try to hide the fact that Ivanka is the golden child. This also means the first daughter takes on many of the responsibilities that usually belong to the first lady. Daily Mail Online reports a White House spokesperson reassured that Ivanka and Melania are still close, no matter what reports say. But other sources said the two haven’t always gotten along as Ivanka took over some of Melania’s responsibilities. Still, we’ll have to wait and see if any competition between mother and stepdaughter would put a rift in the marriage.

Next: Melania never actually thought she’d have to live in the White House. 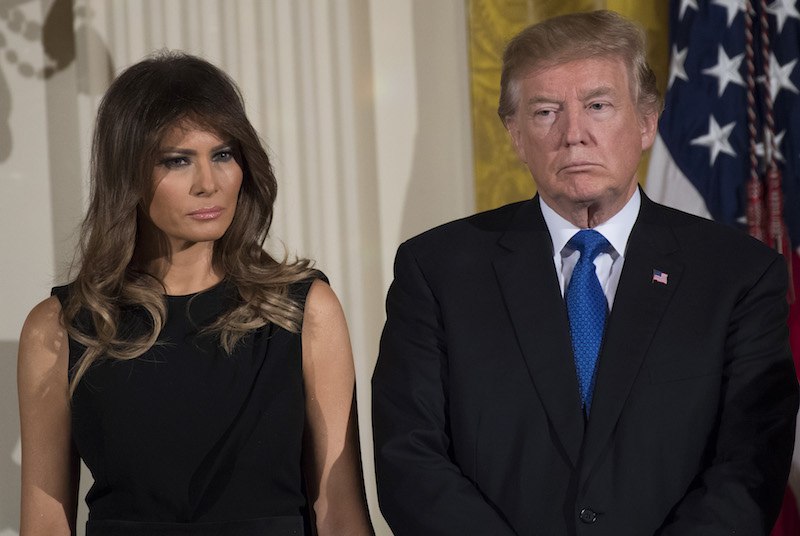 Next: In all honesty, she’s doing the best she can.

She’s still trying to use her influence for good anyway

What else will she accomplish? | Chip Somodevilla/Getty Images

Despite all the controversy surrounding her and the president, she still managed to accomplish a lot in her first 100 days as first lady — much more than promising to combat cyberbullying and fight for women’s rights, per her speech just before Trump’s election.

So far, she has supported a number of different charities and volunteered in an effort to support children and teens.