This Inspirational Book May Change Your Life 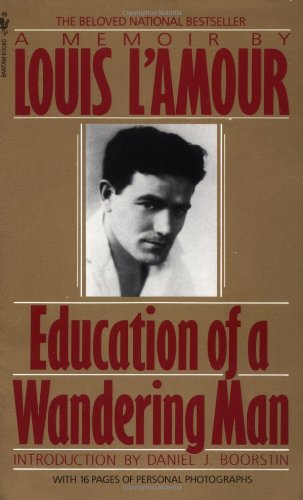 Louis L’amour is known as “America’s Storyteller” and is one of the most prolific authors in history. He authored over 50 novels before he died in 1988, which is coincidentally the same year that his autobiography was published. As a writer, L’amour is known for steeping his stories in historical fact and beautifully portraying the struggle of frontier living. As a man, he is remembered for his ardent love of learning and an unquenchable thirst for knowledge. Such a thirst took him from “hoboing” across the country in search of menial work to the greatest heights of celebrity and public recognition.

In his memoir, Education of a Wandering Man, L’amour fans are indulged with a dizzying account of books and experiences that laid the foundation for his stardom. For those who haven’t experienced the treasure of L’amour’s storytelling, the book will inspire you to explore his impressive repertoire and learn more about the rich history of frontier life in the context of some of the most memorable characters in American literature.

Lovers of knowledge will profit from L’amour’s intimate account of his personal education: “It seems to me that every written word is an effort to understand man’s place in the universe. What is he? What is he becoming?”

It’s clear that his need to know is more than an uncontrollable urge, but a deep desire to connect with humanity. In every chapter there is a detailed list of the books that comprised his education, from Plutarch to Hamlet, and from H.G. Aristotle to John Steinbeck. These lists fit perfectly in the story of his own personal development, and readers are treated to the gradual yet profound formation that the greatest minds in history had on young L’amour. He speaks of each book as an instructor and of every author as a friend.

L’amour inspires readers to look at books as treasures and the knowledge within them as kingly gifts: “One thing has always been true: That book or that person who can give me a new idea or a new slant on an old idea is my favorite.”

As a man who educated himself, L’amour took none of his knowledge for granted, as so many of us who are instructed tend to do. But no matter your level of education or style of learning, L’amour’s unbridled enthusiasm for wisdom will inspire you to take your reading to a new level. He writes, “If I were asked what education should give, I would say it should offer breadth of view, ease of understanding, tolerance for others, and a background from which the mind can explore in any direction.”

In a time when academic institutions are so ruled by dogma and corporate interests, L’amour offers a welcome dose of reality, claiming learning should increase one’s humanity rather than one’s prejudices. He also offers some sage advice about the practice of reading itself: “My advice is to read what entertains you. Reading is fun. Reading is adventure. It is not important what you read at first, only that you read. Many would advise the great books first, but often readers are not prepared for them.”

It is this advice that prompted me to read The Outline of Sanity by G. K. Chesterton and Frog and Toad by Levi Arnold, in the same day.

L’amour’s narrative of his education is also a lesson to anyone who dreams of success. After many years of sailing around the world, boxing professionally, and hopping from job to job as a hobo, L’amour decided that he would be a professional writer. After his brother bought their parents some property in Choctaw, Oklahoma, L’amour lived with them for several years while launching his career.

“I knew that success would come with difficulty, but I never imagined how many letters of rejection it would take.” He cuts it straight; if you want to succeed in anything, be prepared to fail countless times. L’amour was humble enough to include a list of his submitted articles in a diary from 1932, noting rejection after rejection, with the rare acceptance highlighted.

Modern culture tends to idolize luxury rather than effort. Because of this, we find ourselves pining for the luck and leisure of the high performers. L’amour, among the most successful people of all time in any arena, dispels this illusion: “I never found any money; I never won any prizes; I was never helped by anyone, aside from the occasional encouraging word and those I valued. No fellowships or grants came my way, because I was not eligible for any and in no position to get anything of the sort. I never expected it to be easy.”

The list of jobs L’amour had before he reached the top include: cow hide stripper, boxer, crew mate, minor, overseer for prospecting, supply officer in the U.S. army, book reviewer, and saw operator. His take on fame: “A man has to start somewhere.”

L’amour was also a nationwide lecturer, having spoken at commencements, public halls, and universities throughout America. On describing his first public speaking experience, he accurately portrays the feelings of fear and insignificance that every man battles before he finds success:

The night before the speech I did not sleep. The day of the lecture I decided I could not go through with it. A lady was driving some distance to pick me up and I called her to beg off. It was too late. She was already on her way. All I wanted now was to get out of it, any way I could. I was sure I would make an unholy fool of myself trying to speak to any sort of a crowd, yet I could think of no way out. And then she arrived.

With a dreadful sinking feeling, as of a man going to his execution, I got in the car and we turned to leave. I thought of jumping out. I thought of everything. We were rolling down the highway then and I was making small talk, trying to think of some way out. There was no way. I had gotten myself into this fix and must see it through. On state I reached into my pocket for my notes and they were not there.

As surely as I began to search my pockets for them, somebody would snicker and I would have had it. So I began to talk without them, and somehow the evening passed and everybody seemed pleased. I was off the hook.

L’amour writes about wanting to jump out of a moving car so he wouldn’t have to face his demons, which is something every man can relate to. But he made it work.

If you didn’t know of L’amour’s rich catalog and profound literary influence, you might think him dry. He never drank, never did drugs, never wrote about sex, and spent most of his time either writing or reading. But his mind was richer than that of 99.9% of people: “Often I think of what pitiful fools are those who use mind-altering drugs to seek feeling they do not have, each drug taking a little more from what they have of mind, leaving them a little less. Give the brain encouragement from study, from thinking, from visualizing, and no drugs are needed.”

He was also too focused on character development to be tempted about writing on sex: “My stories are not concerned with sex (a leisure activity) but with entering, passing through, or settling wild country. I am concerned with people building a nation, learning to live together, with establishing towns, homes, and bridges to the future.”