You may have fears of getting hit by a flying baseball when you’re sitting in the stands at a game — but you’ve probably never considered the possibility of being hit by a hot dog. CBS News reports that’s exactly what happened to one unlucky baseball lover in the stands of a Phillies game.

According to Phillies fan Kathy McVay, the baseball team’s mascot, the Phillie Phanatic, used his hot dog cannon to launch the food into the crowd. Unfortunately, one of the airborne hot dogs shot right into her general direction toward her face. The hot dog wrapped in duct tape then hit her in the eye, causing a serious injury. 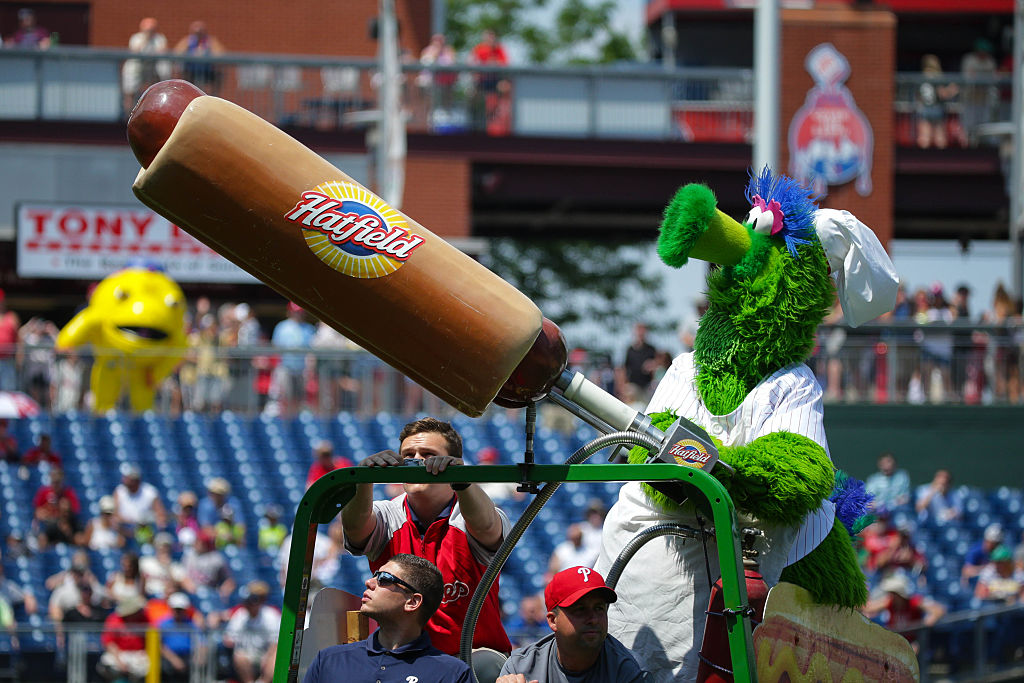 CBS News explains McVay’s arm was in a sling, which caused her to be unable to swat away the flying hot dog. CBSSports.com’s Dayn Perry even said, “Jokes are going to be made about this, but anything hitting someone near the eye and leaving those kinds of marks is serious stuff.”

While McVay is OK, she did end up with a small hematoma. EMedicineHealth explains a hematoma is clotted blood that has leaked outside of a blood vessel, and it’s typically due to injury. While most hematomas resolve themselves, other can require surgery.

The hot dog launcher is no joke

If you’ve never seen the almighty Phillie’s hot dog launcher, now’s a good time to take a look. Gizmodo reports there was a documentary made detailing the launcher’s humble beginnings, which started with Hatfield meats suggesting the idea of throwing hot dogs into the crowd for extra entertainment. From there, the engineering was put into place to make it happen.

No one ever suspected the hot dog launcher could cause such serious damage, though. But with the mechanics in place to launch hot dogs 200-300 feet, it makes sense that this incident was only a matter of time.

Injuries at baseball games are more common than you think

Baseball lovers can’t wait to get their hands on seasonal tickets to their favorite games — but it might come with a higher risk than you’re anticipating. The Boston Globe reports at Boston’s Fenway stadium, a fan in the crowd is hurt by a ball or a bat “once every three or four games,” according to data. And while most of these injuries are fairly minor, that’s not the case for everyone. In fact, some fans have been hospitalized from baseball game-related harm.

There’s also this to consider: About 30 balls per game are hit into the stands at Fenway Park, says foul ball statistician Edwin Comber. And while fans like the idea of catching a foul ball, many are also injured from this.

A woman in 2015 was hospitalized due to a broken bat

The Star reports a horrifying scene unfolded at Fenway Park in 2015. Tonya Carpenter was in the stands when Oakland Athletics’ Brett Lawrie broke a bat during the second inning. The broken wood was launched, hitting Carpenter in the head. She was rushed to the hospital, was forced to undergo brain surgery, and is still working through her recovery.

When Atlanta Braves outfielder Melky Cabrera hit a foul ball, no one had any idea the consequences would be so severe. The Star reports the ball hit a 6-year-old in the stands, fracturing her skull in 30 places. Her family sued the Braves for having no protective netting that could have protected their child from the severe injury.

A foul ball killed a teenager in 1970

Alan Fish was 14 year old when he attended a game at Dodgers Stadium in 1970, New York Daily News reports. Manny Mota, the Dodgers outfielder, hit a foul ball into the stands — and it hit Mota on the left side of his head. He received an ice pack and returned to his seat, but it wasn’t long until he felt nauseous.

Mota had a fracture in his skull that caused hemorrhaging without him knowing it. He died four days later.