After a tumultuous history in the romance department, Tiger Woods appears to have found love once again. As he just might be in the midst of a professional comeback, Erica Herman, 33, has been by his side at many a golf tournament over the past several months.

Here we’ll list some fast facts you need to know about the couple. See what their body language reveals about their relationship (page 3) and why anonymous sources say she has a “troubled past” (page 6).

She was at the 2018 Players Championship

Herman was spotted with Woods, 42, as he vied for the title at the May 2018 Players Championship golf tournament — one of many where she’s appeared by his side. Woods played some of his best golf in years at the event. He finished well behind the leaders but ahead of where he expected to be in his latest comeback after spinal fusion surgery in April 2017.

Next: How they met

She was general manager of Woods’ restaurant

The two met through doing business together. | Rob Carr/Getty Images

Herman works in the restaurant industry, and that may be how the couple met. She worked as general manager of Woods’ restaurant in Jupiter, Florida, for several months, Heavy reported.

In February 2017, a post on Tiger Woods’ website mentioned her as general manager of The Woods, a pop-up restaurant near the 10th hole at the Genesis Open golf tournament in Los Angeles.

Next: A telling photo

Tiger woods was spotted with a new lady clutching with joy at his side. | Rob Carr/Getty Images

Photos show Herman hugging Woods as they watched the Presidents Cup in October 2017. He served as a U.S. team assistant captain at the event, and Americans won for the seventh straight time. In one photo, Herman cuddles up while Woods’ face shows a content expression. While neither has commented publicly on the relationship, things look pretty solid based on their body language.

At the event, Herman wore a “player spouse” credential at the event, a pass usually given to wives and girlfriends of players. She went to the opening ceremonies with other girlfriends and wives.

Next: They saw his beloved Dodgers in the World Series.

They went to the World Series

They’ve done some fun things together. | Tiger Woods via Instagram

The couple attended Game 2 of the 2017 World Series at Dodgers Stadium, ahead of Woods’ DUI court appearance. Woods shared a photo of the event on Instagram, during which they wore Dodgers jerseys and white baseball caps. They watched the Houston Astros beat the home team 7-6.

The couple took in the game from behind the visiting dugout. Woods grew up in Orange County about 30 miles from Dodger stadium.

Next: She stood by him on his bad days.

Together after a bad day of golf

She will be there for him on the bad days. | Rob Carr/Getty Images

In February 2018, Herman was by Woods’ side after he finished six shots off the lead in the first round of the Genesis Open. The two were later photographed leaving popular California sushi spot Nobu in Malibu. It was Woods’ return to the Riviera Country Club for the first time in 12 years. He went on to miss the cut in the second round of his second start on the comeback trail.

Next: Anonymous sources come out of the woodwork.

She seems to have won him over. | Rob Carr/Getty Images

If you can believe anonymous sources, Herman has a “troubled past,” according to a Radar Online article. The scathing story identified her as a “hard-partying gold digger who targeted the disgraced golfer for years.” A source quoted in article claimed he or she worked with Herman at a Florida bar for five years and said the couple met at a popular local nightspot.

Regardless, she’s been by his side quite a bit as he returns to the public eye after his DUI arrest in May 2017. “They’re having fun,” a source told People. “He’s not looking for anything serious now. She’s cool and he likes her.”

Next: Tiger’s past relationships 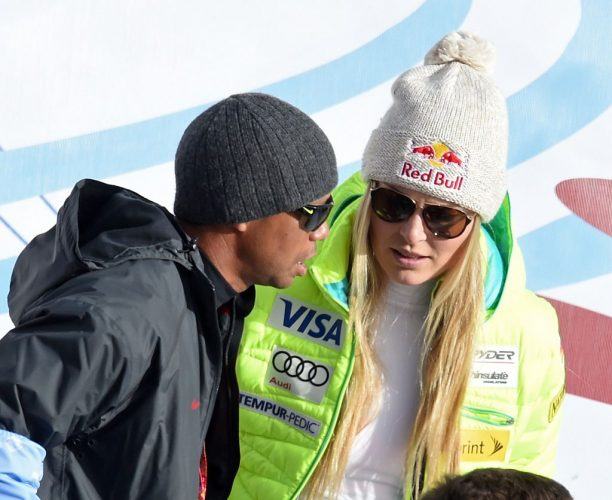 Before Herman, Woods dated Dallas-based stylist Kristin Smith for about two years. She reportedly ended the relationship in 2017 after learning he had cheated with Herman. Although Smith accepted hush money when the two broke up, she wants to end a non-disclosure agreement and speak to the press, reports say. Woods also dated Olympic skier Lindsey Vonn for more than two years.

Previously, Woods was married to Elin Nordegren from 2004 until 2010. They divorced after she learned he had been unfaithful multiple times.