Tom Brady and Donald Trump have something very surprising in common: They both have some off-the-wall beliefs when it comes to general health. The New England Patriots quarterback and current POTUS are very seemingly different individuals — one is a superior athlete and the other is, well, not the picture of health. What exactly are the bonkers beliefs these two have? You may need to sit down to read these — some of them are downright ridiculous.

Neither one of them eats fruit

Not everyone is a huge fan of fruit. | Mario Tama/Getty Images

It probably doesn’t come as much of a surprise that Trump doesn’t eat much fruit. (Ketchup is probably the closest thing to a fruit in his diet.) But Brady is also known to shun this important piece of the food pyramid. Brady’s personal chef, Allan Campbell, revealed to the Boston Globe that the quarterback’s diet is incredibly restrictive, and that he doesn’t eat any fruits, and shuns nightshades because they are “inflammatory.” On the contrary, there isn’t sufficient evidence that  these foods are bad for you. Long story short: Both men are depriving themselves are essential vitamins because of their food choices.

Sure, an athlete of Brady’s caliber is going to work out a ton. However, his philosophy on building muscle is bogus. In his book, The TB12 Method, the 39-year-old attributes his athletic success and his upstanding physical health to the “pliability” of his muscles. This method supposedly makes you muscles less dense and helps them withstand injury. Too bad there isn’t any science to back up his claims — one muscle expert even called the pliable muscle theory “balderdash.”

… and Trump’s thoughts on exercise

Sadly, Trump’s thoughts on exercise aren’t much better than Brady’s weird muscle claims. The POTUS thinks that exercise is bad for your health and can lead to an early death! Evan Osnos of the The New Yorker wrote: “Other than golf, he considers exercise misguided, arguing that a person, like a battery, is born with a finite amount of energy.” Maybe his buddy Tom Brady should tell him that exercise actually makes you live longer? Although that advice may fall on deaf ears, given that Trump thinks he and Brady are in the same physical shape…

Trump thinks he’s in the same shape as Brady

Trump believes he is just as fit as Tom Brady. | Andy Buchanan/AFP/GettyImages)

One of the most bizarre health claims Trump has made was on the The Dr. Oz Show back in 2016. The then-presidential nominee told Dr. Oz that he “feels the same age” as his golf buddy Brady, who is almost half Trump’s age. The 70-year-old candidate went on to say that he sees a 35-year-old when he stairs at himself in the mirror. (Although it’s highly unlikely that he is in the same shape as a healthy 35-year-old.)

They both have weird outlooks on sunburns

This is not very wise advice. | iStock.com/FotoDuets

Both men appear to have very odd views on protecting their skin from UV rays. In his book, Brady claims that the purified water he drinks every morning keeps him so hydrated that he doesn’t get sunburned. Trump doesn’t appear to be much of a sunscreen fan either, given his pension for frequenting tanning beds to help maintain his orange skin color. Both are, sadly, only opening themselves up to skin cancer.

Their thoughts on drinking water are bizarre 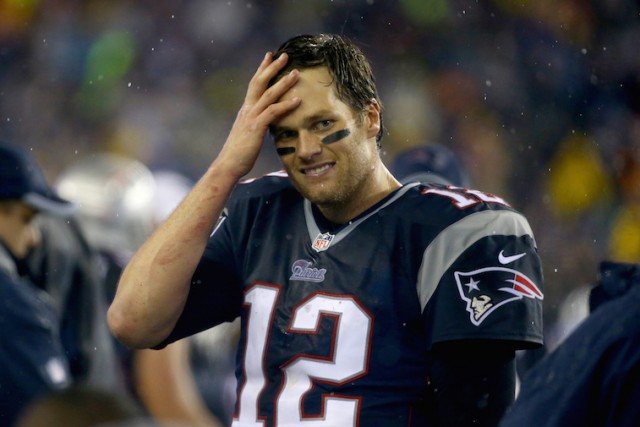 There’s nothing wrong with drinking water while you eat. | Al Bello/Getty Images

Brady apparently thinks that water can do a lot more than protect you from a sunburn. In his book, he instructs readers to abstain from drinking water during meals because it messes with your digestion. (Yes, the same water that he reportedly has purified with 72 special minerals.) Not surprisingly, there is no proof that water negatively impacts digestion.

But at least Brady wants his water purified, unlike his buddy Trump who recently rescinded water pollution regulations that can make our water less safe to drink.

They both have an odd obsession with dessert

Although, to be fair, their desserts of choice are quite different. The POTUS is a big fan of sugary chocolate cake and vanilla ice cream — and reportedly gets more scoops than everyone else who dines at the White House.

Brady, on the other hand, is and avid fan of avocado ice cream, which at least sounds healthier. (If you check out Business Insider’s take on remaking the ice cream, there appears to be an unhealthy amount of cacao powder in it. Also, it reportedly tastes terrible.)