Vladimir Putin’s Intense Workouts Will Put Yours to Shame

Vladimir Putin frequently makes headlines for plenty of reasons outside of his personal life. This time, we took a behind-the-scenes look at what the 65-year-old President of Russia does day to day — specifically, his workout routine. Incorporating swimming, weight lifting, and a slew of other activities, it is more intense than we thought, but it doesn’t start until he wakes up around noon. Must be nice.

It all starts with quail eggs

He is very specific about his breakfast. | iStock.com

… a side of quail eggs, that is. Putin starts off his morning with a nice-sized omelet (sometimes porridge), along with a side of quail eggs and some fruit juice. Although this seems like a hefty breakfast for someone who is about to do two hours’ worth of swimming, it does hit all the nutrition targets a breakfast should.

Then, he’s off to the pool

His cardio picks are giving us workout Inspo. | Giphy

Instead of lounging in his best pastel suit, he swims laps for about two hours. One of his three dogs, Koni, a black Labrador, usually waits patiently poolside for the president to finish up his swim.

This is Putin’s last workout before he officially starts his day. He lifts weights for a while before taking on those precious tasks associated with being president. It seems like it must be dinner time in Russia at this point, but according to Newsweek, Putin is a night owl who does his best work after dark. 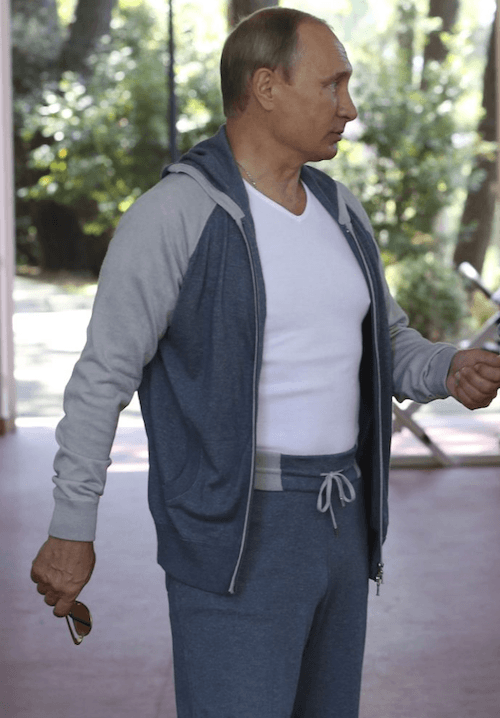 Putin does not purchase his workout outfits in Target’s sale section. In 2015, the Russian president was photographed wearing a $3,220 Lora Piana track suit. The suit sells separately; the jogging pants cost $1,425 and the bomber-style zip up costs $1,795. The suit is made up of cashmere and silk — not as sweat-proof as a Nike top, but at least he gets style points.

He enjoys a hockey match or two. | Giphy

To make a workout a little more fun, Putin shakes off stress with some ice hockey, usually against some of his body guards. He even once scored eight goals in an exhibition game with former NHL players. Putin took up hockey in more recent years to help promote the sport throughout his country.

He says no to alcohol

Could this be the secret to those hard abs? | Sergei Ilnitsky/AFP/Getty Images

Grueling workouts aside, alcohol is one thing Putin typically avoids, with the exception of formal receptions. While it may be Putin taking a stand against Russia’s excessive alcohol use, it also does help him wake up a little easier for those intense workouts.

Sometimes, his workouts get a little more adventurous

He keeps his workouts interesting. | Giphy

Putin’s workout regimen is not all pools and weight rooms. Putin has been photographed honing his athleticism in a variety of different ways. When the President of Russia wants to get a little more creative, he goes scuba diving, horseback riding, and even dog smooshing. This seems like an active schedule for a man who prides himself on his late starts to the day, but any workout that involves dogs is a workout we can get behind.