Want Shoulders Like ‘The Rock’ Dwayne Johnson? Use These 5 Lifts 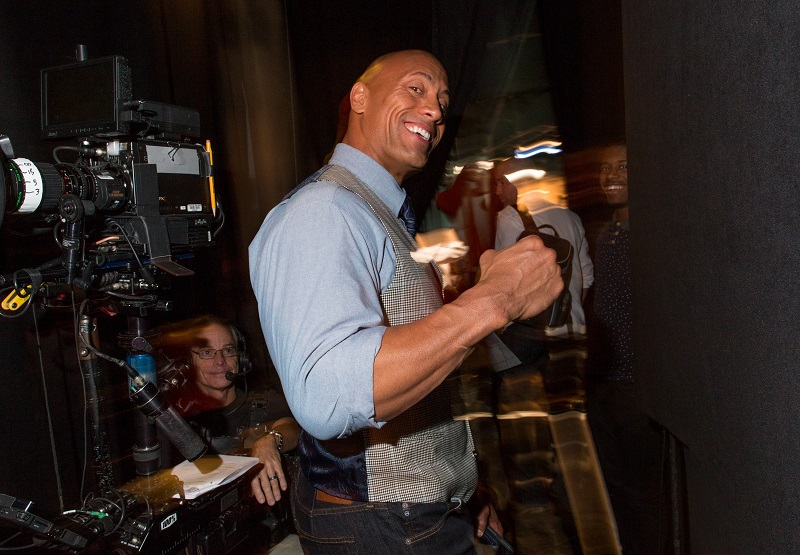 “For ‘Hercules,’ I went for the demigod look: big and mean,” Dwayne “The Rock” Johnson said of his role in 2014’s Hercules, per Bodybuilding.com.

“When you’re playing a character like the son of Zeus, you only get one shot. The intensity of the training was definitely up, as was the volume of training.”

And the results of that increase in intensity and volume are obvious. Just check out the trailer for Hercules below:

Training for a role that requires the physique of a Greek god is, as you may imagine, insane. Johnson is already famous for having an absolutely incredible training regimen, but for the role of Hercules in particular, he had to make some tweaks. That included a wake-up time of between 3 and 5 a.m. for an hour and a half of training (before hitting the set), and a daily intake of nearly 5,000 calories.

Of course, one of the most adamant features of Johnson’s physique, even outside of his Hercules role, is his massive upper-body — his shoulders and arms, in particular. To achieve and maintain such a massive and intimidating form, Johnson hits the weights six times per week. And he hits them hard.

Muscle & Fitness has profiled his shoulder workout routines, pointing out specific alterations from other traditional regimens that Johnson uses. For example, he trains his biceps and triceps on the same day, and goes for three sets per exercise, rather than four. There are also numerous sources that delve into the particular lifts Johnson incorporates into his routine.

The good news is that you can strive for the same look — though it will take some work. But you don’t have to hit the gym for umpteen hours every week; we can get you started with five relatively easy lifts to incorporate today. For shoulders like The Rock, try these five lifts to get you started.

One way to kick off your quest for huge, Rock-like shoulders is to start using the heavy dumbbell shrug as a key component of your lifting regimen. The exercise itself is simple enough to pull off — it’s essentially the act of picking up two massive, heavy dumbbells, and shrugging. But make sure you’re getting the movement and form down; you don’t want to roll your shoulders, which could result in injury. Instead, give your traps a heavy dose of the action. Shrugs can also be done with a barbell too, if you’d rather.

The military press is a fairly common lift, and can be done from either a seated or standing position. The lift itself consists of using a barbell (or dumbbells, if need be) to push weight from your chest, just below your chin, above your head. This lift really works your shoulders, so if you’re just starting out, be sure you’re using an amount of weight you can readily deal with. You don’t want to risk injury, or even the chance of falling over due to too much weight. Take it slow with the military press, and make sure to keep your body straight, with little or no rest between reps.

Like the military press, the lateral raise lift targets your shoulder muscle in a most exquisite way — so make sure you’re dealing with a manageable amount of weight. Since your deltoid muscles will be getting a hell of a workout, you’ll need to make sure you keep proper form; it’s easy to cheat and sag a bit while conducting the lateral raise. Muscle & Fitness suggests holding onto a bar or pipe for stability, which will also help take undo pressure off of other parts of your body. Remember to keep your reps smooth, slow, and controlled, and you’ll be building a solid foundation of muscle in no time.

The reverse fly, like a few other shoulder lifts, can be done in a couple of different fashions. First, you can do it standing on the ground, bent over. Or, if you’d prefer, you can do it on an incline bench, facing the ground. Either way, you’re going to give your shoulders a pounding. The lift requires you to grasp dumbbells in each hand, extend them straight out in front of you, and pull the weight back, so that your body resembles that of a bird in flight — hence, ‘flyes.’

The dumbbell front raise, a lift Dwayne Johnson uses to keep up his mammoth shoulders and arms, is extremely similar to the lateral raise, covered previously. The difference is in the name; that is, you’re lifting the dumbbell in front of your body, rather to the side. As with the lateral raise, make sure your form is down, and your stance is solid.

Add this lift, and the others, to your routine, and you’ll be building mountainous shoulders and arms in no time.