The Ways a Nuclear Blast Would Affect Your Health

We no doubt live in the age of advanced technology. It’s amazing to think of how far we’ve come, but there are drawbacks. You might love the advancements made in medicine, gaming, and tech, but what about weaponry? Gone are the days of bayonets on the battle field — we’re now entering a time when nuclear weapons are on the rise.

So, what can you expect from a nuclear explosion? You might have some idea of the effects, but we’re here to share all of the ways your health may be compromised. And don’t worry, we have some survival tips, too.

Your lungs and ears would be severely affected. | iStock.com

Being within a hundred miles of a nuclear blast wouldn’t just affect your physical features — the pressure would mess with your insides, too. A passage from The Medical Implications of Nuclear War explains soldiers during World War I and II frequently experienced “blast lung” from explosions. Essentially, the pressure of a nuclear attack causes the chest to compress against the spine and then quickly release. This can cause hemorrhaging, fluid buildup in the lungs, and major issues with your heart, all most likely resulting in death.

And don’t expect your delicate eardrums to get away unscathed. One blast wave is enough to cause a rupture and permanent hearing loss.

Fallen buildings can cause you serious harm. | iStock.com/AndreyKrav

If you’re surrounded by tall buildings when a nuclear blast comes your way, then you’re at particular risk of getting hit with debris. The Medical Implications of Nuclear War states most of the wounds from survivors of blast injuries are abrasions and fractures from debris thrown at high speeds. There might not be too much you can do to avoid flying debris, but NPR notes it’s a good idea to wear a bicycle or football helmet during a tornado to avoid injury if hit in the head by high-velocity remnants. While this isn’t the same scenario, the idea might help you get to safety while protecting your noggin.

This might be one of the most terrifying features of a nuclear explosion. Michael Mills, an atmospheric chemist, told Wired that as soon as a nuclear bomb goes off, fires will start. And this isn’t your typical fire — these storms could be large enough to suck in people and buildings from the intense winds. They’d be hot enough to burn through concrete, and the rise in atmospheric temperature would be too unbearable to live through. ScienceDaily also notes the main firestorm can produce smaller fire tornadoes that can spread the problem even farther. Even if you survived the initial storm, you have the damage to the ozone layer and rising temperatures to deal with.

Flying debris is one concern, but the radioactive particles from a nuclear blast would pose an even bigger issue. Brian Martin, an honorary professorial fellow at the University of Wollongong in Australia, explains the remnants of a nuclear bomb would first rise upward into the atmosphere in the event of an explosion. The problem here is that what goes up must also come down, meaning the remnants would plummet back down to the ground and also adhere to pebbles, stones, ash, dust, or even rain. Because ash and dust can take days, or even weeks, to return to the ground, you’ll be exposed to scary amounts of radiation for long periods of time.

Martin notes many believe it’s this radioactive fallout that would cause the death of most people during nuclear warfare because it has the potential to spread so far. Hopefully we’ll never find out.

5. Radiation sickness from the blast …

So, what’s the big deal about radiation exposure from a nuclear bomb? Your cancer risk rises dramatically. Greenpeace International explains you’re first likely to get radiation sickness, which includes nausea, vomiting, and injury to your intestines. This in and of itself could lead to a lot of death from dehydration, even in developed countries, because the hospitals would be so saturated with patients in the event of an attack. And eventually, the exposure could cause many different cancers, most notably lymphomas and thyroid cancer.

6. … and radiation from the sun

The sun would be way more intense. | iStock.com/Dean_Fikar

Here’s where things get really concerning — while the bomb itself would expose you to high levels of radiation, it’d also do mega damage to the ozone layer, as we previously mentioned. Not only does this have major consequences for the environment, but it also means your protection from the sun is limited. The Guardian claims the ozone layer could be depleted by as much as 40% in areas with dense populations. By the poles, though, it could be depleted by as much as 70%.

If you’re pregnant during a nuclear blast, birth defects are possible. | iStock.com/shironosov

If you’re pregnant during a nuclear explosion, your baby could also be affected. The Centers for Disease Control and Prevention notes pregnant women who are exposed to high levels of radiation may give birth to a child who has impaired brain function, physical abnormalities, or even cancer. If the mother is close to a detonated nuclear bomb, then there’s also probably a higher chance of having a miscarriage. This situation gets even worse for expectant mothers who are wounded by the blast and have radioactive substances enter the bloodstream through their injuries. The substance can then internally pass to the child in this instance.

If a nuclear blast does occur in your lifetime, hopefully it’s not during cold and flu season. The Radiation Effects Research Foundation says your immune cells are sensitive to radiation as it is, so a nuclear blast would likely kill the cells that help your body defend against bacteria and viruses. This can lead to a lot of immediate infections following a blast. And try imagining how crowded the hospitals would be during this type of emergency — you might not get the immediate care you’d need to survive.

During an explosion, here’s the golden rule: Don’t look directly into the flash. Radiation Emergency Medical Management explains you can burn your retinas doing this, causing permanent damage. If you don’t look into the blast and it’s broad daylight when it occurs, there’s a good chance you’ll only experience a quick bout of blindness that lasts less than two minutes. But even this can cause major problems. Can you imagine if you’re driving when this happens?

Nuclear fallout doesn’t just affect humans — it also affects wildlife and crops. Even if nuclear warfare were to take place on another continent entirely (the study, Nuclear Famine: Two Billion People At Risk? uses a hypothetical war in South Asia), it would have global consequences. The study notes nations that typically export food would likely panic and hoard it in the event of a nuclear blast to ensure they can feed their own people. This, of course, becomes a downward spiral of reduced food supply worldwide. And because the blast would cause major climate change and reduced rainfall, it’d be tough to grow your own crops. Starvation would be a real threat for many.

A nuclear blast could affect you mentally. | iStock.com/Marjan_Apostolovic

In the event of a nuclear blast, your entire life would change even if you did survive seemingly unscathed. Perhaps you’d grow paranoid about the unseen radiation that could be lurking. Or maybe you’re worried about drinking the water and eating the produce grown in your area. Even worse, you might have to evacuate, causing you to lose touch with family and friends. The Guardian notes thousands of survivors of radiation emergencies have developed PTSD, depression, and anxiety. An incident such as this could have major mental health consequences.

The long-term effects of nuclear warfare

The long-term effects could be devastating. | Don Emmert/AFP/Getty Images

One nuclear blast might only affect that particular region of the world, but we know what you’re thinking — what would happen in the long run if multiple blasts were to occur? Popular Science gives an example of what would happen if, say, 100 nuclear warheads were to detonate. All of the horrifying things previously mentioned are likely to occur, but five years later, the earth would cool by about 3 degrees Fahrenheit. Though the planet would eventually warm up slightly again, this change would have a major impact on crop production and climate change. The risk of starvation wouldn’t just be in the short-term — you’d be dealing with shortened food supply for decades.

Also, don’t expect the earth to look the same. Alan Robock, a professor in the department of environmental sciences at Rutgers University, tells TIME the sky would look dark and gray, and areas that are usually lush with crops and greenery would look a lot starker. Nuclear fires can also produce soot for about five years. It’d almost feel like you were living in a chimney.

The worst things to do during a nuclear blast …

Maybe you’re currently living in the city, and all of this news about a sudden, destructive blast has you ready to move to the countryside. While you might be ready to jump ship, it may not be in your best interest. NBC News says radioactive fallout can be carried through the air for miles — which means it can reach you way outside of the blast site.

Another thing you shouldn’t do? Get in your car and start hitting the road as soon as you hear the blast. Even if you’re 50 miles out and think you can escape, you should seek shelter immediately and get out of the open air. If your kids are at school, leave them there — it will be safer than entering a radioactive atmosphere.

Here’s what you should do. | Joe Raedle/Getty Images

Now that you know you need to take cover immediately, where’s the best place to go? The Department of Homeland Security recommends finding a building with brick or concrete, as these sturdier structures are more likely to stand up to the high winds generated by the blast. Also, get to the center of the building and go as far down in the ground as you possibly can. You’ll want to be as far from the radiation as possible.

Make sure you’re in a place with enough food and water to last you awhile, too — you should expect to stay there for at least 24 hours. If you were outside at the time of the blast, make sure you remove your clothing once you find shelter, too.

Who currently has nuclear weapons? 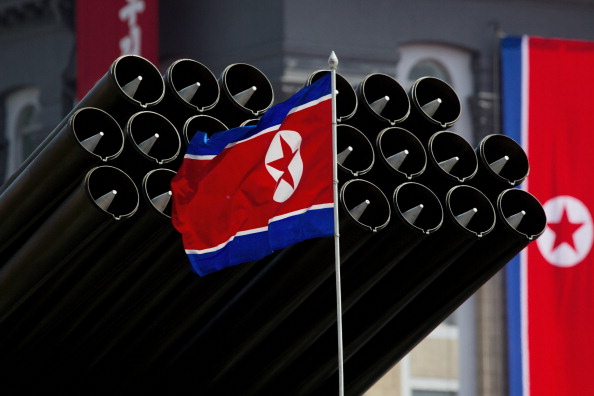 North Korea is one nation in the possession of nuclear warheads. | Ed Jones/AFP/Getty Images

Now remember — you don’t need nuclear warfare for there to be a devastating blast. NBC News reminds us more than two dozen nations currently use nuclear power. As far as weapons are concerned, this number is much smaller. Only nine countries currently have weaponry.

Don’t let this small number fool you, though — the publications notes The Ploughshares Fund estimates there are still over 15,000 nuclear weapons worldwide, most of which are owned by Russia and the U.S. Though the number of nuclear weapons owned by each country isn’t totally clear, North Korea is still the biggest mystery, and Russia seemingly holds the most.