Presidents make history as leaders who pushed health care to the forefront or lifted the country from recession. Others are remembered for having a quirky pet or for their stature. And while every president leaves an indelible mark on the country’s fabric, the 45th president will undoubtedly make history in his own way. Here are some ways Donald Trump may be remembered (No. 12, 14, and 15 are are all doozies).

Trump stole the “oldest inaugurated president” title from Ronald Reagan who was 69 years old when he took office, whereas Trump was 70. And while Barack Obama and John F. Kennedy Jr. were both young presidents, the youngest person to assume the office was Theodore Roosevelt, who was 42 years old, according to U.S. News and World Report.

Next: He’s never served in the military nor has a political background.

2. Trump entered the job with no political or military experience

He doesn’t have this type of experience. | Jim Watson/AFP/Getty Images

Unlike his predecessors, Trump had no political or military experience when he took the job, Vox reports. At least every previous president had some political experience with the exception of Zachary Taylor, Ulysses S. Grant, and Dwight Eisenhower. However, those men spent significant time in the military.

He isn’t one to reach for an alcoholic drink. | Election 2016 via Giphy

Rather than having cocktails with world leaders, Trump would rather dive down a bottle of Diet Coke than a handle of whiskey. Trump claims to have never had a drink, possibly because his brother died from alcohol abuse at a young age.

Next: Rather than draining the swamp, he added more rich white people.

The collective wealth of Trump’s cabinet is possibly more than $35 billion, BBC reports, which exceeds the annual gross domestic product of Bolivia. Ironically, one of Trump’s campaign promises was to “drain the swamp” and appoint working-class Americans to cabinet posts.

Next: Trump is also part of the rich white guy club.

5. Trump is the richest person to become president

Trump fits right in with his cabinet, as his net worth is about $3.7 billion, Business Insider reports. George Washington previously held the title of “richest president,” and if John F. Kennedy lived long enough to inherit his father’s wealth, he would have joined the billionaire list.

Next: He’s had more wives than any president in history.

He’s been up at the altar many times. | Bob Strong/AFP/Getty Images

While he isn’t the only president to divorce, Trump is the only president with two previous divorces, who went on to marry again, CBS News reports. Reagan divorced actress Jane Wyman before marrying Nancy, while John Tyler and Woodrow Wilson became widowers who married again while in office.

Next: Trump’s current wife makes history in her own way.

7. Melania Trump is the only first lady without an American parent

People were quick to notice this about her. | Chip Somodevilla/Getty Images

Trump’s third wife, Melania, is the only first lady who does not have at least one American parent, Vanguard reports. Born in Slovenia, Melania is also the second first lady to be born outside the country. John Quincy Adams’ wife, Louisa, was born in England to an English mother but had an American father.

Next: Trump is most recently known for being on reality television.

8. Trump’s last job was as a reality television personality 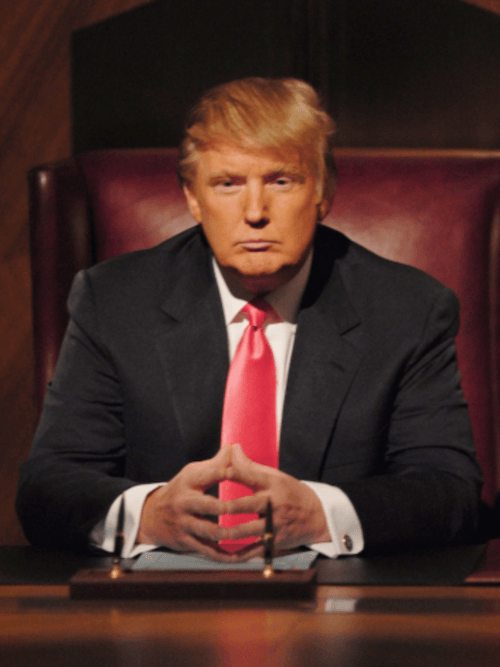 He was television star before running for president. | NBC

Although Reagan was an actor prior to taking political office as California governor, Trump may be the country’s first president with a reality television background. He was the host and executive producer of the reality business show The Apprentice, and critics find parallels between Trump’s reality television world and how he runs the White House.

Next: Trump’s five children are split up between three women.

9. Trump is the baby daddy to three different women

He’s had children with each of his three wives. | John Moore/Getty Images

Next: Trump hires Kellyanne Conway to be the first GOP female campaign manager.

He hired Kellyanne Conway to work for him. | Paul Morig/Getty Images

Kellyanne Conway became Trump’s third and final campaign manager, marking the first time a woman led a GOP presidential candidate to victory. Despite being Trump’s point person during the election, Conway wasn’t convinced he would win, even going on job interviews in anticipation of being unemployed post-election, Business Insider reports.

Next: Conway isn’t the only woman Trump tapped to become part of his inner circle.

11. Trump appointed the first Indian-American woman to a cabinet position

Nikki Haley was the first Indian-American woman to be part of the presidential cabinet. | Michael Loccisano/Getty Images

Another woman who is part of the Trump team is Nikki Haley, the first Indian-American woman to become part of a presidential cabinet. Haley became the U.S. Ambassador to the U.N. early in Trump’s presidency, even though she was a vocal opponent of the president, initially endorsing Senator Marco Rubio, according to BBC.

Next: The Trump slump is real.

12. The worst job approval rating in history goes to Trump

No other president in modern U.S. history has job approval ratings as low as Donald Trump, according to Vox. Polling company Gallup tracks the president’s ratings on a weekly basis and compares them to how other presidents rated over the last several decades. The average approval rating for U.S. presidents from 1938 to 2018 is 53% and Trump’s average remains significantly lower.

Next: Maybe a pet could help Trump to lighten up?

13. Pets are a no-show at the White House

Will Trump carry on this tradition? | Chip Somodevilla/Getty Images

Previous White House pets included pups like Bo and Buddy, but so far Trump hasn’t found his presidential pet. The Presidential Pet Museum tracks America’s “first pets” since 1953 and Trump is the only president who has yet to welcome a pet to the White House.

Next: Trump may have better luck finding love with a pet than in his hometown.

14. Trump is despised by his hometown

While most presidents are hometown heroes, most folks in Trump’s hometown of New York City feel quite the opposite. But it didn’t take becoming president for New Yorkers to dislike Trump. Joyce Purnick from New York Daily News wrote in 2011 about how Trump was “ruled by his ego, not reason” and a “snot-nosed kid all grown up.”

Next: And it’s not just New Yorkers who dislike him.

15. The Trump presidency prompted the largest protest in U.S. history

Women and men joined together in protest. | Mario Tama/Getty Images

The election of Donald Trump drove the largest single day of peaceful protests in U.S. history, according to The Independent. Up to 4.6 million protesters joined the slew of Women’s Marches held across the country on January 21, 2017, without a single reported arrest. The movement’s mission is to dismantle systems “of oppression through nonviolent resistance and building inclusive structures guided by self-determination, dignity and respect.”