The job of President of the United States is arguably one of the most stressful positions ever. Expert physicians have speculated that holding the position alone can take nearly six years off the leader of the Free World’s life.

Some presidents have handled the taxing job better than others: A few have ranked as one of the country’s “fittest guys,” while others have nearly broken White House bathtubs. Trainers and White House staff have revealed the surprising and occasionally super odd fitness habits of these well-known presidents. You’ll be shocked who combined running with McDonald’s (page 4), but first, let’s look at why being president is so bad for your health.

Study reveals the stress takes nearly 6 years off your life

Being under constant stress can take nearly six years off of your life. | Alex Wong/Getty Images

A study published in the British Medical Journal found that world leaders live an average of 2.7 fewer years than runners-up. The authors of the paper measured leaders in 17 countries against their runner-ups and found that the winners tend to have a 23% higher risk of premature death.

The U.S. leaders were the worst affected, living on average 5.7 years less than their runners-up. According to Anupam Jena, a senior author on the study, “The increase in mortality among those leading a nation, relative to others in politics, may stem from the greater responsibility and stress of the job … The decisions are more impactful, the spotlight is greater, and I suspect the job is even more strenuous.”

Next: Here’s how these presidents managed their fitness while in office

Theodore Roosevelt was a fan of jiu-jitsu. | Hulton Archive/Getty Images

Some presidents were downright buff, and Theodore Roosevelt is among them. Roosevelt was trained in Jiu-Jitsu under professor John O’Brien and had, “holds which can be used in all circumstances under which a man may be attacked.”

Tim Blessing, a professor of history and political science at Alvernia University in Pennsylvania who has studied presidential fitness since 1972, said that Roosevelt’s fit physique could have saved him during an assassination attempt in 1912. “They said if he hadn’t had so much chest muscle it would have killed him and went into his heart,” Blessing said.

Next: This game was a president’s idea of a fit activity.

You could call John Quincy Adams a gambling man. | Library of Congress/Wikimedia Commons

The game room is a known staple of the White House and has received its fair share of renovations over the years. A notable one was John Quincy Adam’s addition of a billiards table during his presidency in 1825. A “social man who liked to keep moving,” Adams chose to install the first billiards table for his own “exercise and amusement.”

Next: This president had some contradictory fitness habits.

A run followed by McDonald’s

Not many people would recommend McDonald’s after taking a jog. | Wikimedia Commons

Bill Clinton’s exercise habits were a Secret Service nightmare. The president, known for his scanty jogging shorts, liked to use his runs as his private time. Easier said than done when you’re the most-known person in the U.S.

“He dealt us this nightmare,” Dan Emmett wrote in his book detailing his time as a U.S. Secret Service Agent. “The worst thing for the Secret Service is to take a sitting president into public when no one has been swept and anyone could be out there.” Clinton was known to go for a jog and follow it by grabbing a bite to eat at McDonald’s.

Next: This president took to extreme outdoor sports to curb his appetite for exercise. 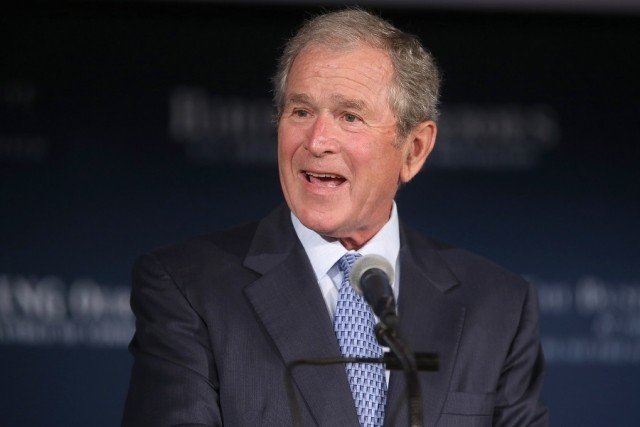 In 2006, the Associated Press reported that Bush switched his running sneakers out for biking shorts. Bush made weekend cycling his weekend ritual. “He’s an avid rider, a fanatic,” said Matt Mannelly, president of Bethel, Conn.-based Cannondale, who hadn’t publicized but confirmed what he called an unsolicited gift to Bush a month ago. “We also made it very clear we wouldn’t do anything to market this. To give it to someone like the president, who’s actually going to use it a lot, means a lot to us.”

Next: This president celebrated his exit from office in a unique, fit way.

Obama is a fan of kitesurfing. | Pete Souza/The White House via Getty Images

Barack Obama has a disciplined workout routine. He has been spotted on numerous occasions using treadmills at Planet Fitness, and his affinity for pick-up basketball games is secret to none. Men’s Fitness has previously named Obama one of the country’s “25 Fittest Guys.”

Headlines took the internet by storm when Obama was seen kite surfing with his friend, Richard Branson, in the Virgin Islands amidst the stress of the 2016 presidential elections. “Freed from the constraints of the White House, former President Barack Obama surfed up a storm,” NBC News wrote.

Next: This president kept a regimented diet.

“I eat no bread but one piece of toast for breakfast, no butter, no sugar, no sweets. Usually have fruit, one egg … so — I maintain my waistline and can wear suits bought in 1935.”

Next: The current president’s fitness goals are less desirable than his predecessors.

President Donald Trump is known for his love of fast food and disdain for regular exercise, excluding the occasional round of cart-supported golf. The oldest president to ever enter office at age 70, Trump’s diet and fitness regimen are ones that Business Insider claims a doctor “wouldn’t advise for a 20-year-old.” Trump’s favorite dietary staples include an overcooked stape, Domino’s pizza, KFC, and McDonald’s.

As for sleep, Trump has said he needs only three or four hours a night. Most people are considered as impaired as if they were drunk after multiple nights of little sleep, although usually, we can’t tell.

Next: This president took one of the slowest sports and made it extreme.

Ranked as one of Golf.com’s top presidential golfers, the elder Bush was known for his speedy swing. “If everyone played as fast as President Bush, we’d never see a round longer than 3 hours and 30 minutes. Forget about John Daly: Bush 41 was the original grip-it-and-rip-it,” the site said.

Next: Some presidents required an uninterrupted, consistent sleep schedule.

Calvin Coolidge, the 30th POTUS put a notable emphasis on his sleep cycle. He was known to sleep 11 hours every day. Coolidge retired to bed at 10 p.m., woke up between 7 and 9 a.m. and always made time for an afternoon nap that lasted two to four hours.

Next: This president’s stress-reliever was part muscle, part home improvement.

We can imagine how chopping wood could be a huge stress reliever. | Keystone/Hulton Archive/Getty Images

Ronald Reagan’s stress reliever and physical activity of choice was none other than chopping wood. Reagan’s rural property in the Santa Ynez Mountains was fondly called the “Ranch in the Sky,” and served as his “sanctuary” throughout his presidency.

Reagan personally tended to the property whenever he had a chance, noting often that the place was for ranch work. He cut his own wood — enough to build a fence that welcomed guests upon their arrival. Reagan, a former actor, even wrote a story for PARADE in 1983 that he titled, “How to Stay Fit: The President’s Personal Exercise Program.”

George W. Bush makes the list again for his commitment to running. In 2002, George W. Bush told Runner’s World that, “Usually I run 6 days a week. When I don’t run, I use an elliptical trainer, lift weights and stretch. But when I run, I run hard.” The 43rd President of the United States even ran the Houston Marathon in 1993, finishing in 3:44.

Attending to both domestic and foreign policy matters and relations means a ridiculous amount of travel, however. Bush had a treadmill installed in Air Force One so that he could exercise on-the-go.

Next: This president installed a practical addition to the White House.

Swimming laps at the White House

Gerald R. Ford was an avid swimmer and installed an outdoor pool on the White House grounds in 1975. Ford swam almost daily and was too daunted by the price it would take to reopen FDR’s pool, which existed where the press stood at that time.

Before he was a casual swimmer, Ford was an impressive athlete: He played on two national championship football teams at Michigan, was a team MVP in 1934, and ran and played tennis.

Next: This president’s daily swims took place in an unconventional location.

Daily swims in the Potomac River

John Quincy Adams was a fan of skinny-dipping. | White House

John Quincy Adams makes the list again for his daily swims. His rigorous morning ritual involved a two-mile walk around Washington in the winter and a skinny-dipping session in the warmer months.

Next: The president that inspired an active nation despite his personal ailments.

JFK was a great athlete during his youth. | National Archive/Newsmakers

The youngest man ever elected to the presidency at age 43, John F. Kennedy, was a letter-winning athlete in his youth. He played touch football and swam at Harvard University. He was a reportedly good golfer, as well.

However, by the time Kennedy took office, various physical ailments like his Addison’s disorder and chronic back pain, prevented him from practicing what he preached. He was still very effective throughout his presidency at getting the American people moving. Kennedy promoted physical fitness early on, acting as “the spark that got the whole fitness movement going in the United States.”