What Really Happens When You’re Awake Under Anesthesia

It sounds like a horror story: You go in for a common surgery, and suddenly you realize you’re awake on the operating table when you’re supposed to be unconscious. It’s rare, but anesthesia awareness does happen, and when it does, it’s horrifying.

So how does this happen and what does it feel like? These unlucky patients will never forget their experiences.

This woman was awake and felt pain, but couldn’t move

This is a true horror story. | Hin255/iStock/Getty Images

In 1998, Carol Weiher was having her right eye surgically removed when she woke up to the sound of disco music. Then she heard a voice saying “Cut deeper, pull harder.”

Weiher desperately wanted to tell the doctors she was awake, but the muscle relaxant they’d given her prevented her from moving at all. Fortunately, she didn’t feel pain — only pressure — but the surgery was over five hours long. Eventually she passed out, but when she woke up after surgery, she was screaming that she was awake.

Next: Sometimes you only hear things subconsciously.

This is uncommon, but can happen. | iStock.com/monkeybusinessimages

In the 1980s, a woman had a procedure to remove cancer from her abdomen. The surgery was a success, but the woman became anxious in the weeks following, becoming convinced she was dying. When her surgeon reassured her the cancer was gone, she blurted out “You didn’t get the black stuff!”

The surgeon remembered that he’d been complaining to his colleague during the woman’s surgery that he couldn’t get the black mold out of his bathroom. The woman had heard him somehow, and his words had lodged in her mind.

Next: This man experienced a living nightmare.

This man remembers people ‘tearing at me’

What do your doctors do when you’re out? | iStock.com/xmee

In 2004, a 60-year-old man checked in for a gastric bypass surgery and a gallbladder removal. When he was in the recovery room, a nurse asked him if he was in pain, and he answered, “Not now, but I was during surgery.”

The man had woken up to voices around him and “unimaginable pain” along with the sensation that people were tearing at me. He wanted to alert the surgical team, but his body didn’t respond to his brain’s commands. He said he wished he was dead.

Next: Warning: This story will make you cringe.

The event may lead to psychological damage 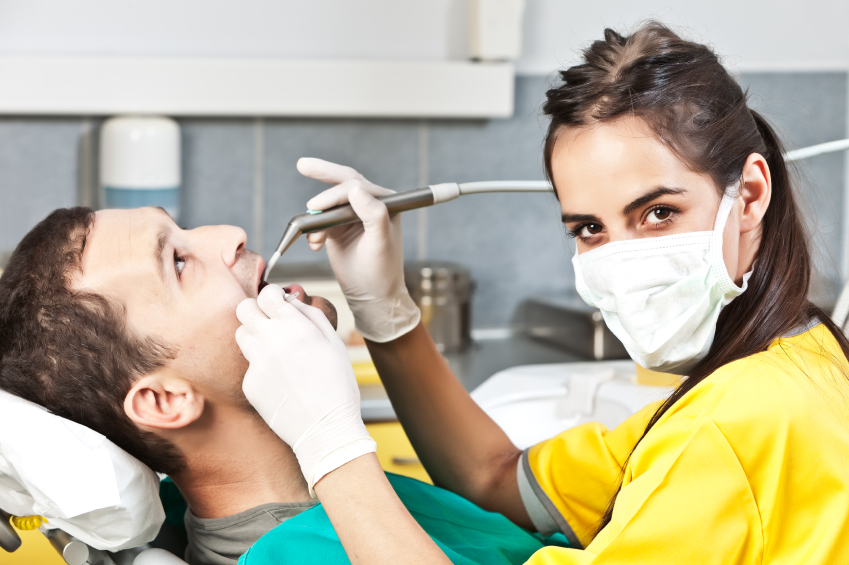 This dental horror story will remind you to be careful with who you trust. | iStock.com

Diane Parr went to the dentist for a routine tooth extraction. She felt relaxed as the anesthesia set in, but when she woke up again, the surgeon was leaning over her and pushing down on her body to yank the tooth out. Parr said it felt like her tooth was coming out of her foot rather than her mouth — and to make matters worse, the tooth had cracked and was coming out in fragments, so the surgeon proceeded to cut into her gum line with a scalpel. Unfortunately, the ordeal left Parr with lasting psychological damage.

Next: Your reaction make freak your doctor out.

Your doctors may be as freaked out as you are

No one wants this to happen. | Darren McCollester/Getty Images

Sometimes waking up during surgery isn’t that bad. A 19-year-old Polish woman named Iga Jasica once woke up during brain surgery when her anesthesia wore off and casually asked the doctors, “How’s it going?”

Luckily, she didn’t feel anything — and the doctors said that even though her brain wasn’t exposed, she wasn’t in danger. Not everyone gets so lucky.

Next: Here’s how this nightmare happens.

What is anesthesia awareness?

The good news is, anesthesia awareness is rare. In the past 20 years, developments have dramatically improved patient safety and comfort during surgery. But clearly, it’s still happening.

Most patients who experience some kind of awareness during surgery don’t feel pain. Awareness ranges from brief, hazy recollections to specific awareness. Some procedures are performed under local or regional anesthesia with modest levels of sedation, so patients may have varying levels of recollection.

Next: If you’re scheduled for surgery soon, read on.

Can you prevent this from happening to you?

Since anesthesia awareness is rare, your odds of experiencing it are slim (about 1 in 10,000 patients are affected). But since it’s understandable to be concerned, talking to your doctor before your procedure may help ease your mind. Your doctor may set up a consultation with your anesthetic provider.

During your preoperative meeting, you and your anesthesia provider can discuss your options and choose the best and safest treatment for you during your operation. Be open and honest about your medication history, medication use, and your lifestyle habits (including alcohol and drug use). The more information they have, the better off you’ll be.