The Secrets Behind Which Chain Restaurants Support Liberal or Conservative Views, Revealed

Whether you prefer McDonald’s to Burger King or, Denny’s to IHOP, there’s a chain restaurant everyone loves. And while your favorite fast food joint may not share its political point of view with its customer base, chances are, it probably sways one way or another. Some CEOs have come forward with their left- or right-leaning ways. Others, however, have kept quiet — until now.

Curious to see if your favorite chain restaurant is in line with your personal political viewpoint? Here’s where some of the most popular eateries stand.

Chick-fil-A has a long history of opposing the LGBT community, ThinkProgress reminds us. And while the company vowed to stop giving so much money to groups with anti-LGBT agendas after they made national news in 2012, tax documents show this didn’t last long. In 2014, Chick-fil-A gave over a million dollars to the Fellowship of Christian Athletes, a group strongly against homosexuality.

Though Chick-fil-A may be aiming to change its ways in the future, there’s no doubt they lean on the conservative side as of now.

Next: Hillary Clinton was spotted eating at this liberal fast food joint.

Millennials are a huge fan of Chipotle. | Saul Loeb/AFP/Getty Images

Back in 2015, Chipotle was one of the first restaurants to announce it was doing away with genetically-modified ingredients, Eater says. Though scientific studies are finding GMOs are just fine for consumption, this move really resonated with Chipotle’s millennial customer base. And, it was a good message to all other fast food brands that the company has great concerns for the environment, which has subtle liberal undertones.

And of course, the image of Hillary Clinton eating at the restaurant helped their left-leaning image, too.

Next: This pizza place is known for its conservative viewpoints.

Pizza Hut is a fan of Republicans. | Kevork Djansezian/Getty Images

In more recent news, Saudi Arabia is also boycotting Pizza Hut since Trump decided Jerusalem is the capital of Israel.

Next: This coffee giant leans on the liberal side.

With their push toward sustainability, this shouldn’t be too much of a surprise. And The Washington Post notes some even speculate the previous Starbucks CEO, Howard Schultz, may be eyeing a 2020 presidential run. He would run for the Democrats against Trump, as he’s specifically called the Republican leader “a president that is creating episodic chaos every day.”

And that’s not all — Schultz also vowed to hire more refugees following the president’s travel ban. And he’s also publicly endorsed Hillary Clinton in the past.

Next: This pizza place received tons of backlash for its ultra conservative views.

Papa John’s has not been shy about it’s conservative views. | Spencer Platt/Getty Images

If you’re a fan of Papa John’s pizza, you’re probably aware of the noise CEO John Schnatter made recently. In 2012, Schnatter said he opposed Obamacare since it would cost the company $5-8 million annually, Business Insider reports. Schnatter also donated $1,000 to Trump’s campaign, but didn’t publicly support the president during that time. He also believes in a more Republican business approach in that he wants businesses to be less regulated by the government so they can thrive.

Next: This favorite burger joint takes a left-leaning stance.

This fast food place isn’t too loud with their politics, but they certainly sway left on the political spectrum. Eater says CEO Danny Meyer banned tipping at all of its restaurants and raised the prices on the menu to make up the difference. While this doesn’t seem particularly political, Meyers implemented this rule in part because tipping is often discriminatory toward people of color. And, the no-tipping policy keeps wages consistent and fair for all workers. This small act leads many to believe that Shake Shack is more on the liberal side.

Next: Here’s another famous burger place — but this time, they lean right.

As for right-leaning burger restaurants, White Castle is certainly in this category. Forbes notes the CEO and grandson of the founder of the company donates almost exclusively to Republican candidates. And White Castle’s vice president said the GOP tax bill will greatly help the company and working class Americans in general. Vice President Jamie Richardson tells Fox Business, “It’s the biggest good thing for small business in three decades and a generation.”

It’s true that Trump saw a donation of $266 from one Dairy Queen employee during his campaign. But overall, this restaurant specializing in fast food and frozen treats swings left. The Huffington Post explains Warren Buffet’s company acquired Dairy Queen in 1998. And Buffet himself has openly supported Obama during his first presidential run. Also, though Buffet is certainly part of the 1%, he supported higher taxes for the rich — a very liberal stance indeed.

Next: Love waffles? You may visit this conservative breakfast chain.

Next: Not all fried chicken is liberal, but this restaurant leans that way.

It’s safe to say that Popeyes is a liberal restaurant. | Joe Raedle/Getty Images

This restaurant chain is pretty quiet with their politics, especially when compared with the other chicken fast food giant, Chick-fil-A. The Huffington Post says Popeye’s doesn’t have a political action committee they can directly track, but the company chairman donates to Democratic politicians in Florida. He’s also a man of science, as he serves on the National Stem Cell Foundation to promote and fund research. Considering Paul Ryan voted against stem cell research four times, this definitely puts him on the opposite end of the political spectrum.

Next: Here’s the fried chicken place for the conservatives. 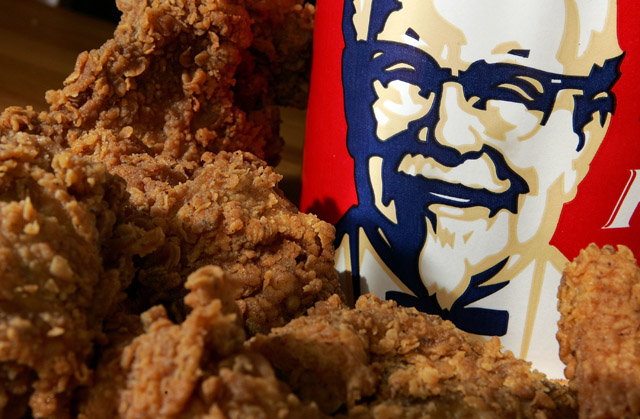 For those who want to support Republican ideals along with their bucket of fried chicken, KFC is the place to go. Forbes notes Yum! Brands, the parent company of KFC, Taco Bell, and A&W, gave 87% of its donations to Republicans in the 2012 election cycle. And in 2016, Yum! also gave over $2,o00 to the Every Republican is Crucial PAC that promises to “return us to our conservative roots,” says Eater.

Everyone’s favorite soup and sandwich place swings to the left when it comes to politics. During the 2016 election cycle, Panera gave 68% of their donations to Democrats, says Eater. And The Huffington Post says the company’s founder and CEO gave $30,000 to the DNC during the 2012 election cycle. Additionally, he donated $5,000 to Barack Obama.

Next: This world-famous fast food restaurant welcomes all, but is conservative at heart.

You’ve certainly been to this fast food restaurant. And Eater says during the 2016 election season, McDonald’s gave 63% of its donations, which equalled nearly $2 million, to Republicans. While it’s clear where the company’s PAC stands, typically the workers of fast food restaurants lean more liberal. In the case of McDonald’s, the opposite is true. McDonald’s workers also donated over $3,000 to Trump’s campaign.

Next: One of McDonald’s competitors also donates more to Republicans.

The redheaded lady seems to lean toward the right. | Jim Watson/AFP/Getty Images

Forbes notes Wendy’s fairly donates to both parties — but they’re also more partial to the red. Throughout the 2016 election cycle, Eater reports Wendy’s donated nearly $700,000 to Republicans. And in 2012, the billionaire chairman contributed to Mitt Romney and Herman Cain’s campaigns. And so far in 2018, OpenSecrets.org reports Wendy’s is strongly in favor of the right as per usual, with 90% of their contributions going to the Republican party.

Next: This pancake restaurant made waves following an anti-Clinton tweet, so we know where they stand.

We still aren’t completely sure which side of the bridge IHOP is on. | Wolterk/Getty Images

We know IHOP for their many pancake options more so than for their social media, but after the company shared an anti-Clinton tweet, it seemed clear which party the company favored. The Washington Examiner explains IHOP reposted a tweet from one user that said “Hillary Clinton had a major garbage campaign.” IHOP deleted the tweet and maintained that they were hacked after the fact.

Twitter aside, Eater says DineEquity, the parent company of IHOP, gave 96% of their donations to the GOP in 2016.