Tiger Woods can’t seem to stay out of the spotlight. He’s already received criticism once before for a scandal involving his now ex-wife. He’s also been arrested for reckless driving.

Caught up in yet another scandal — this one involving his ex-girlfriend Kristin Smith — there’s now a legal issue involved. And he’s threatening to fight back with an unexpectedly dirty move.

The couple broke up after Kristin Smith accused him of cheating

He has a record for cheating scandals. | Kinnaird/Getty Images

Tiger Woods and Kristin Smith started dating in 2015. She reportedly broke up with him in 2017 after claiming he had cheated on her, even though he denied the accusation. Unlike many celebrity breakups, this one didn’t end with the two parties quietly going their separate ways.

Next: Woods took an extra step to salvage what remained of his reputation.

He may have offered her money to keep the affair private 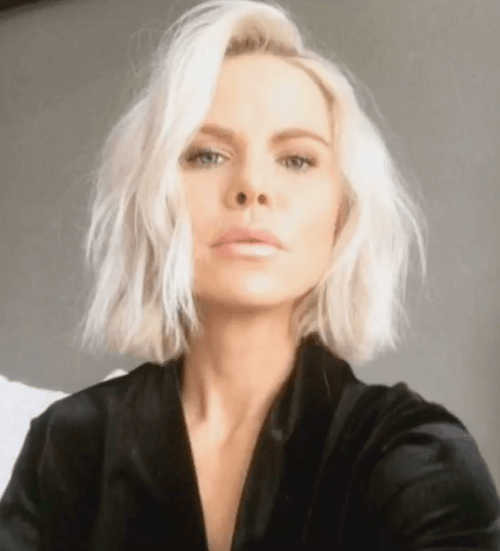 Is she being paid hush money? | TEXRAY CO., LTD via YouTube

It might be more common than you think for a celebrity to pay someone a large sum of money in exchange for their silence. Harvey Weinstein did it. Trump’s lawyer did it, too. Apparently, Tiger Woods also offered Smith a monetary incentive — and a contract — to discourage her from speaking up.

Next: What do Woods’ ex and Trump’s alleged mistress have in common?

Kristin Smith and Stormy Daniels have something in common

Does this situation sound like something you’ve heard before? Plenty of celebrities have attempted to provide “hush money” in hopes their scandals won’t go public.

In 2018, Stormy Daniels started talking publicly about her alleged affair with Donald Trump, even though a contract apparently forbid her from doing so. Smith’s story is playing out in an eerily similar fashion.

Next: Does their agreement actually count?

Smith claims the agreement is ‘nonenforceable’

It’s not clear whether Smith actually signed any official agreement or accepted payment to keep quiet about her ex’s infidelity. She’s using that argument to defend her right to speak about what happened, even though she’s gotten a pretty serious threat from her ex in response.

Woods apparently still wants her to honor the contract

Lindsey Vonn found herself in a similar situation. | Timothy A. Clary/AFP/Getty Images

He allegedly threatened to release “embarrassing pictures” of her if she did not follow the nondisclosure agreement and keep the details of the affair to herself. This feels a lot like a forced repeat of the nude photos that leaked in 2017 featuring Woods and another ex, Lindsey Vonn.

Next: Woods lied, and the consequences are probably worse than he imagined they’d be.

He seems to be avoiding a certain situation. | Andrew Redington/Getty Images

Couldn’t Woods have avoided a legal scandal if he’d just admitted he cheated in the first place? Why offer Smith money to stay quiet when, in the end, she spoke up anyway? He’s previously admitted the inappropriate nature of his behavior but possibly wanted to avoid another direct hit to his image.

Next: This isn’t the first time Woods has gotten in trouble for cheating.

Woods apparently hasn’t learned from his past mistakes

Tiger and Elin Woods ended up divorcing due to his cheating scandals. | Harry How/Getty Images

He and his wife divorced in 2010 after she found out he had cheated on her with multiple women while they were together. You’d think a big scandal like that would make him think twice about repeating the behavior, but some people never learn.

Next: A new book reveals more details about Woods’ upbringing and troubling past.

How his parents treated him very differently 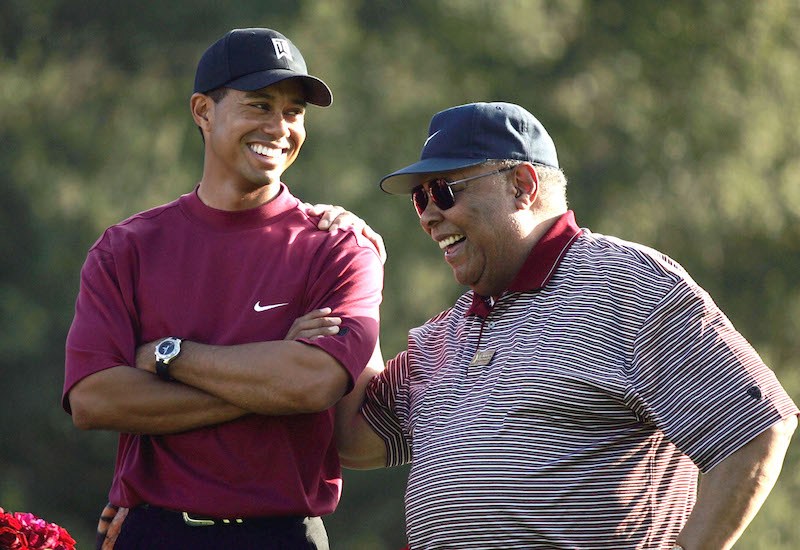 In a new book titled Tiger Woods about golf’s most recognizable figure, authors Jeff Benedict and Armen Keteyian conducted hundreds of interviews with people involved in many different aspects of the athlete’s life. Their reporting with those close to the golfer over the years is meant to give some fresh perspective on who Woods really is.

The book dives into Woods’ unusual upbringing and how he was a stuttering, lonely child whose parents — Earl Woods and Kultida Punsawad — influenced his life, career, and who they wanted him to be.

Tiger’s inability to show gratitude, apologize, or express appreciation was rooted in his warped upbringing. His mother pampered him like a prince, and his father rarely uttered the words “thank you” or “I’m sorry.” Tiger learned early and often that his needs were all that mattered. His unapologetically self-centered attitude was critical to his success in golf, but it had an utterly devastating impact on the way people perceived him.

When Woods’ father died from cancer in 2006, the golfer said his dad was his “best friend and greatest role model.”

Woods’ had a contentious round of golf with Bill Clinton 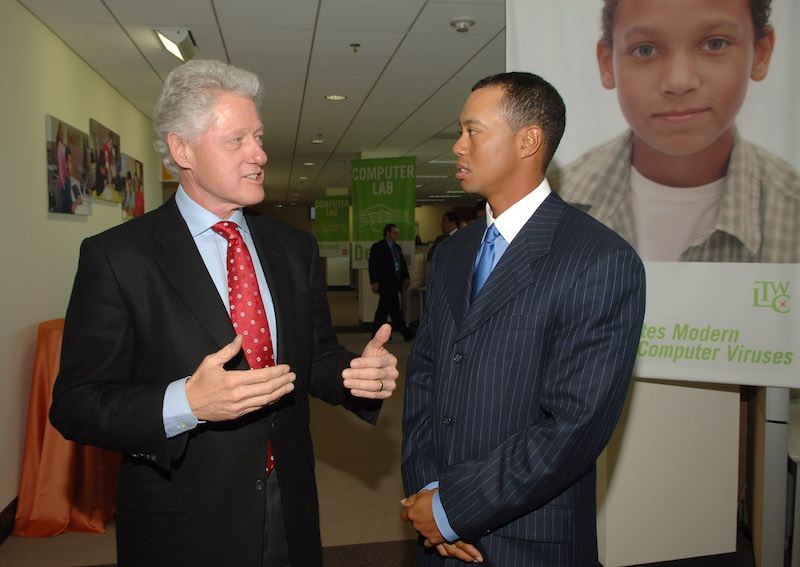 A story that really sticks out in the book is how Woods acted when former President Bill Clinton agreed to attend a function for Woods’ foundation in 2006. Although there is a backstory about how Woods was rude to Clinton prior to his people asking the politician for a favor, Clinton agreed to appear at the function if Woods played a round of golf with him.

But it was during that golf game that witnesses said the athlete paid no attention to anyone else in the group. They recalled Woods being on his phone most of the time, riding in a golf cart by himself, walking off the green while others were still putting, and laughing when Clinton made a bad shot.

“He was really obnoxious,” an observer said. “It was so clear to me that day who Tiger really was. I’ve never seen the president more put off by a person than that experience.”

He may have refused to sign picture for the former president 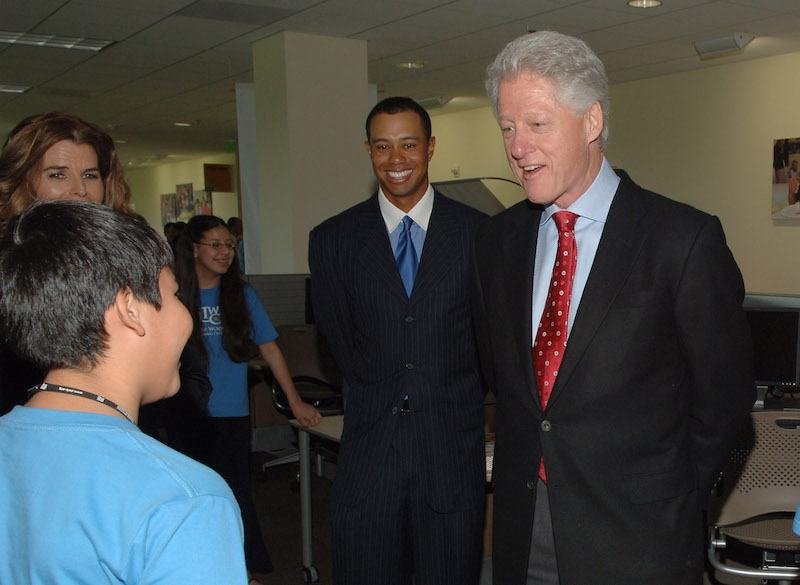 The athlete reportedly hesitated to sign a photo for the former president. | Lester Cohen/Getty Images

Following the contentious round of golf, Clinton’s office sent Woods a picture of the two men together that was going to be framed and asked whether Woods could personalize it. After several months passed and the office still did not get the photo back or hear from Woods, an employee called to find out where it was. Woods then reluctantly just signed his name on it and sent it back.

“Clinton hauled his ass out West, and you can’t sign a picture?” said a longtime staffer to the former president. “The whole experience was a lot of ‘I’m Tiger Woods, king of the world, go f**k yourself.'”

Next: Woods chooses whom he wants to acknowledge. 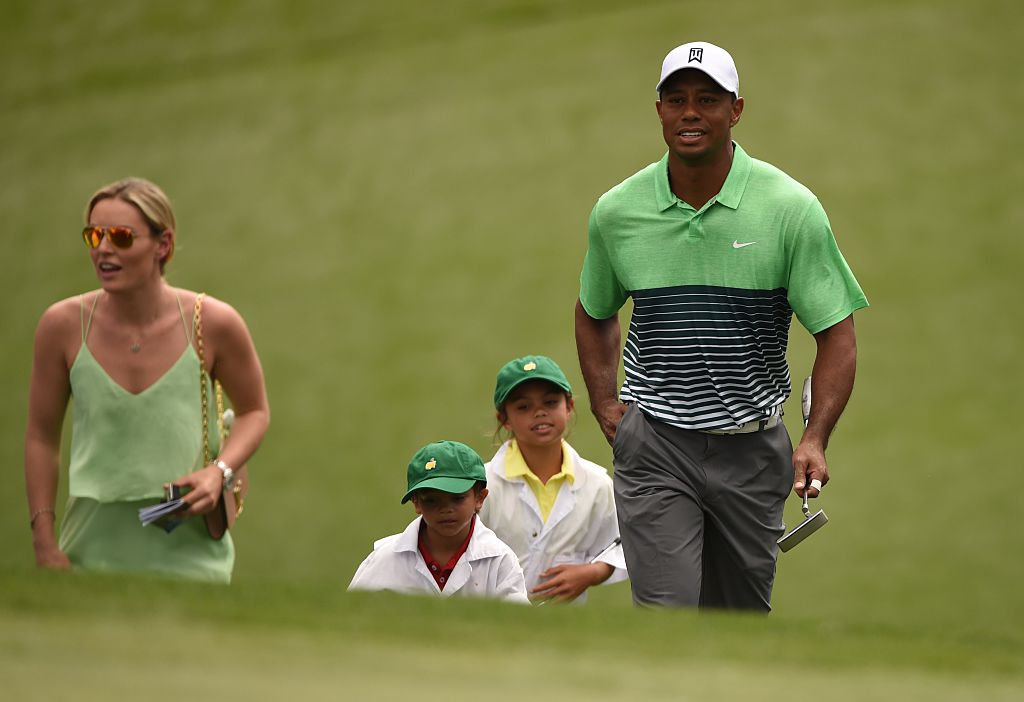 Tiger Woods walks the fairway with Lindsey Vonn and his children Charlie Axel and Sam Alexis. | Timothy A. Clary/AFP/Getty Images

There were many other people who don’t have fond memories of meeting the golfer either. In 1998, while staying at a house fellow golfer Mark O’Meara was renting out. Woods went over to the neighbor’s house and met a woman named Peggy Lewis, who actually owned the property where the golfers were staying.

The woman was excited to tell Woods that they were staying in her home, but when she extended her hand to greet him, he ignored her gesture and just went on looking for O’Meara’s wife, Alicia.

“Humiliated, Lewis quietly sat down as Woods walked out, never acknowledging her,” the authors wrote.

Next: He had to do this while in sex rehab.

He confessed to infidelity as part of his sex rehab program

Of course, the authors could not ignore what happened on Thanksgiving night in 2009 when Woods’ then-wife Elin Nordegren discovered that the athlete had been cheating on her and chased him out of their mansion wielding a golf club. The rest of the world soon learned about Woods’ infidelity, and he checked himself into a sex rehab.

While in sex addiction treatment at the Pine Grove facility in Hattiesburg, Mississippi, Woods had an hour-long session with Nordegren, in which he confessed to all the extramarital affairs he had while they were together.

The couple eventually divorced in 2010.

Next: Was human growth hormone used in his recovery?

HGH was used in Woods’ recovery after knee surgery?

Was this drug used as treatment for the athlete? | Kevin C. Cox/Getty Images

Another bombshell the book describes is Woods’ treatment by Dr. Anthony Galea, the doctor who was arrested in 2009 for smuggling HGH into the United States. A source told the Benedict and Keteyian that following Woods’ 2008 knee surgery, Galea used PEDs to aid in the golfer’s recovery process without Woods’ knowledge.

That claim, however, has been denied by another physician, Dr. Mark Lindsay, an associate of Galea’s who also saw Woods during his rehabilitation following the surgery.

Woods did not participate in interviews with the authors of the book himself but did authorize Lindsay to speak with them.