Workouts That Don’t Work: 6 Exercises You Should Never Do

Most people have a hard time mustering the will to get to the gym, and the last thing anyone wants to do once you’re there is to waste your own time. But that’s precisely what a lot of gym-goers do. By engaging in useless exercises, or simply doing certain exercises incorrectly — they’re negating any positive impact the exercises may have had, or even hurting themselves in the process.

Unfortunate as it is, gyms and fitness centers are littered with equipment and machines that simply don’t provide much benefit. Yet, people climb on them all day, believing that they’re putting in some serious muscle-building work. Well, fear not, because we’re here to clear the air a little bit, and give you heads-up as to what exercises you can purge from your routine, and what you can do instead.

The upright row, demonstrated above, is an exercise that is rather commonplace at many a local gym. The problem is that it’s not very effective, and can actually lead to injury. To get specific, the upright row puts your shoulders at risk of pinching or tearing tendons and ligaments, due to the internal rotation movement of the exercise. Instead, stick to overhead or military presses to build your shoulders and arms.

The Smith machine is a source of much controversy. That controversy is explained and explored fairly well in the video above, so take the time to watch it. Though there are many who swear by Smith machine squats, the general consensus seems to be that gym-goers should avoid them, and stick to traditional squats. The issue is squatting is a complicated compound lift, requiring the coordination and strength of the entire body. The Smith machine throws that all off, and instead isolates stress to certain muscles.

Tricep kickbacks used to be a bit more common, but you still see a good amount of people doing them, dumbbell in hand. The move itself simply consists of drawing the dumbbell behind you, stretching your arm straight out. The problem is that there isn’t much resistance in doing this, and thus, little actual work being done. Some trainers have offered up different ways to do them, which make them more efficient. But if you’re aiming to build your triceps, best stick to dips or push-downs.

You may not be familiar with the name, but you know an abductor machine when you see one. It works like a giant Thigh Master, in a way, and is built to help you work your hips and upper legs, even your core. But it’s a joke, and few serious trainers would ever ask a client to climb on one. The problem is that it’s an unnatural movement, and one that can put undue and serious stress on the body parts you’re trying to strengthen. Alternatives? Try lateral or single-leg squats.

Odds are, you haven’t done a superman in quite a long time. Keep it that way. The exercise is ridiculous, and an utterly useless addition to your workout regimen.

If you don’t remember what supermans are, check the video above. Yes, they may force you to strain on the floor for a minute or two, but they aren’t really doing anything — there’s no resistance, and you’re not really working any muscles. All you’re really bound to do is strain your back. 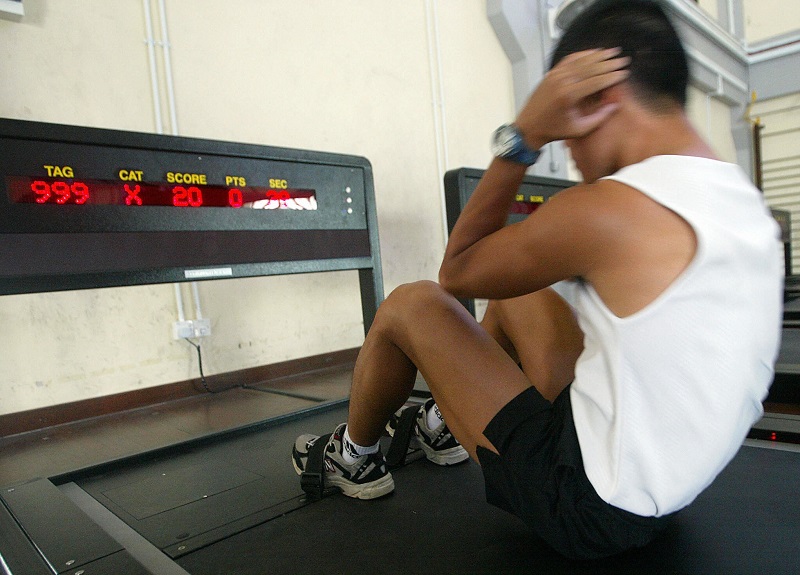 Choose an exercise other than sit-ups. | Roslan Rahman/AFP/Getty Images

We mentioned sit-ups and crunches would appear on this list, and here they are. It may come as a surprise to a lot of people to see this common and popular exercise on a list like this, but there’s a reason for it. People typically bust out a million sit-ups because they want six-pack abs. Well, this isn’t the way to get them — the only way, really, is through a squeaky-clean diet.

Sit-ups are ineffective, and can strain your lower back and certain core muscles. There are other ways to hit those core muscles — like squats and deadlifts — and you should stick to those.