Starbucks knows how to get you to spend money. It knows what you like and how to get you to keep coming back. Whether you’re in it for the breakfast food or the blended drinks, there’s something there for everyone. And not all of it is worth buying. The worst drink you could ever order at Starbucks is basically a dessert item that a barista has shoved into a blender and mixed with coffee. It probably tastes good. But you definitely don’t need it.

These are the worst drinks on the menu, ranked from terrible to probably not advisable for human consumption (and wait until you see what made No. 1). This healthy-looking smoothie is packed with sugar. | Iambella228 via Instagram

Don’t order a Starbucks smoothie and expect it to do your body any good. Smoothies contain about just as much sugar as some Frappuccino drinks. And they aren’t even made with fresh whole fruit.

A grande smoothie provides 300 calories and only 1 gram of saturated fat. There’s a decent amount of protein in there, thanks to the whey powder. Unfortunately, it also contains 41 grams of sugar. You can decide whether the benefits are worth the sweetness.

Next: Aren’t spices supposed to be good for you?

This indulgent latte is also full of sugar. | Starbucks

Is a Chai Latte really as healthy as it seems? It’s the least calorie-dense drink on this list, only adding 240 of them to your daily total. But it doesn’t get any better from there.

As with most of these drinks, sugar is the ingredient that ruins an otherwise harmless beverage. Though 42 grams might not seem like a lot, looking at the other ingredients, it makes up the majority of the drink. You’re drinking spicy sugar water that sort of tastes like tea.

Next: It’s the simplest chocolate drink on the menu.

This hot chocolate has more calories than a meal. | Starbucks

Sure, it’s your favorite drink whether it’s the middle of summer or so cold outside it hurts. But a Hot Chocolate from Starbucks — grande sized — has 10 grams of saturated fat and 43 grams of sugar.

At 400 calories, it’s not the worst drink on the list. In fact, if you order it without whipped cream, you can cut out 4 grams of fat and 80 calories, which is a slight improvement.

Next: This chocolate drink isn’t any better.

You might want to steer clear from this fat-laden drink. | Starbucks

In the mood for a White Chocolate Mocha? It’s just like hot chocolate but with more caffeine. Your two favorite things have come together at last, and the results are questionable.

It has 30 more calories than a grande hot chocolate, 2 more grams of saturated fat, and 10 more grams of sugar. You can ask for the drink without whipped cream. That will slightly reduce its fat and sugar content — though not by much.

Next: This sneaky drink wants you to believe it’s good for you. It isn’t.

Even if you skip the whip, this drink is full of sugar and fat. | Starbucks

The Green Tea Crème Frappuccino isn’t as healthy as its name wants you to think it is. It has green tea in it! That means it’s good for you, right? If only.

Sorry, but matcha isn’t so good for you when it’s mixed with too much sugar. It provides 450 calories, 9 grams of saturated fat, and 65 grams of sugar — and it’s mostly the whipped cream’s fault. Take that away, and you’re down to 320 calories and only 2.5 grams of fat. But you’re still doomed for a sugar overdose. 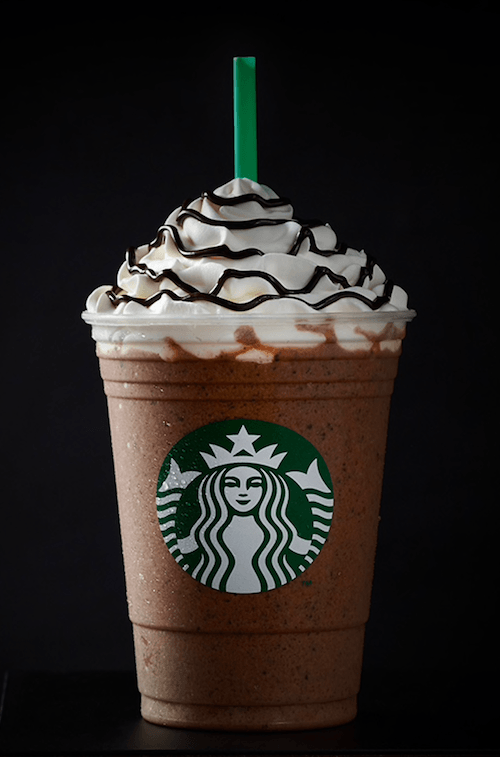 This sugary drink might leave you feeling sluggish and bloated. | Starbucks

The Java Chip Frappuccino is a lot like a cookie, but blended. Actually, you’d probably be better off with a cookie instead of 470 calories’ worth of liquefied disappointment.

You think you need that mocha drizzle and all those Frappuccino chips (Starbucks’ special brand of chocolate chips). But be honest with yourself. Is the deliciousness really worth 12 grams of saturated fat and 66 grams of sugar? Think how you’ll feel an hour after drinking it. Probably not great.

Next: Cinnamon syrup tastes a little too good, it turns out.

Craving some dessert? This drink is exactly that. | Starbucks

The Cinnamon Roll Frappuccino tastes just like everyone’s favorite dessert-for-breakfast treat — and it’s just as terrible for you.

It’s not the worst drink you could ever order at Starbucks because it’s 510 calories or because it has cinnamon sprinkles. There are 85 grams of sugar in every grande drink — and that all comes from cinnamon syrup and white chocolate mocha sauce. Is it OK to have it every once in awhile? Sure. But you probably don’t want to make it a daily order.