The deals, the access to organic meats and produce, and the various household items available for purchase are just a few reasons as to why we can’t get enough of Costco. And surely, we’re not the only ones. Shoppers have been singing the praises of this store for ages due to its healthy options and great prices.

Not everyone wants to pay for their Costco merchandise, however. In fact, many shoplifters have taken some truly strange items from the store in the past. (Check out a seriously unsanitary stealing situation on page 6, too.)

Is it easy to steal from Costco? | Joshua Lott/Getty Images

You probably know Costco best for its food, but that’s not the only merchandise that gets taken. Fox26 reports the pair of shoplifters would enter the Fresno, California, store location and load up an empty office chair box with electronics. One of the crooks would then take the chair box to the register and purchase the alleged chair inside. In reality, however, the criminals walked away with thousands of dollars in small televisions and computers.

Since then, Costco has been well-advised to check what’s inside the boxes before allowing customers to purchase the merchandise.

Next: We can’t believe someone actually stuffed their purse with these foods.

2. This woman stole string cheese, garlic, and sausage by putting it into her purse 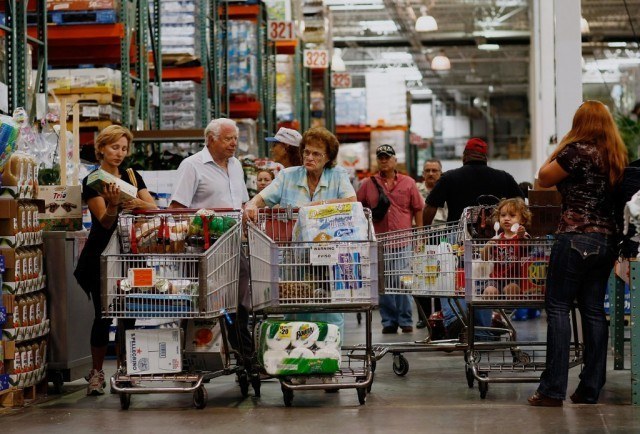 This woman had a low key method. | Joe Raedle/Getty Images

This one’s truly bizarre. DNAInfo explains 56-year-old Susan Boimal slipped a few items into her purse whilst shopping at Costco that she didn’t intend to pay for. When a security guard approached her about the items, they found it was stuffed with Polly-O string cheese, razor blades, garlic, socks, kishka sausage, and swimming gear.

If this wasn’t her first haul, we’re hoping she at least didn’t keep the garlic or cheese stored long. Garlic needs good air circulation, or else it’ll mold. And soft cheeses need to be refrigerated for safety.

Next: These thieves took off with a ton of merchandise.

A Long Island Costco was robbed around Christmas in 2017 — and this time, the thieves were after jewelry. CBS New York reports a glass case filled with jewelry worth up to nearly $100,000 was broken into on Christmas Eve. It was suspected that it may have even been an inside job committed by two Costco employees.

This sounded like a serious heist, but Oprah reminds us people steal more often than you think. And some compulsive shoplifters get into huge trouble when the habit becomes an addiction and mental health disorder.

Next: This is one food item that’s stolen way more often than you think.

4. All types of mixed nuts are frequently stolen in bulk

Nuts can be expensive, so sometimes they get stolen. | Amarita/iStock/Getty Images Plus

It may seem odd, but it turns out nuts like cashew, almonds, and pistachios are frequently stolen. And Quartz notes over 30 truckloads of nuts were stolen from growers in California in just six months time. Many of these nuts were on their way to places like Costco.

So, why nuts? Their long shelf life, hefty price tag, and lack of tracking make them an easy target for thievery. Also, it’s a lot less suspicious to be driving around with a truck full of nuts than a load of electronics.

Next: These thieves weren’t the smartest of the bunch.

How did they manage to steal laptops? | Ipopba/iStock/Getty Images

The Huffington Post calls this group of shoplifters the “dumbest” ever, and for good reason. Two thieves ran into a Costco and emerged with thousands of dollars worth of merchandise. The stolen items included vacuum cleaners and laptops — and they thought they would easily get away with their crimes. Unfortunately for them, police found their escape route and their getaway driver before they even left the store.

One of the men had a large knife on him, too, indicating that perhaps it was a Costco robbery that took place. Either way, someone yielding a weapon isn’t something we want while shopping for groceries.

Next: This was totally unsanitary.

6. Another woman stole shrimp, steak, and chicken by stuffing them into her skirt

This method was a risky one. | /iStock/Getty Images

Yes, this did really happen. Twenty-six-year-old Krystal Douglas and her accomplice, a 68-year-old man, went on a wild Costco shoplifting spree back in 2012, Jezebel reports. They managed to steal shrimp, steak, chicken legs, pork chops, and some other non-perishable clothing items. The publication notes Douglas would put the items up her skirt, the two would leave with a magically empty cart.

They were caught after Douglas was caught walking funny in the parking lot. And of course, the act of putting food up your skirt is a serious health concern.

Next: This woman did something highly illegal with her stolen merchandise.

7. An employee stole dust cleaner for huffing in the bathroom

In April 2018, one woman was accused of stealing dust cleaner from Costco, which also happened to be her place of work. ClickOnDetroit reports she was then allegedly found huffing the product in the bathroom.

Huffing may seem less dangerous than other drugs, but the severe side effects are well-known. Let’s hope she was able to get help before more serious issues, such as kidney, liver, or brain damage, took hold.

Next: This man decided to go full Grinch on this Costco.

How exactly did he manage it? | Nelosa/Getty Images

Who manages to steal 1,000 Christmas trees from a Costco? A man in South Florida, The Florida Times-Union reports. Back in 2015, the police said two semi-trucks full of Christmas trees were stolen sometime after 8 p.m. one night. Together, the total cost lost of the trees and the trailer was nearly $100,000.

There’s plenty of literature to suggest a real Christmas tree has health advantages over a fake one — but this just seems overkill.