No matter how tough you think you are, there’s no doubt you’d crack under the pressure of the Russian prison system. Spending time in jail is no joke, and it can be terrifying for even less serious offenses. But when it comes to maximum security, it’s a whole other story — and that’s particularly true for Russian prisons under Putin’s rule.

Here’s a look inside the most terrifying prisons in Russia, including ones where cannibals, terrorists, and some of the world’s worst criminals are held. (And see what Russia’s most notorious cannibal, who lives in one of the prisons, has to say on page 7).

1. As 1 prison lieutenant says, the only way to escape Black Dolphin prison is to die

It is nearly impossible to escape the prison. | Sakhorn38/iStock/Getty Images

Most prisoners see an end date to doing time, but that’s not the case for inmates at Black Dolphin. Business Insider reports one prison lieutenant even told National Geographic that the only way you’ll ever leave this specific prison is if you die.

Black Dolphin is near the border of Kazakhstan and houses roughly 700 inmates at a time. And it’s not just anyone who goes here. Only the worst in the nation will see Black Dolphin. Altogether, it’s estimated that the inmates have killed a combined 3,500 people.

Next: Their cells are unlike any other in the world.

2. Inmates are kept behind three sets of bars at Black Dolphin 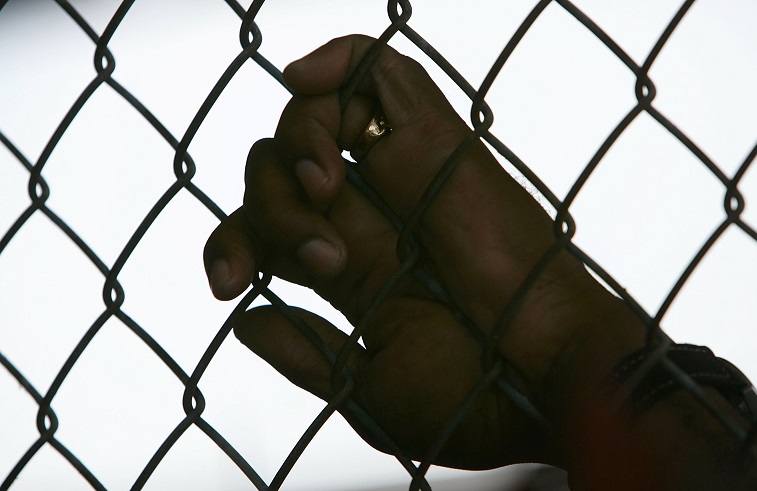 The prisoners are kept behind three sets of bars. | Mario Tama/Getty Images

When it comes to Black Dolphin, the guards aren’t messing around. In fact, to keep themselves safe from the highly dangerous inmates, they lock the prisoners in cells behind three separate sets of bars, The Sun reports.

Murad Gazdiev, a reporter for RT, traveled to Black Dolphin to talk exclusively with guards and prisoners about their experience. One inmate, Igor Tischenko, told RT, “It is so easy to turn into an animal here. But staying human [is] harder. That’s why we try — both with each other and with the administration — to stay human.”

Next: Here’s how guards keep prisoners from escaping.

3. They have to walk bent over so they don’t learn the prison layout

The guards have to take extra precautions. | DVB60/Getty Images

Black Dolphin guards take extra precautions to ensure no prisoner ever escapes. And so far, they’ve done just that. One of their tactics is to have inmates walk hinging at their hips with their heads bent down so they can’t see or understand the prison layout, the New York Post reports. Sometimes, inmates are even forced to be transported blindfolded.

As for how the prison workers feel about this, guard Denis Avsyuk told National Geographic that he has “never felt any sympathy for them.”

Next: They don’t do exercise like any other prison.

4. Inmates get their exercise by walking around a tiny concrete yard

The inmates don’t spent too much time outside of their cells. | Nasis/Getty Images

While some prisons give inmates plenty of time to be outdoors, such is not the case with Russia’s max-security establishments. The New York Post explains inmates at Black Dolphin get 90 minutes a day outside of their cell. And they spend their hour and a half in a concrete exercise yard that has absolutely nothing in it.

At Black Eagle, another Russian max-security prison known for its severity, prisoners get just one hour a day to walk around a room that doesn’t have a roof, The Guardian reports.

Next: Inmates don’t even leave their cells for meals.

5. Their meals are given to them in their cells for safety reasons

The prisoners don’t eat together in a cafeteria. | Manuel-F-O/iStock/Getty Images

The prisoners don’t even get to leave their cells for mealtime at Black Dolphin, the New York Post explains. When it comes to meals, they are given soup and bread four times a day. And they’re to eat their meals within their isolated single cells.

For extra security measures, RT explains there are also no cells located on the ground floor of the prison. This design was done so that prisoners can’t tunnel their way out.

Next: Here’s what one prisoner has to say about his experience.

6. This inmate, who killed an entire family, explains what being under constant watch is like

There’s no such thing as privacy at Black Dolphin. As for inmate Nikolai Astankov, he told National Geographic that the atmosphere is absolutely stifling, the New York Post reports.

“You are constantly being filmed in your cell, so you’re being watched around the clock,” Astankov said. He also mentioned that guards make their rounds every 15 minutes to check on the inmates, so you “must constantly be attentive.” As for his crimes, he reportedly killed an entire family and burned their bodies in the forest.

Next: This cannibal’s story is truly chilling.

As for the most terrifying criminals at Black Dolphin, Vladimir Nikolayev might be the scariest one. According to the New York Post, Nikolayev got into a bar fight when he accidentally killed a man. Then, he decided to eat him.

“I cut off his head, arms legs and all of a sudden something kind of struck me and I thought I would try him,” Nikolayev said. He also claimed he then gave some of the meat to his friend, who then gave it to his wife to make dumplings out of. “I said it was kangaroo, we don’t have kangaroos around here,” Nikolayev continued. Creepy.

Next: This murderer says he finally sees the error of his ways thanks to Black Dolphin.

8. Another murderer says the years in prison make you see how wrong your crimes were

The prisoners have time to think about their grave mistakes. | iStock.com

Do the prisoners ever feel bad about their crimes? Though they may be considered some of the most dangerous in the world, it turns out quite a few do repent.

Dmitry Bantyukov, one of the prisoners at Black Dolphin who killed his own family, told RT that eventually, you start to understand the gravity of your situation. “I think there are few people left in here who think they did the right thing,” Bantyukov said. “The years show you that you were wrong. Totally wrong.”

Next: The guards may be committing crimes of their own, too.

9. There have been several accounts of guards brutalizing inmates

The guards have gotten into trouble too. | Allanswart/Getty Images

It seems there are issues within the prison system, too. According to NPR, human rights authorities are claiming abuse in some Russian prisons is so bad, it’s comparable to the old Soviet labor camps.

One prisoner, Vladimir Gladkov, has his own story to tell. He said while spending time in the Kopeisk prison in the Ural Mountains, guards would “beat us with batons until we had to help drag each other back to our cells.” In May 2008, four inmates were killed at Kopeisk, too, which sparked national outrage.