January is supposed to be a time for starting over: for wiping the slate clean and for committing to reinventing or bettering ourselves. That’s why every year, we make resolutions to eat better, lose weight, and get healthier.

It lasts — with the best of intentions and heaps of conviction — for a couple of weeks. Then kale salads start losing their appeal. We start craving mounds of carbs and cheese. We start dreaming about the best of our childhood comfort foods. Little by little, our resolve to stay healthy wanes until we can’t take it anymore and we dive headfirst into a whole cake, pint of ice cream, super-size french fry, or half a lasagna. And even though we tried so hard, all that work and dedication go down the drain, not to be seen again until the start of bathing suit season.

This year, rather than beat your head against tremendous changes to your diet, try lightening the food you actually like to eat. Throw some kale salads in every now and then and make some chia seed smoothies for breakfast, sure, but realize that you’re only human. You’re going to need to make small changes if you’re ever going to make a big one.

Macaroni and cheese starts with cooking flour and butter, adding milk, and melting a bunch of cheese. Then you pour it over pasta, top that with buttered bread crumbs, and shovel it into your mouth. It’s serious comfort food. It’s also seriously packed with calories and fat.

This version from Eating Well, on the other hand, makes a couple of substitutions without sacrificing flavor. It cuts down on the full-fat melting cheeses by subbing in some low-fat cottage cheese alongside reduced amounts of cheddar, not only cutting calories but also increasing creaminess.

Eating Well adds a layer of spinach that makes it a cheesy spinach dip hybrid. To top it off, mac and cheese is a great vehicle for whole wheat pasta.

Sometimes you just need a handful of french fries. That’s OK. Potatoes, though a carbohydrate, are not devoid of nutrition. In fact, you can actually survive solely off potatoes, though you would need to eat seven pounds per day. The thing about french fries, though, is that in order to make them really good, you need to cook them in a large tub of fat.

French fries can be really delicious when made in the oven and with just two tablespoons of oil. To get them really soft on the inside and crisp on the outside, start by baking them under a sheet of foil for 5-7 minutes before finishing them off without the foil. This recipe from Ellie Krieger of the Food Network has 280 calories and 7 grams of fat per serving, whereas the same amount of fries from Burger King boasts 387 calories and 20 grams of fat. There is a lesser of two evils here, and it’s pretty tasty. 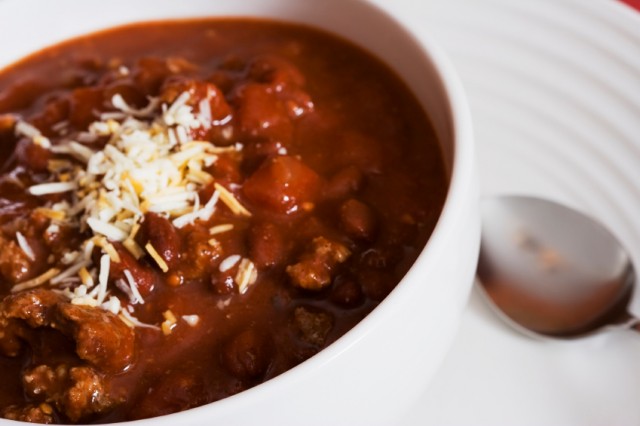 3. Chili with chipotle and chocolate

Chili, often made with beef and dripping with grease, can be very comforting and very fatty. This recipe from Cooking Light substitutes ground turkey breast and fat-free, reduced-sodium chicken broth.

Just don’t smother your bowl in cheese and sour cream, or you’ll undo all your hard work.

Normally, chicken pot pie gets a lot of its calories from the creamy, butter, schmaltzy velouté sauce that envelops the filling. It’s the best part, right? Yeah, we think so too.

To make the dish more healthy, choose a whole wheat topping. If you top your chicken pot pie with biscuits, use whole wheat flour and nonfat buttermilk. If you seal it in with a pie crust, mix it up with whole wheat flour. You could even get really crazy and use coconut oil instead of butter. And don’t forget to stuff the pot pie full of veggies!

I’m about to blow your mind.

You can make Alfredo sauce out of a vegetable ,and it will taste just like the real thing. I swear.

Lindsay at Pinch of Yum rocked my world when I first made her cauliflower Alfredo sauce. It’s creamy and delicious, and it’s made of vegetables instead of cream, butter, and cheese.

Here’s what you do: chop up a head of cauliflower and boil it for 20 minutes. Toss a couple of cloves of garlic in at the end to blanch them and remove some of their bitterness. Drain and puree the cauliflower and garlic cloves in a food processor or blender with vegetable stock and starchy pasta water right from your pasta pot. Add a pinch of nutmeg, some fresh black pepper, and some salt. You can go all out and throw in 1/4 cup of heavy cream and 1 tablespoon of butter, or you can dial back and splash in a little whole milk. Toss with whole wheat noodles and eat it all. Only 286 calories and 4 grams of fat, including the noodles.

To compare, Emeril Lagasse’s Alfredo sauce recipe uses 6 tablespoons of butter, 1 cup of heavy cream, and 1 cup of Parmesan cheese. Just one serving of the sauce, forgetting the pasta, is 360 calories.

It’s serious football season, and there’s nothing quite like artichoke dip — except that you just made a resolution to eat better, which crosses out all conventional spinach and artichoke dip recipes. This recipe from the Food Network, though, uses low-fat mozzarella and cream cheese and really puts the vegetables front and center, making it less of a fondue and more of a spinach and artichoke dip. Serve it with baked chips or whole wheat pita points, and one serving only comes to 100 calories and 5 grams of fat. Not bad for Super Bowl Sunday.

Need more lightened-up snacks for the big game to help you stay your course? Try these baked mozzarella bites from Cooking Light instead of traditional deep-fried mozzarella sticks. They’re coated in Panko crumbs, leading to a much more exciting crust than normal, and only take 20 minutes from start to finish.

This recipe uses egg substitute, but you can certainly use real eggs. The recipe couldn’t be much easier, either. Chop string cheese into 1-inch segments, dip in egg, dredge in Panko, bake at 425 degrees Fahrenheit for three minutes, and serve with marinara — and it’s only 91 calories and 5 grams of fat per serving. A side order from Arby’s is 425 calories and 22 grams of fat.

One of the biggest problems with chicken-fried steak is that it’s breaded and deep fried. This southern classic is serious comfort food, but it’s also seriously inviting a heart attack. Rather than give it up entirely, try this recipe from Eating Well.

Instead of deep frying the steak, this recipe calls for pan frying and finishing it off in the oven. In the end, it only uses 2 tablespoons of oil and clocks in at less than a third of the fat of a normal chicken-fried steak. This is still not something your cardiologist wants you to eat every day, but it’s a great compromise.

We couldn’t get through a comfort-food-gone-light list without bringing in something with bacon. On top of the cream, potatoes, and butter in a normal clam chowder, there is also bacon fat. In this recipe from the Food Network, though, you use only enough bacon to season the potatoes and aromatics. Rather than heavy cream, this recipe calls for fat-free half-and-half. Suspicious of fat-free half-and-half? Use whole milk instead. When all you need is a steaming bowl of chowder, reach for this recipe instead of a pound of butter and bacon.

The pinnacle of comfort food in the form of a mound of pasta, cheese, and red sauce. It’s a labor of love, a frenzy of eating, and then it’s a few extra pounds that never come off. Worth it? Almost.

Instead, you could make Lindsay’s recipe for super easy skinny lasagna from Pinch of Yum. It even cooks in the crock pot, which means that you don’t have to do anything with it after you layer the noodles and set the slow cooker.

Lindsay used kale to atone for her holiday binge eating, but you could use any chopped veggie that strikes your fancy (or that lives in your fridge). As opposed to Stouffer’s lasagna at 690 calories, this skinny crockpot lasagna weighs in at 307 calories.