Celebrities and trendsetters have been talking up a storm about matcha tea lately, but science shows this is more than just a passing fad. Matcha is as nutritious as it is delicious, offering health benefits far more powerful than those of any other green tea variety.

Part of what makes matcha tea unique is the way we ingest it: Rather than steeping the leaves in hot water, matcha is ground into a fine powder, which is then mixed directly with hot water.

“You’re digesting the leaf, you’re getting all of the polyphenols and the health benefits of the tea,” David Segal, co-founder of DavidsTea, explained to Boston Magazine. This method of ingestion is particularly efficient when it comes to the all-encompassing health benefits of matcha’s antioxidants. Susan Reardon, a certified holistic health coach, notes that matcha contains six times as many antioxidants as goji berries and 60 times as many as spinach!

Fire up the kettle and read on for four specific health benefits that matcha and its antioxidants offer tea drinkers.

We already know that matcha green tea is rich in antioxidants, but it contains one antioxidant in particular that’s helping our bodies in a vital way: catechin. One of matcha’s most powerful catechins is a substance called called epigallocatechin gallate (EGCG), which is believed to be anti-carcinogenic in nature, writes the American Cancer Society.

Although all green teas contain EGCG in varying amounts, a 2011 study published in the Journal of Chromatography A concluded that matcha contains around 137 times more ECGC than the average green tea.

2. It gives you a jitter-free energy boost

Matcha tea contains caffeine, but only around 30 milligrams per cup, reports the Telegraph. Compared to 95 milligrams per cup of brewed coffee (based on U.S. Department of Agriculture data), replacing your mug of coffee with matcha will cut a significant chunk of caffeine out of your diet.

Never fear, coffee-swillers: Matcha won’t leave you feeling groggy, thanks to a substance called L-theanine, which slows the release of caffeine into the bloodstream. This results in a milder and longer-lasting energy boost to fuel your day, reports the Daily Mail.

While most green teas offer similarly positive effects, matcha’s higher concentration of nutritional elements such as EGCG make it your strongest ally in the fight against high cholesterol (along with a slew of associated health conditions). 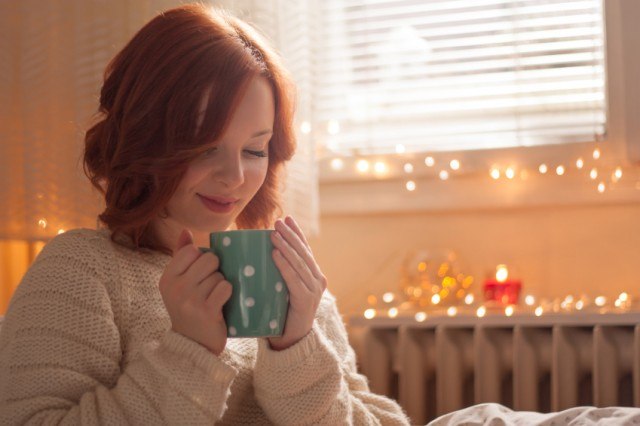 4. It has calming effects

Medium notes that this phenomenon is a result of a substantial increase in alpha brain waves, which studies have linked to enhanced levels of creativity, improved learning and concentration, and decreased anxiety levels.