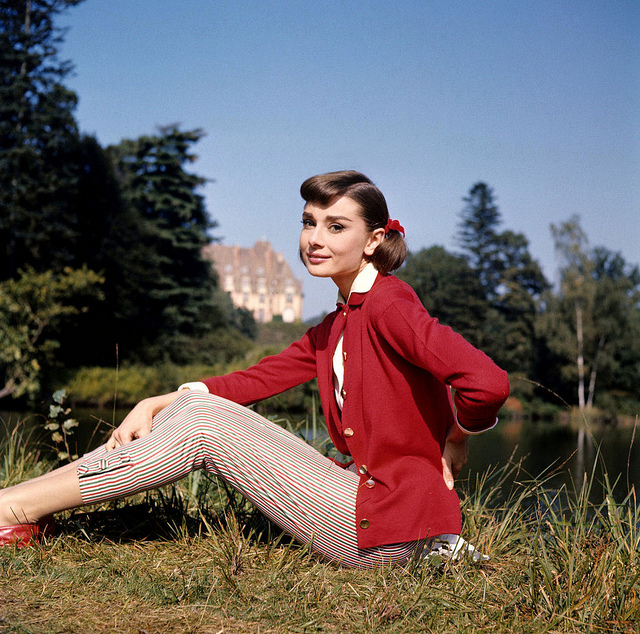 Born Audrey Kathleen Ruston in Belgium in 1929, Audrey Hepburn began her film career in 1948. Though she quickly became known for her iconic roles in Roman Holiday (1953), Sabrina (1954), Breakfast at Tiffany’s (1961), and My Fair Lady (1964), Hepburn has remained in the minds of many for not only her acting roles, but also her style.

Unlike many actresses in her era, Hepburn typically chose to forgo more overt sexuality in favor of chicness: Her hair was always perfectly coiffed, and she favored elegance over trendiness; choosing anything from couture by Givenchy (who considered Hepburn his muse) and ballet flats from Salvatore Ferragamo, which were developed especially for her.

In January 1963, Vogue‘s Cecil Beaton wrote, “What goes into the Audrey Hepburn mystique? When the star dust settles around her, it becomes clear to the nakedest eye that she [Hepburn] is deeply, intelligently knowledgeable about her looks.” Decades later, as Hepburn’s style remains influential and iconic, it’s clear that Beaton knew what he was talking about.

Read on as we break down some of Hepburn’s most influential looks and how you can find affordable alternatives.

One look Hepburn helped to popularize was the cropped pant. She wore them dressed up with a cashmere sweater and ballet flats, or slightly more dressed down when riding a bike. Skip the wide-leg crop and head for the style Hepburn was typically found in, which was a sleek cigarette pant that grazed the ankles. Affordable alternatives of this iteration can be found in several stores, and this slim cropped pant from Gap is one of our favorites for both its feel and price. Other affordable iterations of Hepburn’s black cigarette capri include this version from ASOS, and the mid-rise Lolita capri from LuckyBrand. 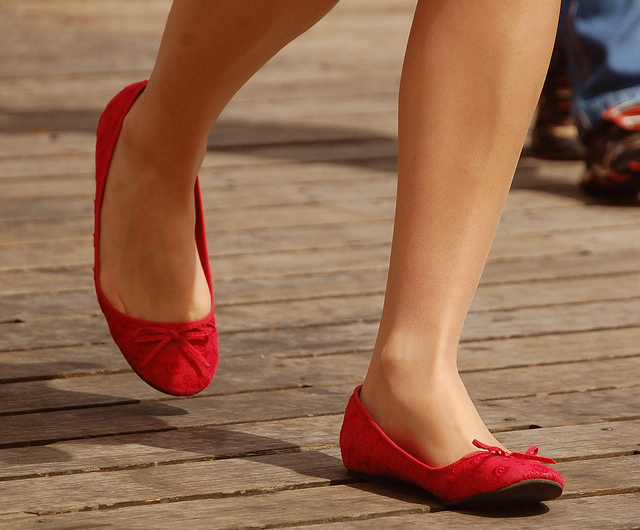 Though it was designer Salvatore Ferragamo who first developed the ballet flat specifically for Hepburn, the designer’s creations today tend to stray a bit from traditional styles that Hepburn was fond of. To model the actress’s look, go for flats that pair well with a tapered pant or tailored skirt. Invest in a pair that has dynamism and can be dressed up or down, such as this leather ballet flat from Repetto or this flexible flat from Banana Republic. 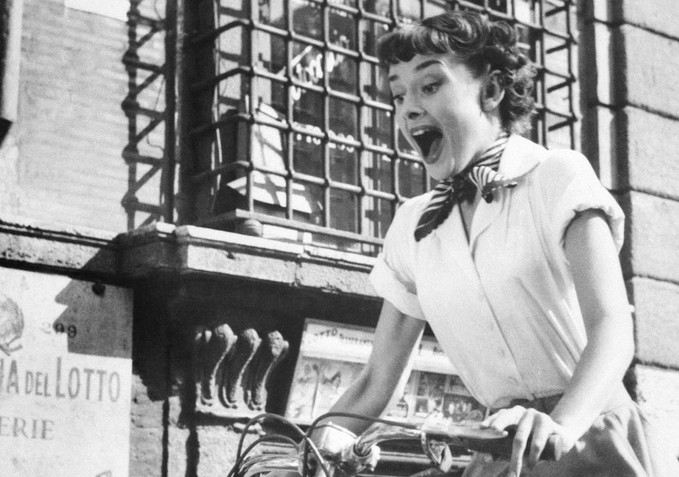 Hepburn was a fan of minimalism, and often wore outfits that were entirely monochromatic or offset these simple colors with a patterned piece. One such item she helped to popularize was a white shirt, with one of its most popular iterations seen in Roman Holiday, where Hepburn’s character pairs a button-down shirt with rolled sleeves with a circle skirt—a look she would later come to repeat often. Hepburn wore a white shirt often in a range of styles, including an oversized “boyfriend” look that she helped make popular in a 1956 photo by Jack Cardiff. For summer, we like this Bettie silk shirt, which is reminiscent of Hepburn’s Roman Holiday look in all the right ways. 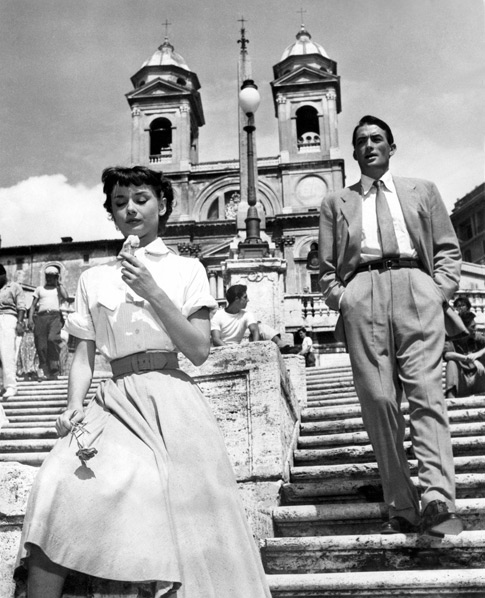 The circle skirt was considered a staple of mid-century femininity, so who better to help broaden its popularity than Hepburn? Completing her Roman Holiday look, Hepburn wore a circle skirt with a scarf and fitted white button-down. Because Hepburn was petite and had a tiny waist, this silhouette only helped her look more demure, with an effortless elegance. For warmer months, we like this light version from American Apparel or this alluring version from H&M. 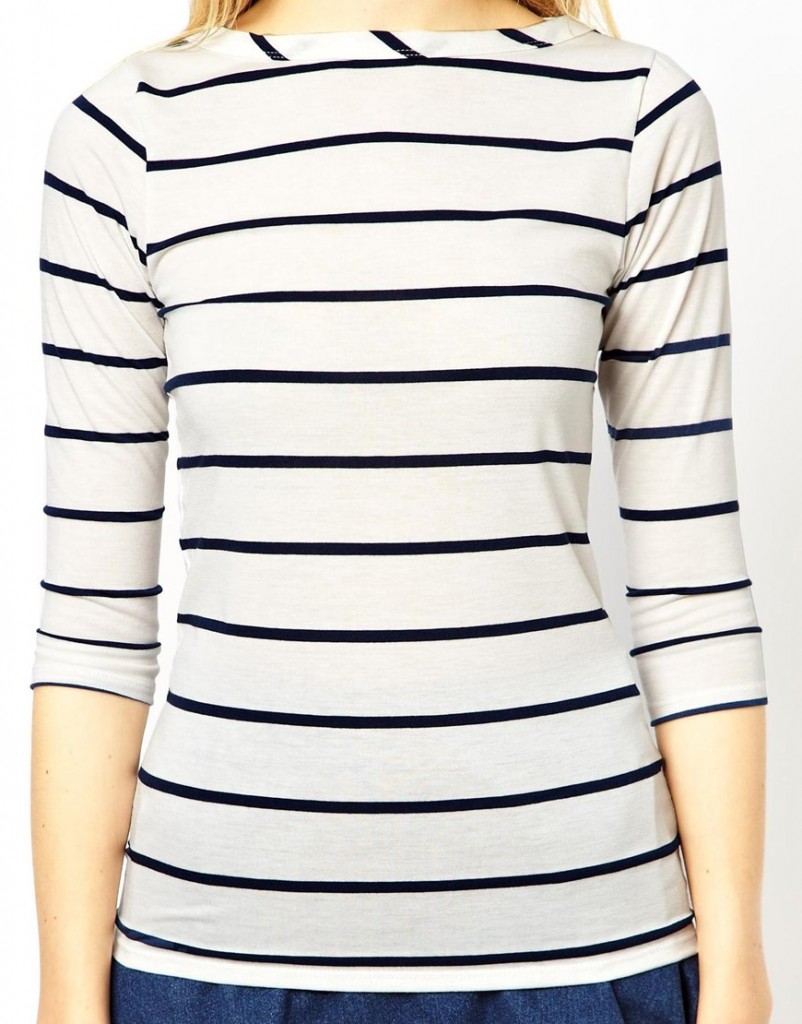 Coco Chanel introduced the Breton striped shirt in her 1917 nautical collection, and Hepburn can initially be seen wearing such a top in her 1956 film Funny Face. The Breton stripes were later called a “Hepburn Hallmark,” and stripes seemed to be a constant in Hepburn’s life, both in earlier and later years. To channel Hepburn on a cool summer night, pair a loose, comfortable striped shirt with dark denim and flats, or find one that’s a slimmer fit and pair it with a skirt.