Breakfast can be a delicious meal, but it’s often an afterthought. When you do have time to throw something together, oatmeal makes a great choice. The creamy texture takes on just about any flavor, and it’s filled with fiber and minerals that are great for your body. What starts out as a bowl of the grain here and there can easily turn into an everyday habit that leaves you longing for something different. Thankfully, plenty of other healthy grains take equally well to the morning meal. When you’re ready for a change without eliminating the warming comfort of porridge, turn to one of these 5 alternatives to rejuvenate your breakfast. 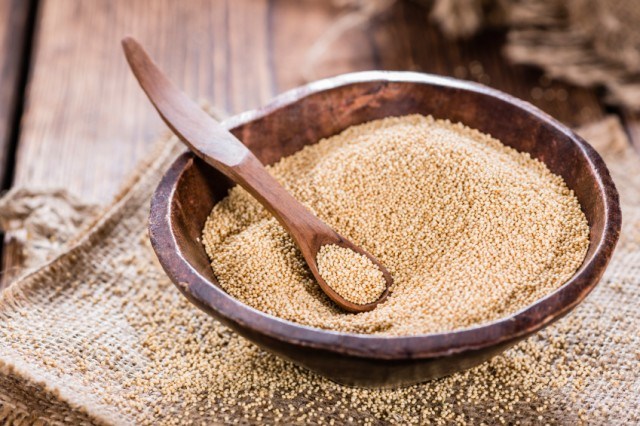 You’d never know from this dreamy treat topped with juicy blueberries that Phoebe Lapine doesn’t particularly care for porridge. Luckily for the rest of us, she has a number of warm cereal fans in her life. Lapine says, “my dad is the oatmeal king.” Since neither she nor her mother ever ate much of the grain, she says her father has always enjoyed treating house guests to his favorite breakfast.

As a chef, Lapine develops a lot of recipes for various clients. She says one of them particularly loves her blueberry oatmeal, so this amaranth version is a fun twist. Leftover amaranth can be used in a number of different ways. Lapine says the small size “makes for a nice, crunchy coating for chicken or fish.” This morning meal might be our favorite, though.

Visit Feed Me Phoebe for the recipe.

Like many children, Liren Baker fell in love with her grandmother’s cooking at a young age. Especially her oatmeal. She says her grandma’s “oatmeal was the only kind I liked. She made it just right.” While Baker’s love for warming breakfasts has continued, she likes to change things up now and again.

Through plenty of experimentation, Baker discovered that she prefers a different grain these days. “I have found that I love farro,” she says. Why the preference? Farro maintains a hearty chew, while still satisfying a craving for something creamy. A little bit of maple and cinnamon makes this breakfast bowl a sweet treat you’ll love.

Visit Kitchen Confidante for the recipe.

An Italian staple, polenta makes a wonderful accompaniment to tons of meals. It’s great grilled, or as a creamy side flecked with Parmesan cheese. Joy Wilson thinks it also makes a pretty stellar breakfast. She likes to cook up this treat on the first day of the week to lift her spirits. After a bowl of this delicious porridge, Wilson says, “the ugly Monday morning isn’t as nasty a beast as I thought.”

While polenta is easy to find in the regular grocery store, it can be overwhelming when you realize just how many options there are. “I love the fine grain texture because it cooks up faster and I love the texture for breakfast food,” Wilson says. If you prefer something with a little more body, go for a coarser grind. But keep in mind that it’ll take longer to cook.

Everyone’s favorite superfood works just as well in the a.m as it does for lunch and dinner. Kimi Harris decided to sub quinoa in place of oats for this recipe to help her gluten-sensitive family enjoy the comforts of breakfast porridge. Since oats are frequently processed on the same equipment used for wheat, they can sometimes be contaminated. Harris’ results were a resounding success. “Topped with currants, nuts, or berries, this hot cereal makes a great start to the day,” she says.

Those bored with the regular breakfast flavors will really appreciate this dish. It’s full of coconut milk and cardamom, giving you a little taste of the exotic. And feel free to adapt the recipe to your tastes. “I am sure that homemade almond milk would be substitution for the coconut milk,” Harris says.

Visit The Nourishing Gourmet for the recipe.

Bananas and breakfast just go together. When you’ve had your fill of bread, waffles, and pancakes, give Ella Woodward’s buckwheat porridge a shot. It’s loaded with a surprising amount of flavor, thanks to a trick Woodward discovered over the years. Woodward says the secret is “adding all the delicious ingredients at the beginning so that, as the buckwheat grouts cook and expand, they absorb all of the amazing flavors.”

Though Woodward developed this porridge as a way to combat the cold during the winter months, it makes a great meal any time of year. Top it off with whatever fruit is in season, and you’re sure to have a great morning.

Visit Deliciously Ella for the Recipe.