Happy Pi(e) Day! Every year, the ratio of the circumference of a circle to its diameter (approximately 3.14159) is celebrated on the date that comes closest to matching the approximation, March 14. In 2009, the U.S. Congress passed a resolution recognizing Pi Day, with the hope that celebrating would encourage school children to become interested in math and science. One popular way of celebrating this mathematical day is to enjoy a nice slice of pie.

The history of pie making dates back to the Egyptians, Romans, and Greeks, according to the American Pie Council. The “pye” as it was known then, came to America with the English colonists. The original American pies were baked in narrow pans called “coffins.” The crust (possibly the best part!) was not eaten in colonial days, but rather it served the purpose of holding the ingredients as the filling baked. Over the years, pie developed cultural ties strong enough to inspire the phrase, “As American as apple pie.” In honor of Pi, Americana, and the history of pie, here are six all-American pies to gobble up today.

From George Washington and the cherry tree to the National Cherry Festival held every year in Traverse City, Michigan, the U.S. has strong associations with cherries. King Arthur Flour invokes these ties to Americana with its recipe for presidential cherry pie.

Directions: Preheat oven to 425 degrees Fahrenheit. Divide the dough in half, and roll one half into a 13-inch circle. Transfer the circle to a 9-inch pie pan. Drain the cans of cherries, reserving ⅔ cup of water from one of them. Place the cherries and reserved liquid in a large mixing bowl.

Combine the sugar, cinnamon, and tapioca (or filling enhancer). Stir this into the cherries until everything is evenly combined. Stir in the almond extract and salt. If you’re using tapioca, let the filling sit for 20 minutes before using it to fill the pie shell.

Spoon the filling into the pastry-lined pan, and dot with butter, if desired. Roll out the second crust and place it on top of the filling. Cut a design into the top to vent steam, and squeeze/seal the top and bottom crusts together, fluting with your fingers or a fork. You may also choose to make a woven lattice crust.

Place the pie on a parchment-lined (to catch any spills) baking sheet, and bake in a preheated oven for 40 to 45 minutes, until the crust is golden brown and the fruit is bubbling. Remove the pie from the oven, and cool it on a rack before slicing, so the filling can set.

When it comes to shoofly pie, everyone agrees it owes its origin to the Pennsylvania Dutch. However, there is less agreement on how you make it. The debates are over the ingredients and preparation. It can be made with or without chocolate icing or spices. What’s Cooking America explains that the biggest discussion is over the crust; it can be a “dry bottom” or a “wet bottom.” To try the “wet bottom” version, make this recipe from Bon Appétit.

Directions: For the crust, (makes two pie shells; you need one for this recipe) mix dry ingredients. With your hands, cut the shortening into dry ingredients until crumbles the size of peas appear.

Beat the egg with a fork and add it to a bowl with water and vinegar. Add wet ingredients to dry ingredients and mix with your hands until all the ingredients are incorporated together. Split dough in half. Using a rolling pin and flour, roll out each half so it’s 10 inches in diameter. Try to work it as little as possible as it will toughen. Refrigerate until ready to use. Can stay in fridge up to 2 weeks.

For the filling mix together first three ingredients until shortening is integrated. Reserve 1/2 cup of mixture. Add molasses, egg, and baking soda and mix to blend. Then add water and mix, scraping the sides and bottom of the bowl to make sure everything gets incorporated.

To bake, preheat oven to 375 degrees. Lift dough into the pan and pat it down, making sure to secure into the pie pan edges but treating it gently all the same. With clean scissors or your hands, remove excess dough from the edges. Pour in the filling. Scatter reserved flour/sugar/shortening mixture evenly atop pie.

Bake for 18 minutes, then lower temperature to 350 degrees and bake another 18 to 20 minutes until the crust is golden and center of pie is only a bit wobbly. Cool in pie pan on a rack before serving. Serve with vanilla ice cream or a dollop of whipped cream.

Your tastebuds will be singing “My Old Kentucky Home” after sampling this pie, just don’t use the “Derby” namesake, which is copyrighted. Derby pie was created at the Melrose Inn in Kentucky and is a popular item at the Kentucky Derby, and Kern’s Kitchen owns the trademark. But you can still make your very own pie, thanks to Brown Eyed Baker.

Directions: Prepare the pie crust as directed in your recipe; blind bake according to the recipe’s instructions; set aside. Adjust the oven temperature to 350 degrees Fahrenheit.

In the bowl of an electric mixer on medium-high speed with a whisk attachment (or in a large bowl with a whisk and a lot of elbow grease), whip together the butter, sugars, corn syrup, eggs, bourbon and vanilla extract until frothy. Fold in the walnuts and chocolate chips with a rubber spatula.

Pour into the prepared pie crust (you may have more filling than will fit into your pie pan — just fill it up as far as you can). Bake for 50 to 60 minutes or until set. Cool completely at room temperature (at least 4 hours) before slicing into the pie. Serve with ice cream or whipped cream.

Country Living provided a recipe for Mississippi Mud Pie straight from Indianola, Mississippi, is the Crown Restaurant‘s delicious version of mud pie. The name for this chocolate-filled pie was inspired by the mud on the banks of the Mississippi river.

Directions: Preheat oven to 450 degrees Fahrenheit. Line crust with parchment paper and weight with dried beans or pie weights; bake until dough is lightly golden and set, 10 to 15 minutes. Remove pie and cool on a wire rack. Reduce oven temperature to 350 degrees Fahrenheit.

For filling: In a bowl, stir together butter, sugar, and cocoa until well combined. Add flour, eggs, and vanilla and mix until smooth. Pour mixture into prepared crust and bake for 30 to 40 minutes. Remove pie from oven and cool completely on a wire rack. Gently mound ice cream over pie and freeze until ice cream sets. Drizzle with fudge sauce before serving.

Nothing says Key West, Florida like Key limes. The limes are ubiquitous in that region of the country, as the Key Lime Pie Festival points out, it flavors everything from soaps to soups. Get a little taste of the islands from this recipe on Epicurious, which originally came from Gourmet.

Directions: To make the crust, preheat an oven to 350 degrees Fahrenheit. Stir together graham cracker crumbs, sugar, and butter in a bowl with a fork until combined well, then press mixture evenly onto bottom and up side of a 9-inch (4-cup) glass pie plate. Bake crust in middle of oven 10 minutes and cool in pie plate on a rack. Leave oven on.

For the filling, whisk together condensed milk and yolks in a bowl until combined well. Add juice and whisk until combined well (mixture will thicken slightly). Pour filling into crust and bake in middle of oven for 15 minutes. Cool pie completely on rack (filling will set as it cools), then chill, covered, at least 8 hours.

Just before serving, beat cream in a bowl with an electric mixer until it just holds stiff peaks. Serve pie topped with cream. 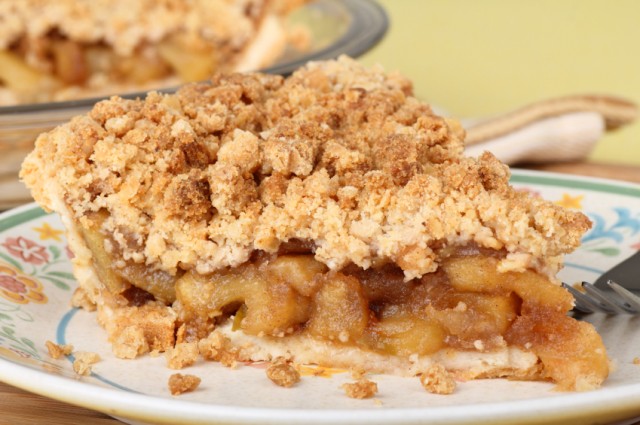 By the American Pie Council’s count, there are 231 variations of apple pie. Everyone has a favorite way to bake theirs, making it not only an American tradition, but one you share with friends and family. One take on the ultimate American classic that adds another texture is Paula Deen’s crunch top apple pie.

Directions: Preheat oven to 425 degrees Fahrenheit. Line a 9-inch pie pan with half of dough. Combine sugar, flour, cinnamon, and salt in a bowl. Stir in apples, applesauce, and lemon juice. Spoon apple mixture into pie pan and dot with butter. Cut remaining crust into strips; arrange in a lattice design over top of pie.

For crunch topping, combine flour, sugar, and salt in a bowl. Using a fork, cut in butter until mixture is crumbly. Sprinkle over top of crust. Bake for 10 minutes, then reduce heat to 350 degrees F and continue to bake for about 45 minutes, or until crust and topping are golden brown.