French Toast Crunch cereal will be welcomed back to the market in 2015 after an 8-year hiatus, reports General Mills. Cereal enthusiasts need no longer resort to overpriced boxes of this snack on eBay, as nationwide distribution is set to roll out as early as January.

This announcement comes hot on the heels of lemon-lime Surge soda’s triumphant return to the market in September. The Washington Post notes the Coca-Cola beverage sold out at least three times on Amazon in its first week back. In view of this, such revivals are hardly surprising from a marketing standpoint. A study in The Journal of Consumer Research suggests that feelings of nostalgia have been proven to encourage greater spending among consumers

Unfortunately, not all of our favorite discontinued treats have made a comeback — yet, that is. Here are 6 products from our childhoods that we wouldn’t mind seeing hit the shelves again.

Bill Cosby used to tout these sweet treats on TV and in print in the 1980s and 1990s, reports Today — but the creamy pops vanished in the early ’90s without a trace. The concept of a “pudding pop” doesn’t belong exclusively to Jell-O, so imitations are still in production. Devoted Pudding Pop patrons continue to battle for a revival of their favorite frozen fare by campaigning on social media (one Facebook group, “Bring Back Jell-O Pudding Pops,” has 2,666 members and counting!).

Releasing the ever-popular Oreo cookie in cereal form seemed like a foolproof idea upon this cereal’s launch in 1998. Unfortunately, Post Foods was forced to shut down Oreo-Os operations in 2007, when the company ceased co-branding with Kraft. All is not lost, however: The cereal is still manufactured in South Korea, reports Serious Eats, and true devotees can order boxes online. Of course, this comes at a cost — but that taste of your childhood is nothing short of priceless.

These bite-sized Butterfinger snacks are perhaps most memorable for their commercials, which featured our favorite characters from The Simpsons. Butterfinger BB’s peaked in popularity in the mid-1990s, reports Complex, but were officially discontinued by Nestle in 2006. Online search results turn up hundreds of forlorn BB-lovers looking for answers, only to find nothing, as Nestle has yet to break its silence on the issue. Sadly, our dreams of seeing this candy revisited doesn’t seem too likely.

This Betty Crocker product was aptly named — it’s not quite a candy, not quite a snack — simply a “thing.” The sweet treat was delicious and fruity in the best — and most artificial — way possible. The gummy snacks were a hit among children, Complex reports, and a consistent lunchbox favorite throughout the 1990s. 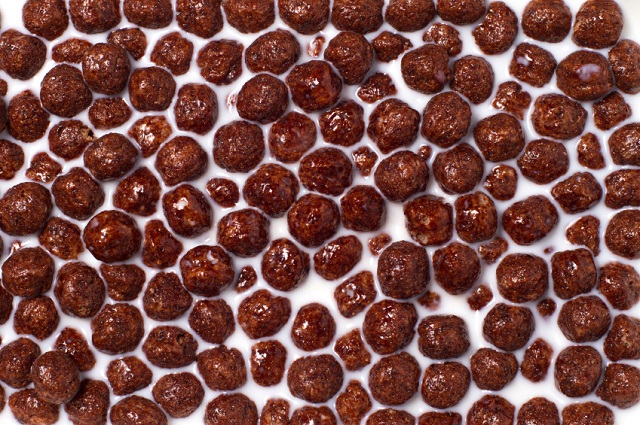 Nesquik Cereal, manufactured by Nestle, was a popular chocolatey cereal that competed for sales against General Mills’s Cocoa Puffs, the main difference being that Nesquik Cereal had smaller chocolate morsels than its General Mills counterpart. The cereal can still be tracked down by hardcore Nestle-lovers: Production continues in 43 countries around the world, the company says.

The Ecto-Cooler flavor of Hi-C fruit juice was originally released in 1986 as a tie-in with the Ghostbusters franchise, according to Retro Junk. Complex reports that the flavor — which tasted of lime and citrus — hit the height of its popularity in the late 1980s. Amazingly, the flavor lasted through 2001, when it was modified to “Shoutin’ Orange Tangergreen,” then “Crazy Citrus Cooler,” according to Nerdist. Unfortunately, the drink didn’t make it past 2007 — but the Ghostbusters Chicago Division claims that their recipe best matches the original flavors of the drink. Give it a try for yourself!