Indulgent Desserts That Are Surprisingly Nutritious

Delicious as it may be, dessert is typically no friend to your waistline. Those layers of luscious chocolate, decadent caramel, and rich fudgy flavors come with a price: They are chock-full of fat, calories, and unhealthy ingredients. There’s a good chance you are already aware of that fact, but the truth is, some days when a sugar craving attacks, it doesn’t matter that you know you’re about to eat something detrimental to your diet — you just want something sweet, and you want it now. Fortunately, there’s a way for you to silence your sweet tooth without consuming a days worth of calories in one sitting. Bake one of these 6 desserts, which taste unbelievably indulgent but are surprisingly healthy. Finally, you can enjoy a slice of cake and stick to your diet, too. 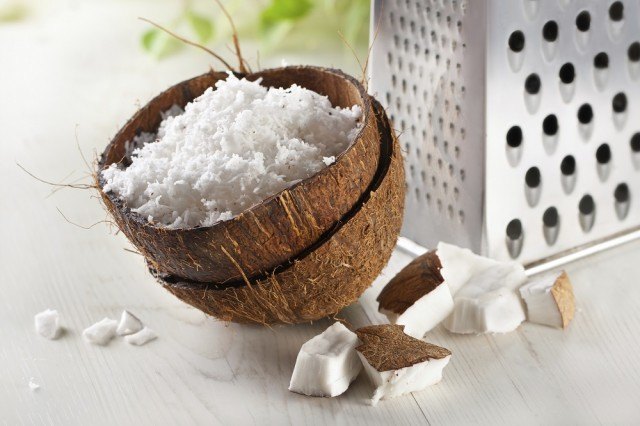 Drop that Mounds bar! It may cure your cravings, but at 240 calories, 13 grams of fat, and 10 grams of sugar, this is not a diet-friendly option. Instead, make One Green Planet’s Mounds bar fudge, a heavenly treat that is healthy, dairy-free, and vegan. Consisting of food-for-you ingredients such as shredded coconut, coconut flour, and almond milk, one piece contains 4.5 calories and 0.3 grams of fat. It doesn’t get any sweeter than that! The recipe makes 10 to 15 pieces.

Directions: Mix together unsweetened shredded coconut and coconut flour. Add in milk and stir until combined and uniform. Add in mashed banana, pumpkin, or applesauce, cocoa powder, and sweetener to taste and mix until incorporated. Spread it into a container and freeze until solid. 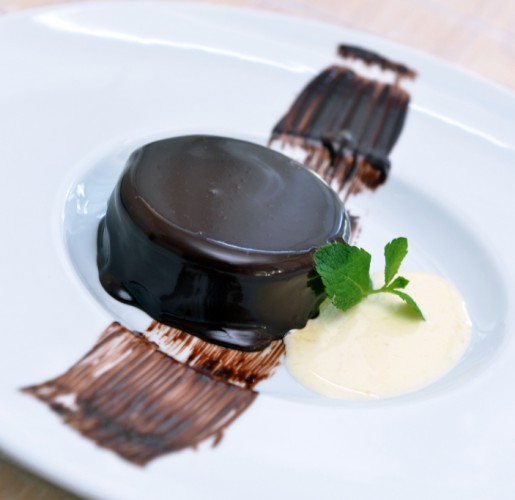 Silky and sweet, Food & Wine’s panna cotta is a light chocolaty custard, which pairs perfectly with spiced pepita brittle. The best part? Brittle is surprisingly easy to make: Heat the sugar and water on the stove, swirl in butter and spiced pepitas, and let cool. The recipe yields 6 servings. If you’ve never roasted pumpkin seeds before, Fine Cooking shows you how to make your own here.

Directions: In a small bowl, sprinkle the powdered gelatin over ¼ cup of the milk and let stand until the gelatin is softened, about 5 minutes. In a medium saucepan, combine the remaining 2½ cups of milk with 2 tablespoons of the sugar and the salt and bring just to a simmer over moderately heat. Remove the milk from the heat and whisk in the softened gelatin until dissolved.

Meanwhile, line a baking sheet with a silicone mat or lightly oiled parchment paper. In a small bowl, toss the pepitas with the cinnamon and nutmeg. In a medium saucepan, combine the remaining ¾ cup of sugar with ⅓ cup of water and cook over high heat, swirling the pan gently, until a medium amber caramel forms, about 6 minutes. Remove from the heat and swirl in the butter and spiced pepitas. Pour the brittle onto the prepared baking sheet and spread it in a very thin layer. Let cool completely, about 20 minutes, then crack it into shards. Run a knife around the panna cottas and invert onto plates. Garnish with the pepita shards and serve. 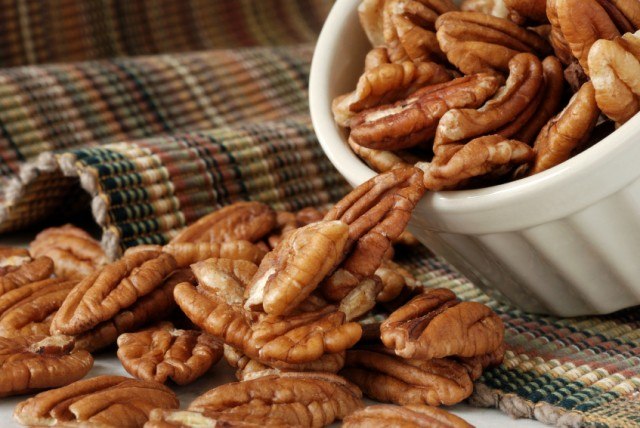 Filled with sticky sweet flavors, PopSugar’s gooey apple pecan bars will give you a taste of Thanksgiving year-round. You will find no refined sugar in this dessert; instead, the recipe relies on several ingredients, such as honey and dates, to sweeten the bars naturally. Great for vegan and Paleo eaters, one serving has 330 calories, 26.5 grams of fat, and 17.3 grams of sugar.

Directions: Place all the crust ingredients in a food processor until they are finely chopped and well combined. Transfer the mixture to an 8-by-8-inch baking pan and press so that it is evenly distributed. Chill the crust in the refrigerator while you prepare the apple topping. Place a small skillet over medium-low heat. Add the whole pecans, and toast until aromatic, about 8 minutes. Roughly chop the pecans, then set aside.

Place a large skillet over medium heat. Add the coconut oil followed by the sliced apples, 1 teaspoon cinnamon, and pinch of salt. Cook just until the apples become flexible, about 4 minutes, stirring frequently. Allow the apples to cool enough so you can handle them. Arrange the apple slices on top of the refrigerated crust, then sprinkle the chopped pecans over the apples, then drizzle with the reduced apple liquid. Refrigerate the bars until they become firm, about 8 hours. Cut into 12 bars, then serve.

At 140 calories per serving, Better Homes and Gardens’ dark chocolate souffle is a light option to reach for when you need a chocolate fix. Notes of espresso complement the cocoa wonderfully, while providing you with a welcome caffeinated pick-me-up. WebMD notes that cocoa is bursting with health benefits; eating it will lower your blood pressure, improve your blood vessel health, and decrease your LDL (bad) cholesterol. A heart-healthy dessert that tastes sinfully indulgent? We suggest making this recipe stat!

Directions: Preheat oven to 350 degrees Fahrenheit. Lightly coat eight 4- to 6-ounce ramekins with nonstick cooking spray. In a small bowl stir together the 2 tablespoons granulated sugar and the espresso powder. Sprinkle on the side and bottom of each dish. Place in a shallow baking pan; set aside.

Bake in a 350 degrees oven about 25 minutes or until a knife inserted near centers comes out clean. If desired, sprinkle with powdered sugar. Serve immediately.

This Rawsome Vegan Life’s ice cream cake is just as nutritious as it is delicious. Hemp and flax seeds, cacao, and dates make the crust, while bananas, dates, cashews, coconut oil, cacao, nut butter, and chocolate sauce create a fabulously rich and creamy filling. The recipe developer used peanut butter when creating this cake, but feel free to use your favorite nut butter in its place; no matter which you decide to use, it’s guaranteed to taste terrific!

Directions: To make the crust, pulse the hemp and flax seeds and cacao in your food processor until they become a rough flour, then add the dates and process until it all gets sticky. Press into the bottom and up the sides of a spring form pan. Put in the fridge.

To make the filling, blend all the ingredients until smooth, adding water or vegan milk as needed to make it creamy. Spread evenly into your crust, occasionally swirling in nut butter and chocolate sauce if you’re using them. Put in the freezer overnight or until frozen solid, and let it thaw a little bit before serving, so it’s nice and creamy. 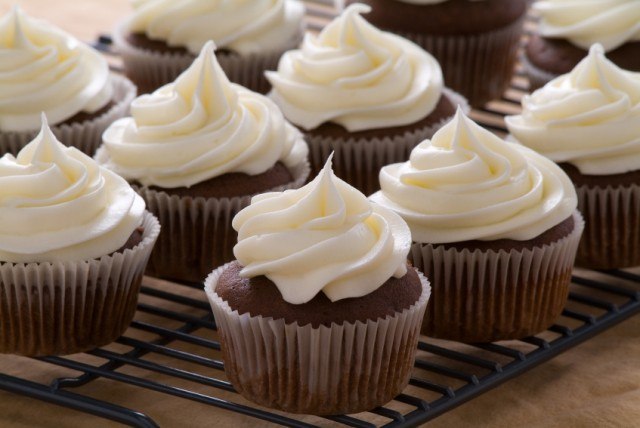 Another divine chocolate dessert makes the list, this time in cupcake form. A creamy vanilla frosting contrasts the chocolate wonderfully, while coffee granules help intensify the dessert’s richness. For thicker frosting, Cooking Light suggests covering and chilling it for 10 minutes before spreading on the cupcakes. The recipe yields 16 servings; each contains 203 calories and 6.8 grams of fat.

Directions: Preheat oven to 350 degrees Fahrenheit. To prepare cupcakes, place the first 4 ingredients in a large bowl; beat with a mixer at medium speed until well blended. Lightly spoon flour into dry measuring cups; level with a knife. Combine flour and next 5 ingredients, stirring well with a whisk. Stir flour mixture into sugar mixture alternately with buttermilk, beginning and ending with flour mixture; mix after each addition just until blended.

Place 16 paper muffin cup liners in muffin cups; spoon about 2½ tablespoons batter into each cup. Bake at 350 degrees for 18 minutes or until a wooden pick inserted in center of a cupcake comes out with moist crumbs attached. Remove cupcakes from pans; cool on a wire rack.

To prepare frosting, combine powdered sugar and remaining ingredients in a medium bowl. Beat with a mixer at medium speed until combined. Increase speed to medium-high, and beat until smooth. Spread about 1 tablespoon frosting on top of each cupcake.