The Mayflower, Paul Revere, and the Boston Tea Party may be the first things that come to mind when you consider New England’s role in American history. Beyond its political influence, however, this region is also where some of our country’s strongest food-related traditions took hold. For hundreds of years, residents have been using flavors fresh from farm and sea to cook and bake up some of America’s most beloved dishes. Savory, sweet, and earthy tastes help to make these treats just as popular today as they were among the nation’s earliest settlers.

Try any of these six recipes to enjoy the authentic tastes of New England for yourself! 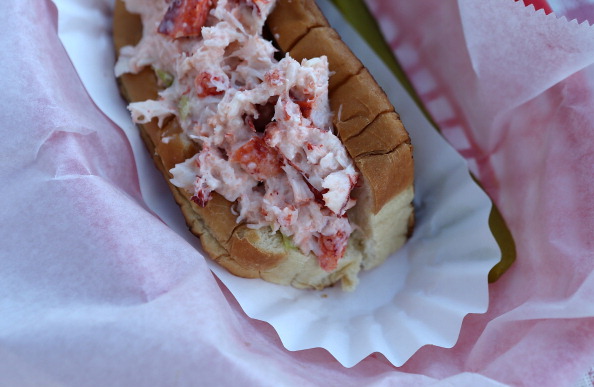 Nothing quite sums up the New England experience like sitting on a harborside picnic bench and indulging in a generously-stuffed lobster roll. The dish’s creamy filling of lobster meat, mayonnaise, and crispy chopped celery resting atop a toasted and thoroughly buttered roll will send you to heaven — or to Cape Cod, at the very least. Chow‘s recipe takes about an hour to complete and yields two lobster rolls. If you’re not feeling ambitious enough to cook up and extract the lobster meat on your own, you can purchase fresh chunks from any local market.

For the lobster salad:

Directions: Fill a large pot with 1 inch of water and stir in the measured salt. Add a steamer rack to the pot.

Bring the water to a boil over high heat. Add the lobster to the pot head-first, cover with a tightfitting lid, and return the water to a full boil. Reduce the heat and cook at a gentle boil until the lobster is bright red, about 14 minutes from the time it went into the pot. Check its doneness by pulling on an antenna: If the antenna comes out with no resistance, the lobster is done. Remove the lobster to a rimmed baking sheet and let it sit until it’s cool enough to handle.

Using your hands, twist and separate the tail from the body. Twist and remove both of the claws where they meet the lobster body; set the claws aside. Discard the head and torso. Starting with the tail, remove the small, wispy flippers on the underside of the shell. Using a fork, pierce the exposed tail meat and slowly twist and pull it out of the shell in one piece.

Add the celery and mayonnaise, season with salt and pepper, and stir to combine. Cover tightly with plastic wrap and refrigerate for at least 30 minutes and up to 6 hours.

To assemble: Spread the butter on the outside of the buns. Heat a medium frying pan over medium heat until hot, about 3 minutes. 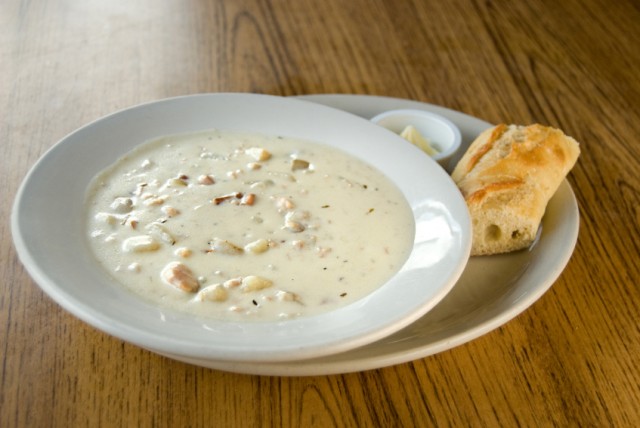 The prolific Cape Cod-based writer Joseph C. Lincoln once referred to New England Clam Chowder as “Yankee Doodle in a kettle” — in other words, this creamy stew is about as American as it gets. This type of buttery, cream-based chowder is not to be confused with Manhattan Clam Chowder, which relies on tomatoes for its own zesty take on clam stew. Food Network‘s recipe falls in line with the irresistibly comforting New England variation, taking an hour and a half to complete and yielding six to eight servings.

Ingredients: For the chowder: Heat the butter in a large pot over medium-high heat. Add the onion and celery and saute until softened, mixing often. Stir in the flour to distribute evenly. Add the stock, juice from 2 cans of chopped clams (reserve clams), cream, bay leaves, and potatoes and stir to combine. Bring to a simmer, stirring consistently (the mixture will thicken), then reduce the heat to medium-low and cook 20 minutes, stirring often, until the potatoes are nice and tender. Then add clams and season to taste with salt and pepper, cook until clams are just firm, another 2 minutes.

For the Pan Toasted Croutons: Melt the butter in a large skillet and toss the bread cubes in the butter until browned and toasted, about 2 to 3 minutes. Add parsley and season with salt and pepper.

There’s a reason why, to this day, they call Boston “Beantown”: According to Bostinno, the nickname derives from this port city’s staple baked bean dish — popularized as a result of the enormous exports of molasses that were known to leave its ports daily. Brown Eyed Baker‘s baked beans maintain that tradition with sweet molasses and brown sugar base, combined with apple cider vinegar for tartness and brown mustard to give the beans a final kick. Recipe yields four to six servings and takes 5 hours and 45 minutes. Be patient — slow-cooking the dish is your ticket to tantalizingly tender results!

Remove lid and continue to bake until liquid has thickened to syrupy consistency, 1 to 1 ½ hours longer. Remove beans from oven; stir in remaining tablespoon of molasses, vinegar, and additional salt and pepper to taste. Serve. 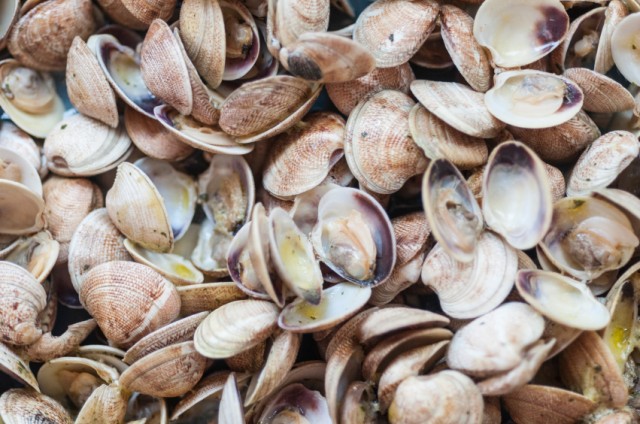 Slowly cooking this assortment of seafoods and potatoes together will result in a luscious, tender bake that can be served family-style at your next gathering. Buying fresh seafood will ensure the best possible results. Feel free to add veggies to this dish as per your liking — potatoes are the most common addition, though corn and celery are often tossed in as well for texture and flavor. Serve with French bread for dipping, and enjoy! All Recipes‘s dish takes 1 hour and 5 minutes to complete and yields four servings.

Directions: Place a potatoes in a layer in the bottom of a large pot. Cover with a layer of clams, then mussels, and finally the shrimp. Pour in the vermouth and enough chicken broth to fill the pot halfway. You may not need all of the broth, depending on the size of your pot. Cut a half cup of the butter into cubes and place on top of the seafood. Cover with a lid, and seal tightly with aluminum foil.

Bring to a boil, then simmer over medium-low heat for 45 minutes. Remove from the heat, and carefully remove the foil and lid. Remove the seafood and potatoes from the liquid and serve on a large platter, family-style.

Melt ½ cup of reserved butter, and divide into 4 individual dishes for dipping. Serve with French bread and remaining softened butter for the bread. 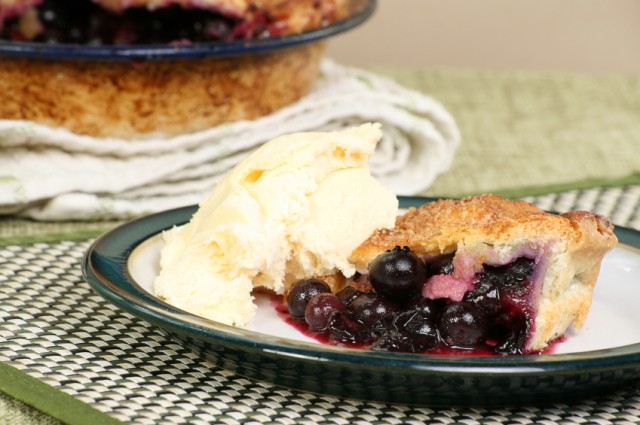 According to the National Agricultural Statistics Service, Maine harvested a whopping 91.1 million pounds of wild blueberries in 2012. It’s no wonder that New England started devoting some of that crop to making some of the nation’s best delicious blueberry pies! This long-lasting tradition combines freshly-rolled pie crust with a sweet and tart blueberry filling. The treat is best enjoyed with a tall, cold glass of milk or a scoop of pure vanilla ice cream. Yankee Magazine‘s recipe takes an hour to make and yields eight servings.

Directions: For crust: In a medium-size bowl, whisk together flour, sugar, and salt until well combined. Sprinkle butter over flour mixture, and use your fingers to work it into the mix. Stop when the mixture looks like cornmeal, with some pea-size bits of butter remaining.

Sprinkle 6 tablespoons ice water on top, and stir with a fork until dough begins to come together. If needed, add more ice water, a tablespoon at a time. Turn out onto a lightly floured surface and knead three times, or just enough to make a cohesive dough. Don’t overmix! Gather into a ball; then divide into two pieces, one slightly larger than the other. Press each piece into a disk and wrap in plastic. Refrigerate 30 minutes.

For pie: Wash berries, remove stems, and gently stir with flour and sugar. Sprinkle with lemon juice to taste. Set aside.

Preheat oven to 400 degrees Fahrenheit. Unwrap the larger disk of Double-Crust Pastry Dough and place in the center of a large sheet of parchment paper. Cover with a second piece of parchment. Roll out, working from center, to a 13-inch circle. Peel off top piece of parchment and transfer dough to a 9-inch deep-dish pie plate, peeled side down. Peel off remaining parchment and press crust into plate, draping any excess over the sides.

Unwrap smaller dough disk and place in the center of a large sheet of parchment paper. Cover with a second piece of parchment. Roll out, working from center, to an 11-inch circle. Set aside.

Pour berries into bottom crust. Distribute dots of butter over berries. Peel one sheet of parchment off top crust. Transfer top crust, peeled side down, to pie; then peel off remaining parchment.

Using a sharp knife, make three slashes in crust to let steam escape. Fold bottom crust up over top crust and crimp to seal. Brush with egg wash; then bake until crust is golden brown and juices are bubbling, 40-50 minutes. 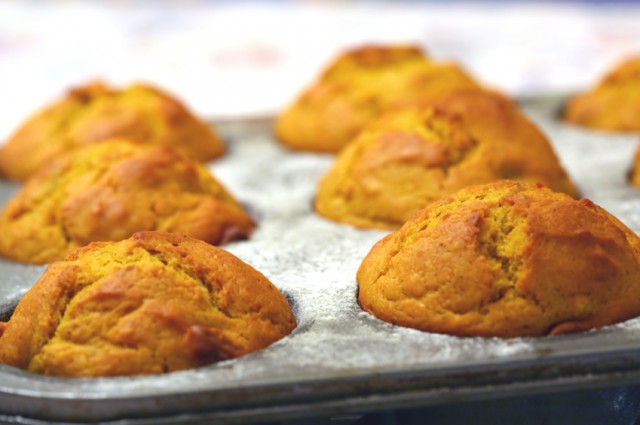 In the past year, the state of Vermont was responsible for 42 percent of the country’s maple syrup production, reports the National Agricultural Statistics Service — and with the approach of fall, it’s only proper that we combine the splendidly sweet flavors of maple with the hearty, organic taste of pumpkin. Try baking the ingredients together in Vermont Maple‘s recipe for warm, comforting maple-pumpkin muffins. These can be enjoyed with your morning coffee or as a quick last indulgence before falling asleep on a brisk autumn evening.

Combine flour, baking powder, baking soda, cinnamon and salt in a bowl. In a separate large bowl, combine pumpkin, maple syrup, oil, and egg and beat until evenly mixed. Add dry ingredients to the pumpkin mixture, incorporating with a spatula until just mixed.

Divide batter in prepared muffin tins and bake for 25 to 30 minutes, or until a toothpick inserted into a muffin comes out clean. Serve and enjoy!