Less is often more, and that is especially the case for trendy makeup this spring. When the models in the spring 2014 fashion shows flaunted designer clothing on the catwalks last fall, there was a noticeable absence of matte and makeup — just call it the “raw beauty” movement. At least, that’s what Proenza Schouler is doing.

Makeup artist Diane Kendal created the looks for the Proenza Schouler and Alexander Wang (pictured) shows, during which it was all about what wasn’t on display. ”This is raw beauty — a simple freshness, focusing on skincare, curled lashes and a groomed brow,” Kendal explained to the Los Angeles Times.

“Doing as little as possible but still looking good is the most modern thing that you can do right now,” hairstylist and creative consultant Guido Palau told Vogue.

So how do you go about crafting this less-is-more effect? Kendal told Elle to “apply makeup, then top with moisturizer and pat the face with a tissue.” A bit of bronzer pressed onto the cheeks will keep your face from looking mask-like. Bear in mind that when creating this style, the artists had in mind a look that used makeup without looking like someone used makeup. “The foundation is there to not be seen — and to create a perfect finish,” Tom Pecheux, Estée Lauder’s creative makeup director, said.

One step up from this is the introduction of soft colors. Cheeks were blossoming with pinks and peaches, and lips, too, had subtle hints of color. Refinery 29 noted rose gold in its makeup trends for spring 2014. 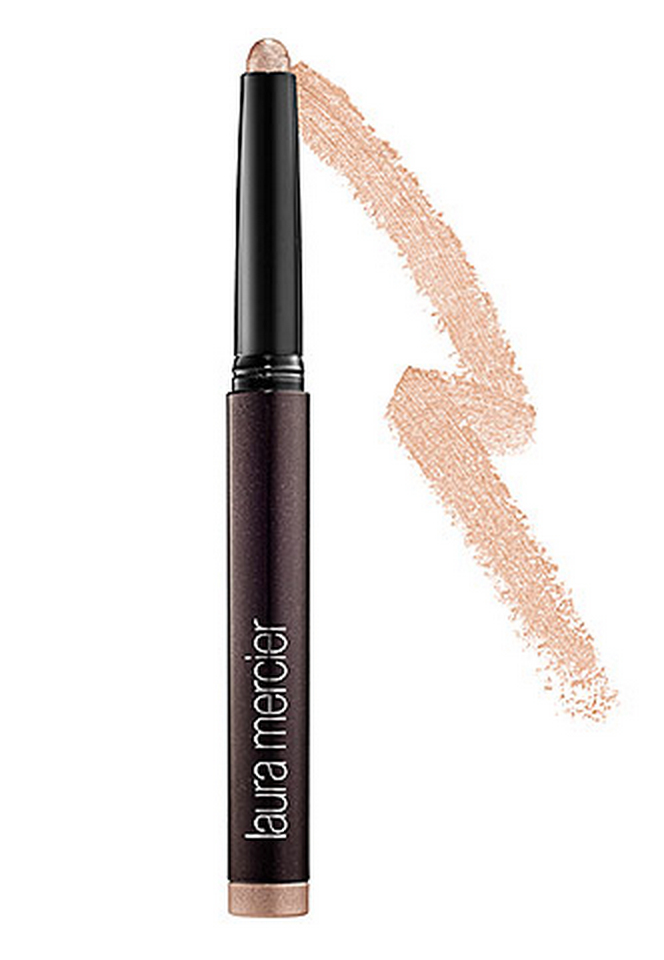 It is easy to see why: Rose gold (Laura Mercier’s caviar eyeliner in rosy gold shimmer is pictured) is soft and subtle but still has a wow factor due to its dusty, shimmery pigments. This color can be worn on the eyes, as a blush, or as a lip color. It is available in nail polishes and flatters a variety of skin tones. Rose gold also stays somewhat within the realm of a barely there makeup look.

For those not into rose gold, lilac was another trending color on the catwalk. It is one of the colors makeup retailer Sephora highlighted in its colorcast for the season. Commonly seen as eye shadow, luscious lilacs weren’t the only pastels sweeping from lash to brow. Harper’s Bazaar rounded up greens, pinks, and pale blues that also suitably shaded eyes this season.

As the pastels and rose golds were taking over the eyes, another trend was creeping in: catchy cat eyes. Lined with white, bright colors, or dramatically shaded, cat eyes were lurking around every catwalk corner. At Marc Jacobs, bold, dark lines were topped off with white for maximum contrast. Kate Spade went stylishly retro, influenced by mod looks.

To catch cat-eye fever, take a look at this Estée Lauder tutorial on a bold wing. Instead of a usual black or dark brown, blue was used for the liner. Again, this is spot-on for spring. Cobalt blue ruled the runways and provides another color option that breaks with the softer hues discussed so far. It also made Sephora’s seasonal color cast and topped Pantone’s list of women’s spring fashion colors.

Keeping with the bold theme, the only trend that could topple the nude makeup look in terms of dominance is orange lips. Coincidentally, orange lips pair perfectly with the nude look, because with such a strong statement being made by your mouth, playing down other features will work to your advantage.

Rag & Bone’s models (pictured) are a fantastic example of this. The backstage photos show women lacking blush, mascara, eyeliner, or shadow. Orange is also an incredibly accessible lip color. Revlon global artistic director Gucci Westman said to Elle that all skin tones can wear an orange pout. “If you have olive skin, it makes your skin more olive, and if you’re fair, it enhances the pallor,” Westman said.

To add a little extra, take the path chartered by Emma Watson. Style.com covered her orange-lipped red carpet look in March; although Watson did not eschew makeup entirely, she wasn’t overt in her other choices, either. Long black lashes and a bronzed glow are the only other aspects the actress amped up — and the look was a stunning success.

Other trends blend into each other, as well. The “Nectar and Nude” palettes at Bobbi Brown pull off a combination of understated oranges and rose golds. January Jones took a gamble with two eyeliners: a top lining of blue with gold underneath was her combination of choice at the premiere for the final season of Mad Men. It certainly was an unexpected pairing, as Glamour points out, but the intriguing duo works for Jones. While you may not be in love with the idea or willing to try it yourself, that shouldn’t stop you from mixing and matching your favorite makeup trends for a look that is uniquely your own.