6 Ways to Get a Workout While You Commute

Despite the long list of reasons to incorporate more physical activity into daily life, most Americans still aren’t getting enough exercise. CBS News shared findings from the Centers for Disease Control and Prevention in 2013 that revealed nearly 80% of Americans don’t meet the weekly recommended amount of exercise. Combine that with busy schedules that leave most adults sleep deprived, and finding the time for a sweat session seems laughable.

Consider how long it takes to get to work or school. Turning that idle time usually spent looking at your phone or listening to the radio into a workout is entirely possible. With a little bit of planning and the right gear, getting your workout in can become a regular part of your day. You might even look forward to it.

As states work to improve bicycle transportation through efforts like bike share programs and improved lanes, it’s becoming easier than ever to make this activity a reliable way to get from point A to point B. It’s also a great way to get in shape. According to Bicycling, a 150-pound person pedaling at a rate of 14 to 16 miles per hour can scorch around 340 calories in 30 minutes. Do it twice a day and that number doubles.

If that’s not reason enough to strap on a helmet and hop on the two-wheeled transportation, keep in mind that there are benefit programs that offer a small amount of monetary compensation for employees who bike to work. 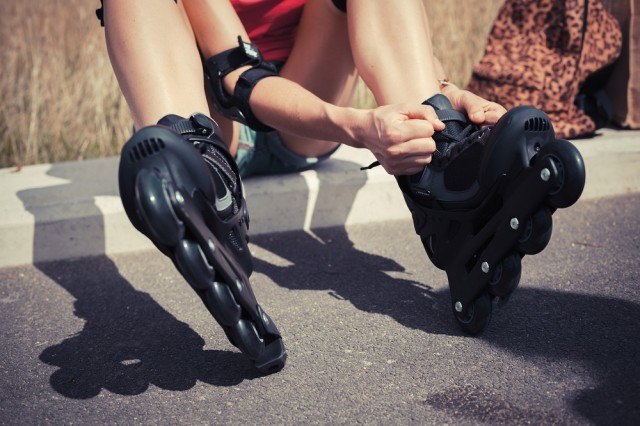 Not just for a fun game of hockey, rollerblades are an excellent way to get around and increase your heart rate. According to Livestrong, a 160-pound person can burn up to 913 calories by rollerblading for an hour. It’s also a better choice than running for people who have problems with sore knees or other joints because it’s a low-impact activity.

When skating, remember to arm yourself with the right gear. That means a helmet and knee pads. It might look a little dorky, but it’s always better to be prepared. Confused on where to start? Inline Skates offers some great tips on choosing and buying the best rollerblades for you.

According to data reported by The Atlantic, only about 3% of Americans walk to work. While it might not be practical for those commuting from one city to another, there are plenty of people who should consider skipping the subway and hitting the pavement instead. Google maps estimates the average walking pace to be around 19 minutes per mile, which means even a 3-mile commute will take under an hour. A 150-pound person will burn roughly 225 calories for that effort, based on Everyday Health’s calorie calculator tool.

But keep in mind that picking up the pace is always an option. You’ll get to your final destination faster, and you might increase your lifespan. Scientific American reported that a study found strolling at a faster clip is linked to longevity in elderly folks. Stephanie Studenski, a former professor of medicine at The University of Pittsburgh, said in the story that walking speed is “a powerful indicator of vitality.” With nothing more required than a decent pair of shoes, walking is also the most cost-effective way to get around. 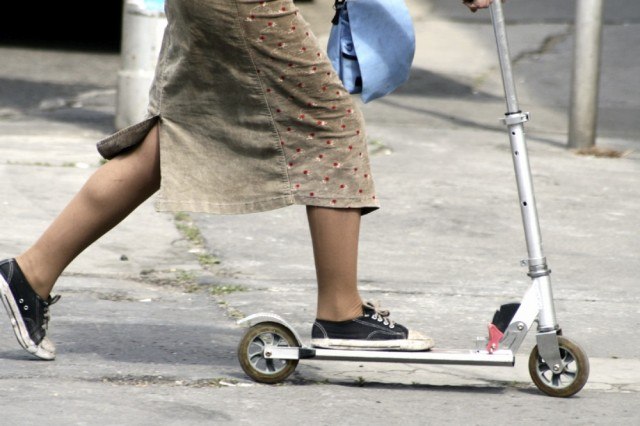 We’re not talking about the miniaturized motorcycles college kids are so fond of, but the kind that you push by foot. Before you laugh, consider this recent story in The Independent where the author encourages others to follow her lead. As Jane Merrick points out, one of the benefits scooters have over bikes is compact storage. There’s no more worrying about whether or not your ride is safely locked outside when it’s packed into your desk.

The jury may be still be out on exactly how much physical benefit you’ll get from this activity, but blogger and personal trainer Carla Birnberg is a fan.

Skateboards aren’t just for teenagers; they’re also a pretty decent way to accelerate your heart rate while getting around. According to Men’s Fitness, skateboarding can torch between 8 and 12 calories per minute while helping to sculpt your lower body.

If you think it doesn’t sound like a realistic way to get to work, think again. The New York Times reported that these four-wheeled boards are a completely feasible way for even professionals to commute. And Entrepreneur suggested skateboarders might hold the keys to startup success.

It might sound crazy, but lacing up your running shoes is one of the best ways to get to the office. Though statistics for how many people jog to work aren’t available, the rise in popularity of sites like The Run Commuter suggest more and more people are turning to this option for both the efficiency of skipping lines and stoplights as well as the health benefits. Runner’s World’s calorie calculator predicts a 150-pound runner will burn 454 calories after 4 miles, even at a modest 10-minute-per-mile pace.

The Guardian offers some great tips on how to make it a regular part of your schedule. That includes the issue of bathing. The article suggests considering running home if you don’t have access to a shower at work. As an added benefit, it’s a healthy way to blow off a little bit of steam at the end of a tough day.