6 Whiskey Drinks Every Millennial Should Know

The whiskey market is doing better than ever, and it’s mostly thanks to the shifting palates of millennial drinkers, according to reports from MarketWatch. Is it the smoky sweetness? The chill and the kick? The smooth, mysterious depth of caramel and vanilla against the warming burn of alcohol? Maybe all of those, maybe none, but one thing is certain: whether it’s Irish, Kentucky, Tennessee, Canadian, Japanese, or Scottish, whiskey is where it’s at. Sure, you could always drink your whiskey neat or on the rocks, but that’s akin to saying, “I’m only ever going to eat eggs if they’re cooked over easy.” That’s great sometimes, but limiting yourself means you never get to eat a cake or fresh pasta. There’s a whole world of whiskey drinks available, and while this list certainly doesn’t cover them all, these six are quintessential whiskey drinks with which to get acquainted.

When it comes down to how to drink your whiskey, it’s worth knowing what you’re asking for. Before getting into the mixed drinks you should know, though, it’s important to learn a little about the options for your most important ingredient.

A quick primer on whiskey

All whiskeys are distilled liquors made from fermented grain mash, except in the event that they’re made from corn. They’re almost always aged in wooden barrels, except for “white dog” whiskey, more commonly known as moonshine. The aging process mellows the bite of the drink and imparts those caramel notes. To really delve into the world of whiskey, scour sites like Whisky Advocate.

Scotch is only made in Scotland and can range from smooth and a bit sweet to smoky, a distinct flavor imparted by smoking the grains over a peat fire. Old scotches are typically not mixed — why waste the nuance? — but don’t think that a good scotch can’t make a great cocktail.

Irish whiskey is basically any whiskey aged in either Ireland or Northern Ireland. There’s a lot of diversity in this pool, leading to whiskeys that are sweet or spicy or citrusy or earthy.

Bourbon is generally sweeter than Irish whiskey or scotch. Wheated bourbons like Maker’s Mark are particularly mellow. Interestingly, CNBC reports that 95% of the world’s bourbon is made in Kentucky. [Correction: An earlier version incorrectly stated that bourbon can only be made in Kentucky.]

Tennessee whiskey is effectively bourbon made in Tennessee. Jack Daniel’s is Tennessee whiskey, and it’s mellowed through sugar maple charcoal before aging; some say this makes it a bit sweeter than bourbon and slightly sooty. 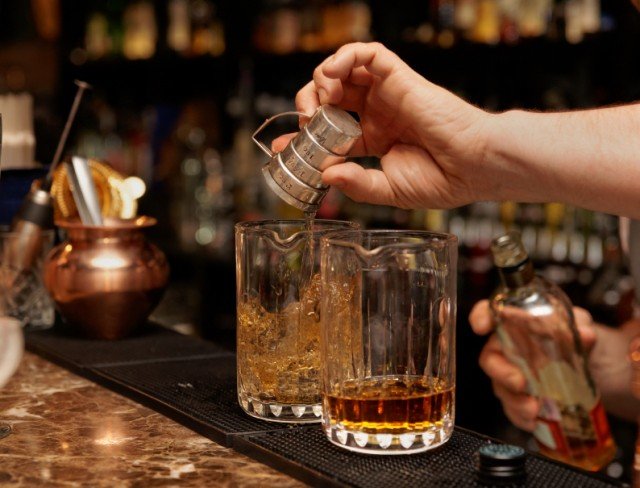 The old fashioned will always be first on a list of whiskey drinks because it’s the classic whiskey cocktail. Originating sometime in the 1800s, it’s a solid example of a true cocktail and a drink you should know both how to make and order. If you aren’t careful to add a balanced whiskey you like, it can be too sweet. If you like the sweeter side, try a Tennessee whiskey. If you like something a little more intensely flavored, try a rye or even a scotch. For a viscous, syrupy, and balanced classic, though, stick with bourbon.

This old fashioned recipe from Cask Strength does two great things: It uses a length of orange peel, not a wedge, and you stir over ice to chill and dilute the drink in the mixing glass, not the serving glass. This means that the ice it’s served with is kept fresh longer, keeping your drink colder and less watery. When it comes to a cherry, if making your old fashioned at home, get yourself a jar of Luxardo cherries. They’re delicious, deep, dark candied cherries that have little in common with the rubbery neon red orbs you should only ever put in your drink for nostalgia.

One more note: This recipe uses simple syrup instead of the traditional sugar cube. You’re welcome to use a sugar cube, but the simple syrup keeps your drink from being grainy when the sugar cube doesn’t fully dissolve.

Fill a mixing glass to the top with ice. Measure out your booze and your sugar, and dash in the bitters.

Stir. If a drink is all alcohol and no juice, it’s stirred and not shaken. If there’s juice, go ahead and shake. Strain into the chilled cocktail glass over fresh ice. Squeeze the orange peel over the glass and squeeze; drop the peel into the glass. Add a cherry if you wish. 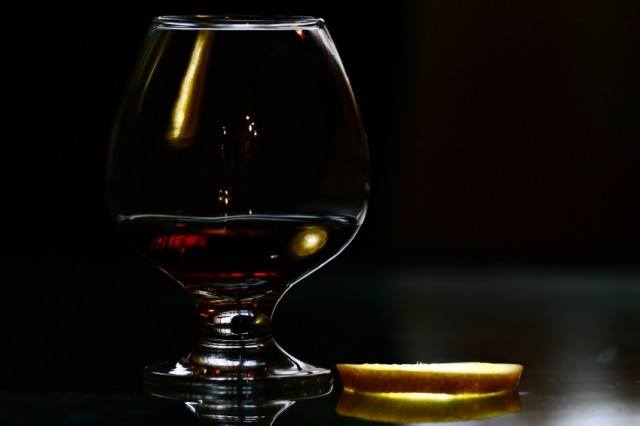 Sazerac is the official cocktail of New Orleans. It was originally made from cognac, which is a variety of brandy from Cognac, France, making sense for a New Orleans-born drink. At some point, though, the liquor in question changed to rye whiskey, and the world was better for it. This drink will introduce you to the concept of a rinse; you want the flavor of absinthe but it can’t overpower anything, so you swish ¼ ounce of the stuff in the glass and then discard the rest. Some bartenders use a little spray bottle, which diminishes waste. The sazerac uses Peychaud’s Bitters, which are lighter and more floral than angostura, but this recipe from Chowhound utilizes both for good measure.

Directions: Put the sugar cube in a mixing glass with just enough water to moisten it. Use the back of a barspoon to crush the cube.

Add the rye, both bitters, and ice and stir until chilled, about 30 seconds.

Add the absinthe to a chilled Old Fashioned glass. Turn the glass to coat the sides with the absinthe, then pour out the excess. Strain the rye mixture into the absinthe-coated glass.

Twist and squeeze the lemon peel over the glass. Rub the rim of the glass with the peel, drop it into the cocktail, and serve. 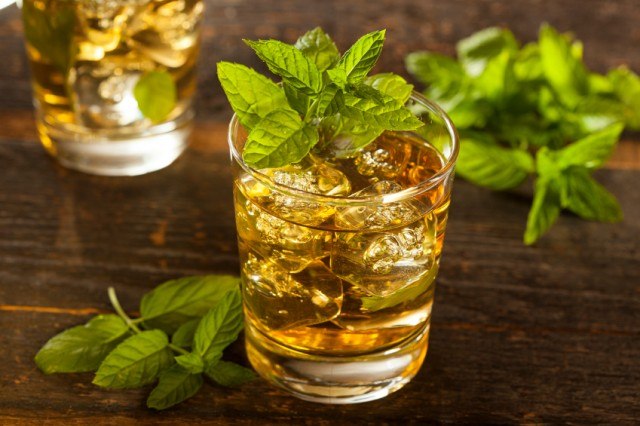 The mint julep is the Derby classic. It was designed to be refreshing, cooling, and boozy while showing off the state’s spirit. Everything about this drink was meant for a hot day in the sun. It’s traditionally served in a silver or pewter cup with crushed ice up to the rim to maintain maximum frostiness for that incredibly hot Kentucky May day in the sun.

If you want to get fancy and you don’t particularly like bits of mint leaves in your bourbon, plan ahead and make a mint simple syrup like this one from Martha Stewart. You want a good bourbon that you like for this drink, because you’re really going to taste a lot of it while sipping this drink. This recipe is adapted from Cindy Kebbell of Old Seelbach Bar in Louisville, Ky., via Epicurious. She uses a minted simple syrup, but you could just muddle a few sprigs of mint with some sugar.

The whiskey sour isn’t fancy, but it’s loyal. It’s an easygoing drink. In this recipe from Serious Eats, cocktail blogger Paul Clarke calls the whiskey sour the “comfortable T-shirt of drinks.” It’s the sort of drink that doesn’t judge you for the bad TV you watch or the time you spend lounging on your couch in holey socks. Don’t bother with bottled sours mix here — just squeeze a lemon.

If you’re feeling adventurous, add an egg white to your mixing glass before you add the ice and shake vigorously. The egg creates froth and body for a drink with, as Clarke says, a little more gravitas. At this point, you’ve made yourself a Boston sour.

Directions: Pour ingredients into a cocktail shaker, fill with ice, and shake for 10 seconds; if using the egg white, give it a little extra muscle and a little extra time. Strain into a chilled cocktail glass, or into an ice-filled old fashioned glass. Garnish with a cherry, a slice of orange, all of the above, or nothing at all. 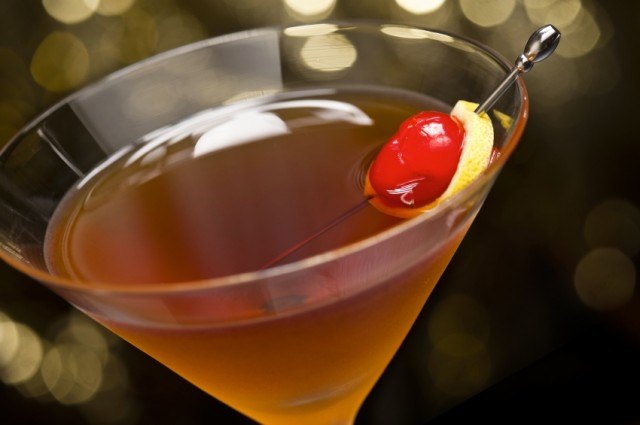 A well-made Manhattan is a thing of beauty, but a poorly made Manhattan can turn you off cocktails for a while. There are two recommended ways to drink this cocktail: with rye or with scotch. Using scotch turns this drink into a Rob Roy, but that’s just fine. We like those, too. Using bourbon or Tennessee whiskey for this drink is toeing the line into a surefire way to end up with a sickly sweet concoction.

The Manhattan should be a very simple drink: rye, vermouth, and bitters stirred with ice. The herbal notes of the vermouth need a strong spiciness for balance, and the bitters counteract its slight sweetness. When it comes to ordering at a bar, unless you specify, you’ll end up with a sweet, bourbon-based drink. Either specify you want a rye or just go straight for the Rob Roy. At home, play around with this recipe from Food Network. As with the old fashioned, use a Luxardo cherry in place of a neon maraschino cherry.

Directions: Place ice in a cocktail shaker. Add the whiskey, vermouth, and bitters, and stir well. Rub the orange peel around the rim of the cocktail glass. Strain the drink into the glass. Add 1 or 2 cherries.

If you’re cold from the inside out, a hot toddy is one of the best ways to warm up. Essentially, you’re making tea with whiskey instead of tea leaves. It’s simple, soothing, and delicious, with enough honey and lemon to argue its worth as a cold remedy. This is a great place for Irish whiskey, as it’s a popular way to warm up from cold Irish rain, but whatever you use, make sure it’s not too subtle.

The toddy can be made with lemon or orange, depending on your personal flair, and either whole cloves or a cinnamon stick. For a solid recipe to get to know the drink with plenty of warming power, try this one from The Guardian.

Directions: Put the water in a small pan along with the spices and peel over a low heat. Bring to a gentle simmer. Meanwhile, rinse a heatproof glass with hot water and dry.

Pour the whisky into your warmed glass, then pour over hot water and spices. Stir in the honey and lemon juice and taste for sweetness. Top with a little nutmeg and sip slowly, breathing deeply.