Parsnips are so underrated in the U.S., but they’re in peak season right now. Loved most by farmers and Brits (does that not boost your confidence?), it seems, these pale root vegetables deserve so much more affection than they get. First, forget whatever nonsense you heard years ago about white vegetables being less good for you. Though clearly not overrun with vitamin A, parsnips have more fiber and vitamins C, K, and E than their close cousin the carrot. The parsnip is also rich in B-complex vitamins such as folate and thiamin.

Parsnips grow much like carrots and look very similar to parsley roots, but are much sweeter. They are harvested at their best after the first hard frost, as the cold begins to transform the starches to sugars, and can be left to overwinter. As the first thing to harvest in the spring thaw, it’s the root that keeps on giving; they keep getting bigger and bigger until, as soon as the ground warms enough to pull the parsnip out, it’s big and as sweet as a vegetable can be. Though not nearly as sexy as an orange in the bleak throes of winter, parsnips are winter vegetables well-deserving of a place on your table. If you need convincing, pick up a few from the market and try any one of these delicious recipes. You won’t need another reason to make the rest.

1. Pasta With Parsnips and Bacon

There’s no better introduction to anything than to toss it in with pasta and bacon, so if you’re unsure of parsnips’ role in your kitchen, this is a great primer dish. The New York Times says there are “few dishes that are cozier on a cold winter night,” and we couldn’t agree more. The parsnips roast down to become buttery and soft, echoing the silkiness of the pasta, and the bacon adds a necessary salty richness to the creamy dish.

Directions: Heat oven to 400 degrees Fahrenheit. Toss parsnips with oil and season with salt and pepper. Roast, tossing occasionally, until parsnips are golden and tender, about 25 minutes.

Meanwhile, bring a large pot of salted water to a boil. Cook pasta according to package instructions until 1 minute before it’s al dente. Drain.

In a large skillet over medium-high heat, brown the bacon until crisp, about 5 minutes; use a slotted spoon to transfer bacon to a paper-towel-lined plate to drain. Discard all but 1 tablespoon of fat from the pan.

Return skillet to heat and add leeks. Cook in remaining bacon fat until softened, about 5 minutes. Stir in heavy cream and cooked bacon. Simmer mixture until slightly thickened, 2 to 3 minutes.

Stir in pasta, parsnips and cheese. Simmer until heated through and cheese is melted, then remove from heat. Season with salt and pepper; toss with parsley. Serve drizzled with olive oil, with quite a bit of black pepper on top.

These baked parsnip fries are enough to make you (almost) forget about their starchy French counterpart. They’re vegan as written, but they’d go amazingly well beside a spice-rubbed, lemon-stuffed, crispy roasted chicken. This recipe from A House in the Hills makes enough cashew cream for leftovers, which sounds like the best possible addition to sandwiches for the rest of the week.

Directions: Preheat oven to 375 degrees Fahrenheit. Peel parsnips and slice into fries. Mix parsnips, coconut oil, and paprika and scatter in one layer on a large roasting pan lined with parchment or a silpat. Roast for 25 minutes, then toss parsnips and increase heat to 500 degrees Fahrenheit. When the oven reaches temperature, cook until crispy — 5 to 10 minutes — watching closely to avoid burning.

While parsnips are roasting, combine cashews, preserved lemons, salt, and almond milk to blender. Blend until creamy, adding more almond milk if needed to achieve a consistency you like. Add additional salt to taste.

To serve, spread fries over plate or serving platter, drizzle cashew cream sauce over top, sprinkle all with maldon salt and garnish with a small handful of fresh chopped curly leaf parsley.

Parsnips add a delightfully creamy consistency to soup while also imparting both a bit of sweetness and a bit of spice. This soup from Deliciously Ella ups the ante with turmeric, ginger, mustard seeds, and chilli, making it a big bowl of warmth from the inside out. Roasting the parsnips is a step that can’t be missed; the concentration and caramelization of the roots adds an extra level of depth to the soup.

Directions: Preheat the oven to 350 degrees Fahrenheit, then chop the parsnips into large chunks and toss with olive oil. Arrange on a baking tray and sprinkle with salt and red pepper flakes. Roast for 45 minutes.

Place all ingredients into a blender and blend until smooth, in batches if necessary. Pour blended soup into a pot and rewarm before serving. 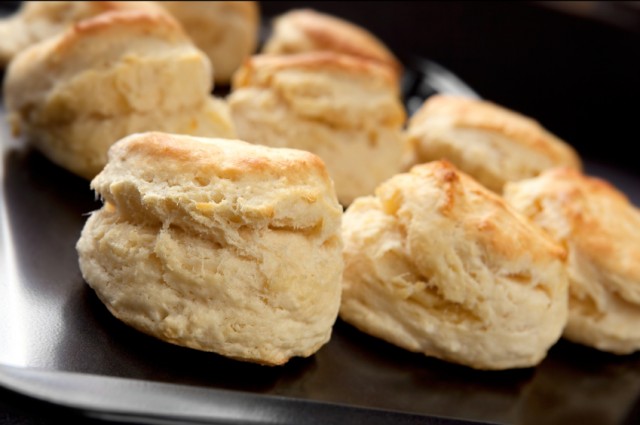 These biscuits hailing from Food52 are inspired by Chef Edward Lee’s from his cookbook, Smoke and Pickles: Recipes and Stories from a New Southern Kitchen. They’re still plenty buttery, but they have an extra earthy sweetness that’s accentuated by a healthy kick of black pepper. They’re perfect for using up any parsnips that you’ve already puréed or leftover roasted parsnips that you can purée, but they’re good enough to take the time to simmer and purée just for the express purpose of making biscuits.

Directions: Heat your oven to 425 degrees Fahrenheit. In a medium mixing bowl, stir together the flour, salt, baking powder, and black pepper until combined. Using your fingers or a pastry cutter, blend in the cold butter.

In another bowl, whisk together the parsnip puree, honey, and buttermilk until well blended. Make a well in the middle of the dry ingredients and add the wet ingredients into the well; stir just until you have a shaggy dough. If the mixture seems too dry, add a little more buttermilk one tablespoon at a time until the mixture comes together in a sticky, shaggy dough.

Bake the biscuits until they’re golden brown and puffed, about 13 to 15 minutes. 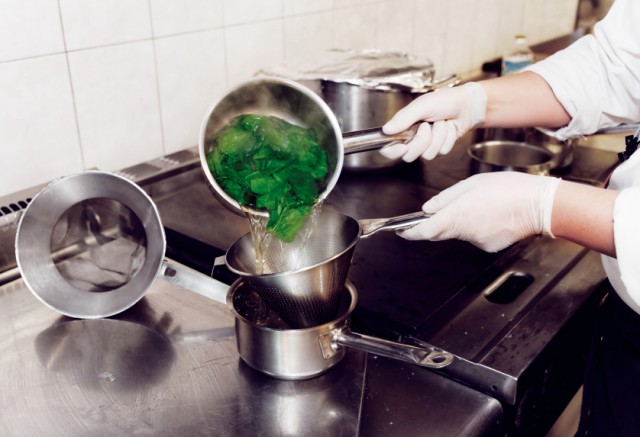 That same earthy sweetness that added depth to the biscuits perfectly balances out the mild bitterness of spinach in this dreamy side dish from Food and Wine. Twenty cups of spinach may seem like a lot, but remember that it cooks down to a fraction of the volume you’re starting with. If you’re more inclined to use frozen spinach, you’ll need about one-and-a-half packages.

Directions: In a large, deep skillet, melt 2 tablespoons of the butter in the oil. Add the parsnips and cook over moderately high heat, stirring occasionally, until lightly browned, about 6 minutes. Add the shallots and cook, stirring, until softened, about 2 minutes. Add the stock and thyme and bring to a boil. Season with salt and pepper, cover and simmer over low heat until the parsnips are tender, about 8 minutes.

Meanwhile, fill a large, deep pot with 2 inches of water and bring to a boil. Add the spinach in large handfuls and blanch, stirring, just until wilted, about 10 seconds. Drain and cool under running water. If you’re using frozen spinach, skip that step and thaw the packages. Squeeze the spinach dry and coarsely chop it. Stir the spinach into the parsnips.

In a medium saucepan, melt the remaining 2 tablespoons of butter and cook over moderately high heat until lightly browned, about 4 minutes. Whisk in the flour and cook, whisking, for 1 minute. Whisk in the half-and-half and nutmeg, season with salt and pepper and bring the sauce to a boil, whisking until thickened, about 2 minutes. Stir the sauce into the spinach and parsnips and bring to a simmer. Transfer to a bowl and serve. 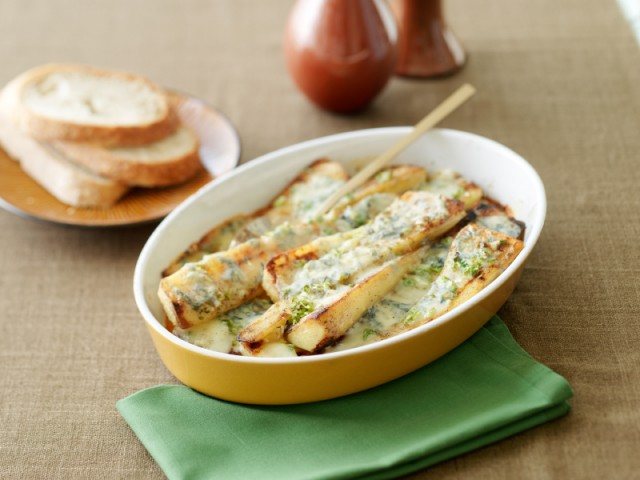 These oven-braised parsnips from Gourmande in the Kitchen are tender, earthy, sweet, and nutty all at once. The yogurt stirred in at the end adds a nice tang that balances the dish. With these, you’ll want to look for parsnips on the slender side to ensure you’re not going to end up with a tough core.

Directions: Preheat the oven to 400 degrees Fahrenheit. Slice the parsnips in half and then again in quarters lengthwise to make batons.

Place the cut parsnips in a shallow baking dish large enough for the vegetables to lie in one layer. Add the olive oil, water, thyme, salt, and black pepper. Toss to combine.

Cover tightly with a lid or foil. Transfer to the oven and cook for 30 minutes until the parsnips are very tender.

Remove from oven, uncover and let cool for a minute or so before stirring in the yogurt and season again to taste if desired. Sprinkle with grated cheese and serve immediately with a sprinkle of extra thyme leaves on top.

Don’t let savory foods have all the fun! Much like making a carrot cake, this glazed cake from Food52 is soft and full of warm spices. It’s lightly flavored with dark rum and sweet with apples and plumped raisins. The parsnips add just a touch of spiciness to the cake.

The recipe calls for golden baker’s sugar, which isn’t a staple in most kitchens. It’s a bit like sugar in the raw, only much finer. To approximate the subtle molasses flavor and the grain side, mix ⅔ cup light brown sugar with ⅔ cup white sugar.

Directions: Add the raisins, ⅓ cup of the apple cider, the rum, and the vanilla bean, scraped, both seeds and pod, to a small bowl or container. Cover the bowl or close the lid on the container and allow it to sit overnight.

In the bowl of a mixer, cream the butter and sugar for 3 to 4 minutes on medium speed until light and fluffy. Add the eggs one at a time, mixing thoroughly after each. Sift together the flour, the baking powder, the ground cinnamon, the nutmeg, and the salt. Add the dry ingredients to the wet, mixing the batter on low speed, just until everything is incorporated.

Meanwhile, peel and core the apple. Peel the parsnip. Shred both with a box grater or the shredding disk of a food processor. Add the shredded apple and the parsnip to the batter.

Spoon the batter into the greased Bundt pan and move the pan into the oven. Bake for 45 minutes, or until the top is golden brown and a toothpick comes out clean. Out of the oven, allow the cake to cool for at least 1 hour.

While the cake is cooling, make the glaze: In a small bowl, whisk together the powdered sugar with the remaining 3 tablespoons apple cider and the lemon juice.

Take the cake out of the pan and move it to a plate. Pour the glaze all over the top. Allow the glaze to set, and serve.