7 Harry Potter Film Spots In London Any Muggle Can Visit

We may not have received our letters from Hogwarts (yet), but there’s no reason even Muggles can’t take in the most magical sights from the Harry Potter series on a visit to England’s capital city. London’s winding streets offer a Muggle-friendly charm all their own, but they can also lead us on a tour of Harry’s escapades — all the way from Sorcerer’s Stone to the Deathly Hallows.

But don’t take our word for it — live the magic for yourself! Visit these 7 sites for a whirlwind trip through the world of wizardry. 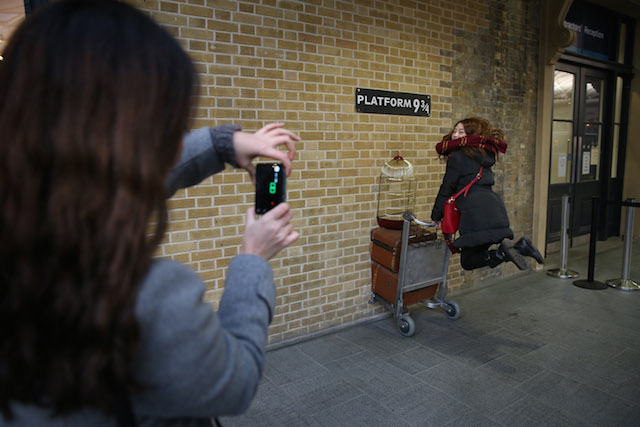 King’s Cross is where all the young Hogwarts students go to catch the train back to school each fall, taking the secret Platform 9¾. Witches and wizards have to nonchalantly walk through the wall between platforms 9 and 10 to get to the Hogwarts Express, which can be an unnerving experience your first time doing it. Harry first encounters Platform 9¾ when he goes off to Hogwarts in Harry Potter and the Sorcerer’s Stone, but luckily he has the Weasleys to help him figure it out.

Near the entryways to Platforms 9, 10, and 11 lies the mythical platform, indicated by a plaque and a baggage cart that appears to be moving through the brick wall. Visitors now flock to the site every day to have their pictures taken with the cart and platform, as well as to visit the Platform 9¾ gift shop, offering all sorts of Potter wares. While you’re here, be sure to check out the rest of this sprawling station: In addition to being one of London’s biggest transit hubs, it’s home to a number of retailers and eateries. Just steps away are such sites of interest as the British Library, which offers rotating literary and cultural exhibits, and scenic Regent’s Park. Visit the King’s Cross website for more information. 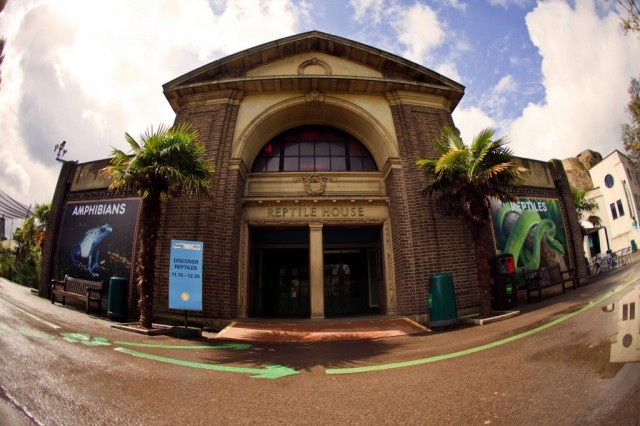 The London Zoo was the place where 10-year-old Harry first realized he had magical powers when he spoke to and accidentally freed a snake at the zoo’s Reptile House in Harry Potter and the Sorcerer’s Stone. A family trip with the Dursleys to the zoo ends with Potter unwittingly making the glass of the Burmese python’s cage disappear so that Dudley would fall into the enclosure. The snake slithers off, but not before hissing “thanks” to Harry for freeing him.

Situated right off breathtaking Regent’s Park, the London Zoo offers glimpses of more than 800 animal species, along with live shows and interactive exhibits that the whole family will enjoy. Exhibits are surrounded by impressive heritage-listed buildings and beautifully manicured gardens, adding a sense of regal splendor to the visit. Of course, Harry Potter fans will want to make their way to the Reptile House to catch the spot where young Harry performed one of his earliest feats of wizardry! Learn further details about the London Zoo on their website. 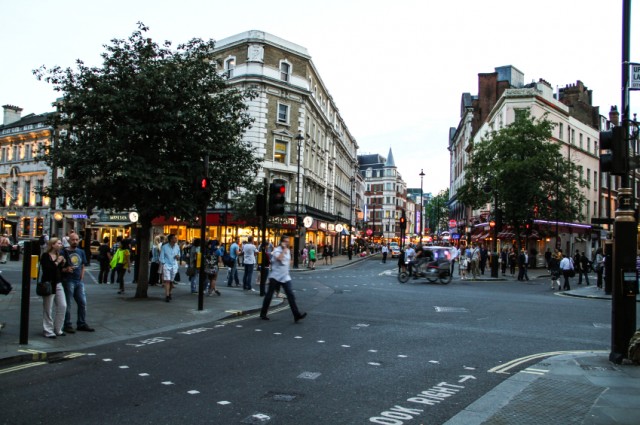 Diagon Alley is the fictional wizarding shopping district where young Harry goes in Harry Potter and the Sorcerer’s Stone to buy all his school supplies for the upcoming year at Hogwarts. The entrance to Diagon Alley is marked by the pub the Leaky Cauldron, which to non-wizard or Muggle eyes appears to be a closed storefront on Charing Cross Road in London. The Leaky Cauldron also serves as a boarding house, and Harry lives there for a brief period during the beginning of Harry Potter and the Prisoner of Azkaban.

Visitors will love this quintessential London street, which carves a charming and windy path through central London. Strolling down Charing Cross Road, sightseers will encounter a number of specialist and secondhand bookshops. The area is also home to larger, more generalist literary vendors such as the celebrated Foyle’s, TripAdvisor notes. Breaking off of Charing Cross toward the east is Denmark Street — home to a remarkable cache of musical history, observes Mojo. 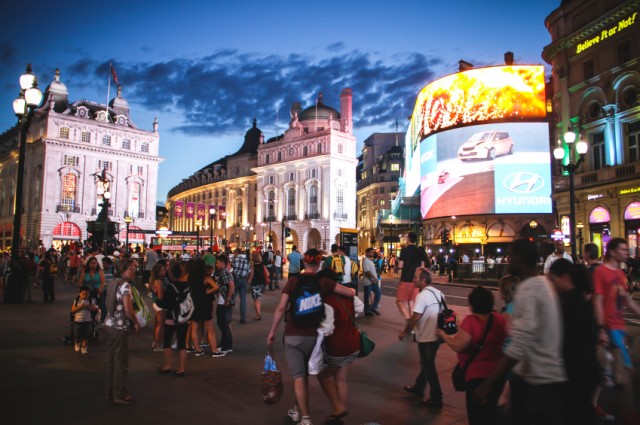 In Harry Potter and the Deathy Hallows: Part I, Harry and company are chased through London’s West End by Death Eaters after Hermione apparates her, Ron, and Harry to the middle of Piccadilly Circus, right in front of the Gap. All this taking place out in the open in Piccadilly Circus heightens tension because suddenly there’s magic happening among all the Muggles, who aren’t supposed to know about the wizarding world.

One could easily spend a full day people-watching by the Eros statue in bustling Piccadilly Circus — but if visitors do find themselves in need of a way to pass the time, the area is home to hundreds of shops, cafes, restaurants, and pubs, all waiting to be seen. Those looking to take in the London arts scene can also check out the scores of running theatrical productions right here in the city’s West End. Nearby Leicester Square also packs in the crowds as home to several casinos and a frequent host of international movie premieres. 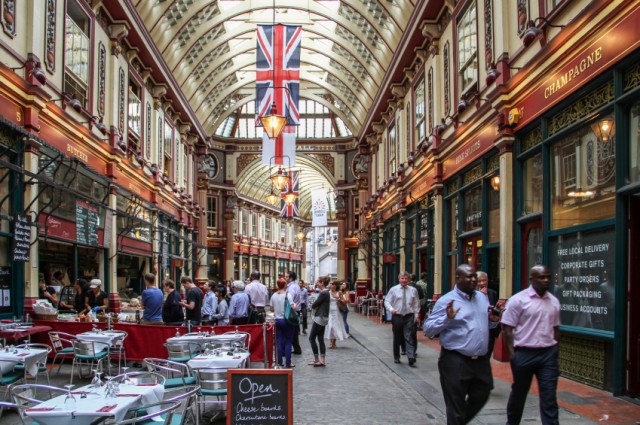 Leadenhall Market was the place used to film the scenes of Diagon Alley during the first Harry Potter movie. The beautiful, historic covered market was the perfect setting to use for Diagon Alley and its topsy-turvy collection of shops for magical goods.

The elegantly covered Leadenhall Market — located in what was once the center of Roman London, as noted by the market’s official website — dates back to the 14th century. Today, flowers, meats, cheeses, and fresh foods are all sold beneath its beautiful Victorian-era roof. For a glimpse into centuries past, look for the wrought-iron hooks on shop fronts where 19th-century vendors used to hang their produce. Visitors to Leadenhall Market can pass their time in shops, restaurants, cafes, and pubs peppered throughout the concourse.

The Ministry of Magic is the main organization that governs the magical world of Harry Potter. While the main building that houses the Ministry is located underground, the outside of the entrance is on the famous Great Scotland Yard.

Westminster is one of the more convenient places on your journey, being a central stop on the Tube’s Jubilee, Circle, and District lines. There’s not much to see in the station itself, but upon ascending the staircase outside, you’ll be greeted with some of London’s most familiar sights: Big Ben, the Houses of Parliament, and Westminster Abbey. Walking up Whitehall, visitors will pass Great Scotland Yard — the site of the one and only Ministry of Magic (as non-Muggles know it, that is). Just beyond this point, sightseers should be sure to check out Trafalgar Square, home to the National Gallery, along with a host of other London hotspots. 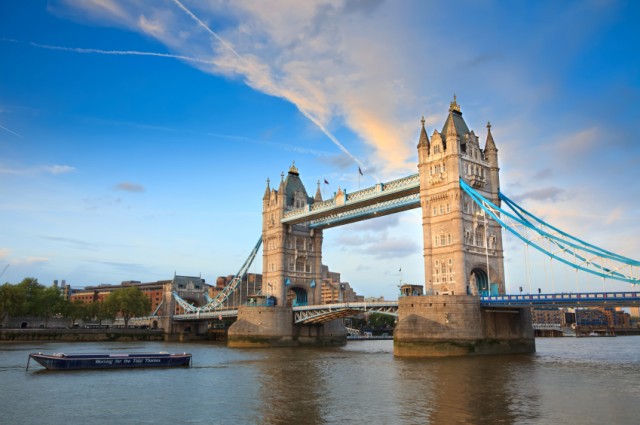 In Harry Potter and the Order of the Phoenix, Harry and the rest of the Order are seen flying on their broomsticks along the Thames river and under the Tower Bridge in London. The members of the secret organization founded by Dumbledore come and get Harry from the Dursleys’ home on Privet Drive to their headquarters at Grimmauld Place, meanwhile taking a scenic ride along the Thames.

The Tower Bridge is one of London’s most iconic sights (you’ll find it on more than its share of souvenir postcards) and is certainly worth seeing while in town. Built in the late 19th century, the bridge was originally the only crossing for the Thames. Nowadays, the drawbridge continues to serve as both a major thoroughfare and a tourist attraction. Check out the Tower Bridge Exhibition, which allows guests to enter the bridge’s upper walkways, taking in its structure and impressive Victorian engine rooms up close. While you’re in the area, take a short walk to the must-see Tower of London, a paramount political site dating back to the year 1066.