8 Best Fireworks Displays to Celebrate July 4 With a Bang

The Fourth of July appeals to everyone. Young and old gather to celebrate our country’s independence by spending time with family and friends, partaking in festivals, and, of course, gathering to watch the beautiful firework displays that decorate the sky. Hoping to catch one of the best displays in the U.S. this year? Here are eight of the most breathtaking Fourth of July firework displays.

Macy’s Fourth of July Fireworks show is one of the best and brightest in the U.S. The famous Macy’s display will be returning to the East River this year after several years on the Hudson River. The event is the country’s largest pyrotechnic show, promising a display filled with 40,000 fireworks that over three million people watch. 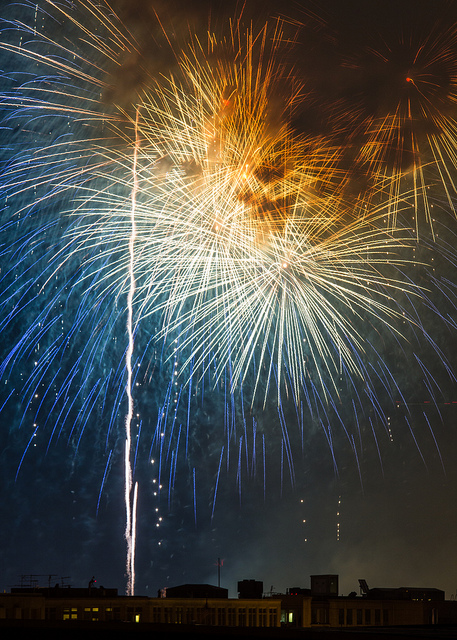 Home to one of the largest firework displays in the country, Business Insider writes that the Washington show costs about $255,000 to put on and lasts more than 17 minutes. Hoping to score the best seat? The fireworks are set off from the Reflecting Pool, so try to catch a spot as close to the National Mall as possible; it’s guaranteed to be the best seat in the house.

But don’t despair if you can’t get up close. The beautiful lights can be seen from miles away. If you’re determined to get a seat that’s close, consider packing a picnic and making a day of it so that you’re guaranteed a spot close to the action. You could also try a boat cruise or book a hotel that has a rooftop view if you’re hoping to take your fireworks experience a step further this year.

The beautiful Chicago fireworks are held on the Windy City’s Navy Pier. In 2013, the display cost a whopping $100,000, per Business Insider. If you’re hoping for an amazing view this year, try booking one of the several cruises that allow viewers to watch the fireworks from Lake Michigan. Just a warning: While the view is exquisite, a fireworks cruise is guaranteed to cost a pretty penny!

The Odyssey offers an upscale fireworks dinner cruise, which includes creative cuisine, a DJ and dancing, and, of course, a one-of-a-kind view of the beautiful display lighting up the sky.

Expect nothing less than the best with this city’s display. Nashville’s Music City July 4th: Let Freedom Sing event draws the largest crowds in the South to help celebrate the Fourth of July. The fireworks cost the city about $175,000 and lasted about 26 minutes in 2013, which was the city’s longest fireworks show ever held, per Yahoo!

Why is this display one of the best? The breathtaking fireworks are accompanied by music from the city’s Grammy winning Nashville Symphony. You’ll want to make sure to get there early so you can see a few awesome performances that lead up to the display. This year features Billy Currington, Ashley Monroe, and Striking Matches.

In 2013, the Boston display cost an astonishing $2.5 million, one of the nation’s most expensive by far. The show lasts more than 20 minutes and sets off dazzling pyrotechnics as high as 1,500 feet in the air; it’s also televised for those who can’t see it live, although many try to attend the event — a whopping 500,000 to 800,000 attendees head toward the Charles River each year. Prior to the fireworks, the Boston Pops hold a concert that begins with the National Anthem and flyover.

Guess who else will be attending the firework display this year? None other than the Beach Boys themselves, according to CBS. In addition, Megan Hilty, a Broadway star who played Ivy Lynn in the musical drama Smash, as well as Phantom of the Opera stars Ben Jacoby and Julia Udine, will also be at the 2014 firework display.

More than 10,000 total shells are fired from the Municipal Pier at Aquatic Park and a barge off Pier 39 in San Francisco each Fourth of July. That’s right — there are two sets of fireworks, synced to give you a glimpse of the display no matter where you’re sitting. The show is produced by Pyro Spectaculars, per MSN, and is the largest in the Bay area.

San Francisco Tourism Tips writes that the best seats in the house are along the northern side of the city. For the best view of the city’s flash, sparkle, and pop, try to get seats at Crissy Field, the Marina Green, or Aquatic Park.

Nobody celebrates our country’s birthday quite like Philadelphia. The annual Philly 4th of July Jam display takes place over the Philadelphia Museum of Art. It holds a free concert beforehand that leads up to the grandiose fireworks display. Who can you expect to see this year? The Roots, Nicki Minaj, Jennifer Hudson, Ed Sheeran, Aloe Blacc, and Vicci Martinez are few of the stars expected to be there.

According to Yahoo, get a spot on the lawn of the Philadelphia Museum of Art (get there early if you want one of these spots!), Benjamin Franklin Parkway, Boathouse Row, Kelly Drive, or Lemon Hill if you’re hoping for a great seat.

Visit Atlantic City to witness its fireworks and you’ll become one of the more than 250,000 people who take up their viewing positions along the boardwalk, Steel Pier, or one of the casino resorts each year. The show is so big that it takes two ocean barges and one marina platform to light up the island’s sky.

Something cool for 2014: The Atlantic City Alliance, which is now in its third year producing the fireworks, asked the people to choose the official soundtrack for this year’s show. After tallying nearly 3,200 votes in select song categories, the results of the song contest wound up featuring an array of New Jersey artists, as well as Blake Shelton, who is playing a free beach concert in Atlantic City on July 31, followed by another free beach concert by Lady Antebellum on August 3. So if you’re planning a trip to Atlantic City to see the display, stick around for a few days for some more fun entertainment!