Now that the 8 days of Hanukkah have started, it’s time to break out the frying oil. Dinners are made of brisket, donuts, and, of course, latkes. Though there’s nothing wrong with a traditional potato pancake, sometimes switching it up keeps traditions from getting a little boring. This Hanukkah, celebrate the miracle of oil by making a different, non-traditional latke every night of the holiday.

Tips to keep in mind when frying: 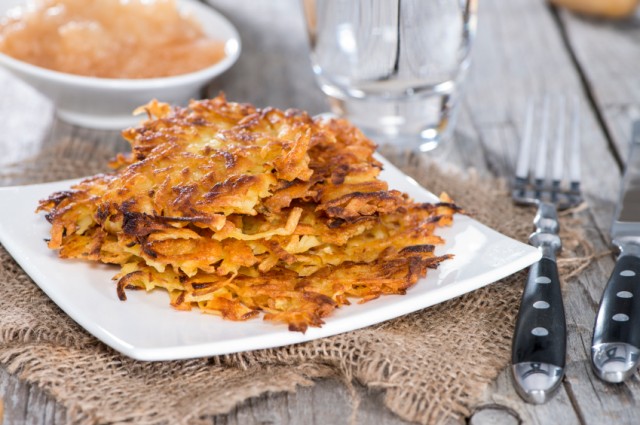 Before we depart too far from potato latkes, let’s ease in with a sweet potato pancake from the Food Network. With depth from the sweet potato and subtle sweetness from the parsnips, these latkes are made from a root vegetable dream team. The 5-spice applesauce really rounds out the flavors, too.

For the applesauce: Combine all applesauce ingredients in a large saucepan over medium heat. Cook for 10 to 15 minutes until apples begin to break down but haven’t lost all of their structure. Remove from heat and cool until ready to serve.

For the latkes: Grate the sweet potatoes and parsnips on a box grater or in your food processor and transfer to a large bowl. Season with salt and add flour; stir to combine. Add eggs and stir well.

Form 3-inch latkes that are about ½-inch thick.

In a large pan, heat oil. Fry latkes about 4 minutes per side or until golden brown and cooked through. Drain on a paper towel and season with additional salt. Serve with applesauce. 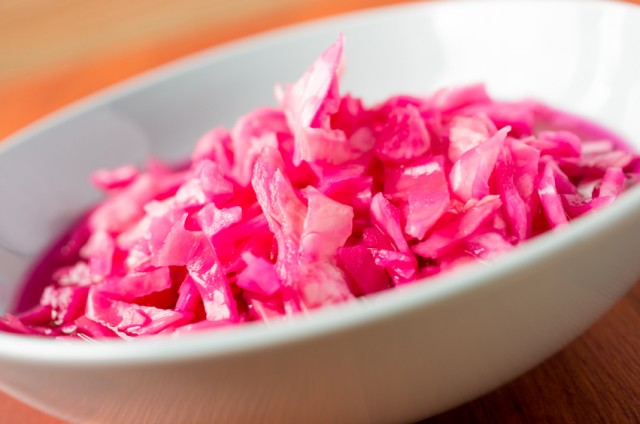 Whether you have leftover beets from a batch of borscht or you have a drawer full of the red roots that you haven’t worked your way through since your CSA ended, this variation on latkes from Bon Appétit via Epicurious is a great way to get all the potassium, magnesium, fiber, and iron found in beets along with all the frying oil. They’d pair well with an apple jalapeno salsa like this one or a celery and cilantro relish like this one.

Directions: Place beets in large bowl; press with paper towels to absorb any moisture or wring out with cheese cloth you’ll never want to see white again. In another large bowl, whisk flour and next 5 ingredients. Mix in beets, then eggs.

Pour enough oil into large skillet to cover bottom; heat over medium heat. Working in batches, drop beet mixture by ¼ cupfuls into skillet; spread to 3½-inch rounds. Fry until golden, about 5 minutes per side. Transfer latkes to baking sheet.

The way Deb Perelman of Smitten Kitchen makes fritters proves that she’s a New York Jewish woman to the bone — they really aren’t fritters so much as they’re non-potato latkes! These zucchini fritters take long strands of fresh zucchini and pancakes them. It’s almost enough summer squash to make you forget it’s winter.

Directions: Trim the ends off the zucchini and either grate with a box grater or an attachment on your food processor.

In a large bowl, toss zucchini with 1 teaspoon coarse salt and set aside for 10 minutes. Wring out the zucchini by wrapping it up in a clean dishtowel or piece of cheese cloth and squeezing out the moisture.

Returning the mixture to the bowl, taste for salt and then add scallions, egg, and pepper. In a small dish, combine flour and baking soda. Combine flour mixture with zucchini mixture and stir thoroughly.

Heat oil in a large skillet until shimmering. Drop small spoonfuls of zucchini batter into the oil a few at a time, lightly flattening with the back of a spoon or a spatula. Cook over moderately high heat until the edges underneath are golden, about 3 to 4 minutes. Flip the fritters and fry them on the other side until browned underneath again, about 2 to 3 minutes more. Drain briefly on paper towels then transfer to baking sheet and then into the warm oven until needed.

Celeriac is one ugly vegetable, but it’s the inside that counts. Lending a subtle celery taste with the creamy sweetness of a root vegetable, don’t shy away from this ugly duckling in this recipe from Food52. When preparing a celeriac root, don’t bother with a vegetable peeler. Grab a paring knife and chop off the ends, creating a flat surface, and pare down to the white flesh of the root.

In a large skillet, heat 3 tablespoons of olive oil on medium-high heat. Form latkes into roughly 2-inch mounds and add to pan. Flatten with spatula and fry each side for about 4 minutes before turning. Add more oil as needed. Blot extra oil on paper towels before serving.

For yogurt sauce: Mix all ingredients and stir to combine, adjusting amounts of ginger and apricot jam to taste. Serve with latkes. 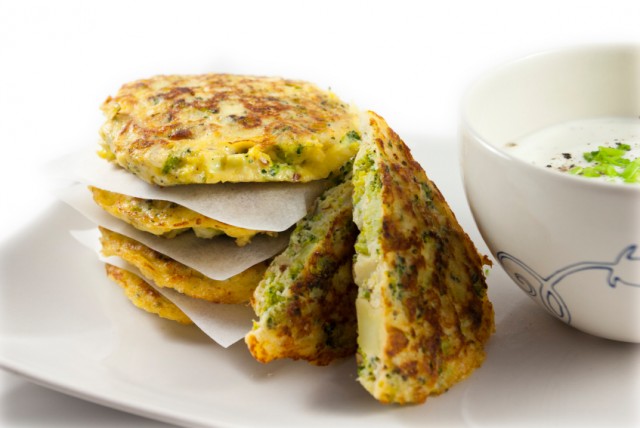 Take advantage of spaghetti squash’s natural strands to cut grating out of the equation with these beta-carotene-packed latkes from The Kitchn. The thin strands of squash really crisp up in these latkes, making them perfect for a latke enthusiast who loves the crispy crunch but hates the knuckle-scraping grating.

Directions: First, roast your squash. Preheat the oven to 400 degrees Fahrenheit. Cut the squash in half lengthwise and scoop out the seeds. Lightly drizzle the flesh with olive oil and season with salt and pepper. Roast in the oven, cut-side up for about 40 minutes or until tender.

Allow the squash to cool slightly, then use a fork to shred the squash into strands. Transfer your squash “noodles” to a strainer to drain any excess liquid.

In a large bowl, combine the sliced green onions, chopped parsley, chopped sage leaves, and minced garlic. Once the spaghetti strands have drained of excess liquid, add them to the bowl with the herbs and toss to coat. Fold in the egg, Pecorino Romano, chickpea flour, salt, and pepper. Toss all of the ingredients together until the mixture is well combined.

Using a spoon and your hands, form patties from the squash mixture. It’s recommended to form all patties before starting to fry them. Heat oil in a large pan and begin to fry latkes, being careful to not overcrowd them. They’ll take roughly 2 minutes per side.

Do you have halves and pieces and odds and ends of vegetables lying around? Use them up in this mixed-root vegetable latke recipe from Tara Duggan’s Root to Stalk Cooking via Leite’s Culinaria. If you’re looking for a multi-colored latke but don’t have scraps laying around, Duggan suggests grating 1 carrot, 1 beet, and 1 russet potato.

Place a large skillet over medium-low to medium heat and add enough oil to fill the skillet to a depth of ¼- to ½-inch. When the oil is hot, use a spoon to scoop up about 2 tablespoonfuls latke mixture, then use another spoon to press down on the mixture to make an oval patty. Gently slide the patty into the oil. Continue making patties with the spoons and cooking them without crowding them, until the latkes are browned, crisp, and cooked through, about 5 minutes per side. Place on paper towels or a brown paper bag to drain. 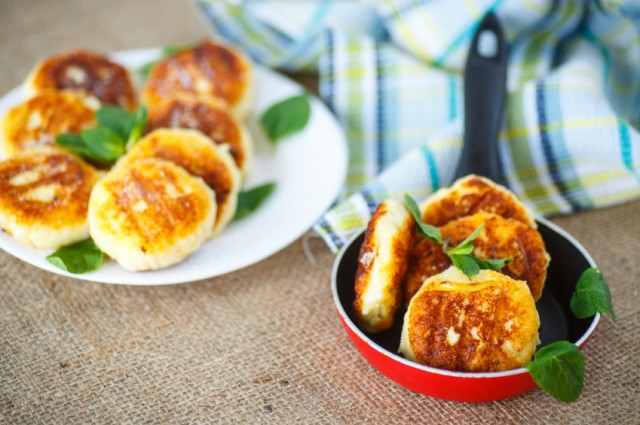 Directions: Cut the potatoes into 1-inch pieces. Transfer to a pot and cover with water. Bring water to a boil; reduce heat, and simmer until just tender, about 25 minutes. Drain the potatoes and mash with a potato masher or by passing them through a ricer. Stir butter, sour cream, and chives into the potatoes. Season to taste with salt and mix well. Spread the potato puree in a ½-inch layer on a parchment-lined baking tray. Chill in the freezer for 20 minutes.

Heat frying oil to a depth of ½-inch in a deep skillet to 375 degrees Fahrenheit. Fry the latkes a few at a time until they turn brown and crispy, about 2 minutes on each side. Drain the fried latkes on paper towels, and serve them hot. 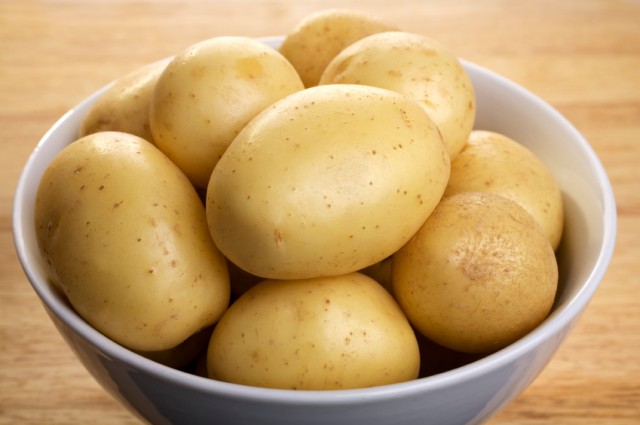 Latkes for breakfast? Sure! On a diet? Try this one. Or, if by the end of Hanukkah, you’re ready for a more traditional latke but just can’t eat something fried again, try this recipe for latke waffles from Deb at Smitten Kitchen. It’s still a departure from the traditional latke, but the only oil used in the making of this latke is a little spritz of nonstick spray on your waffle maker. Who doesn’t like potato waffles?

Directions: In a food processor or on a box grater, coarsely shred the potato and onion. For longer strands, lay the potato sideways in the chute of your food processor. Strain all the moisture out with cheesecloth.

In a large bowl, combine the onion and potato with baking powder, salt and black pepper over mixture and stir to combine. Add flour, and again, stir into the potato-onion mixture until the pieces are evenly coated. Crack eggs on top; use a fork to break up the yolks and stir them so that they’re evenly distributed through the batter.

Heat your waffle iron to high heat. Once hot, coat lightly with a nonstick spray. Heap some latke mixture on top and spread it into an even layer. Cook until the latkes are a deep golden brown underneath. Keep warm in an oven at 350 degrees Fahrenheit until all waffles are ready to serve.