WebMD calls quinoa one of the best whole grains you can eat, with high protein and iron content as well as zinc, vitamin E, and selenium. By now, though, we all know by now that quinoa is healthy and that we should be eating it. We’ve risen to the occasion and we’ve been eating a lot of quinoa. The Whole Grains Council says we imported 22.3 million pounds of quinoa back in 2010, a number that has no doubt grown since. All the way back in 2010 (seems so long ago in the food world, now), chefs named quinoa the hottest trend in side dishes in the National Restaurant Association survey on the matter. Then, it most certainly was; the United Nations dubbed 2013 the International Year of Quinoa. We’ve become a quinoa crazed nation, and that’s a good thing! We’re full of iron and vitamin E and getting vegetarian sources of protein in our grains.

With all this quinoa eating, we’re afraid you may be recycling the same old tired quinoa recipes over and over again, getting bored with this magical grain. Instead of making one more “old faithful” this week, try putting an international flair on your ancient grain and make one of these 8 recipes. 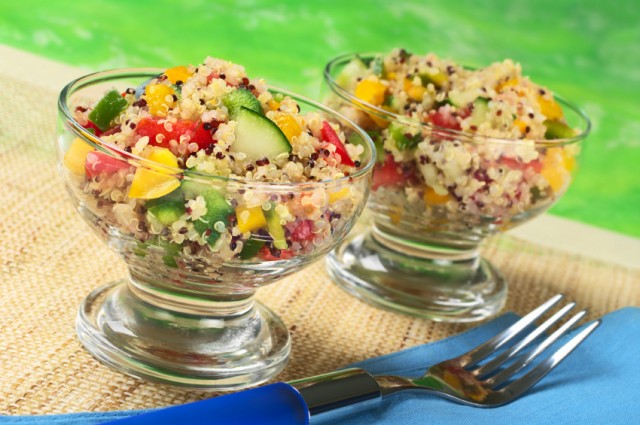 The best thing about this quinoa dish from Once Upon a Chef has to be that you can make it in the time it takes you to say its name. This dish really benefits from freshly squeezed lime juice as the star of the vinaigrette, so don’t try to cheat with the bottled stuff here.

Directions: Cook quinoa according to package instructions with the salt. Transfer to a bowl and let cool in the refrigerator.

In the meantime, make the dressing by combining the lime juice, fish sauce, vegetable oil, sugar, and crushed red pepper flakes in a medium bowl. Whisk until the sugar is dissolved.

Once the quinoa is cool, add the red bell peppers, carrots, cucumbers, scallions, fresh herbs, and dressing. Toss well, then taste and adjust seasoning with more salt, sugar, and lime juice to taste.

Quinoa has a comforting side, and this is it. This hearty recipe from Bon Appétit via Epicurious is full of warm spices and perfect for a cold winter day. The recipe calls for butternut squash, but would be great with any dense orange squash like acorn or kabocha.

Directions: Start making the stew by heating oil in a large saucepan over medium heat.  Add onion; sauté until soft, stirring often, about 5 minutes. Add garlic; stir 1 minute. Mix in all spices from paprika through saffron. Add 1 cup water, tomatoes, and lemon juice. Bring to boil. Add squash and carrots. Cover and simmer over medium-low heat until vegetables are tender, stirring occasionally, about 20 minutes. Season with salt and pepper.

Stir half of cilantro and half of mint into the stew. Spoon quinoa onto platter, forming well in center. Spoon stew into well. Sprinkle remaining herbs over.

Rather than frying up polenta, give quinoa a new home as a crispy, golden cake. This Italian-style quinoa dish from Gourmet via Epicurious uses the binding power of an egg to form quinoa patties for pan-frying; if you’ve made a quinoa-based burger before, you’re halfway there. The lightened caponata-style eggplant ragu on top is deepened by the smokiness of the cheese, but you could substitute normal, unsmoked mozzarella, too.

Directions: To make the quinoa cakes, bring water and ½ teaspoon of salt to a boil in a medium saucepan. Rinse the quinoa well and stir into boiling water. Return to a boil and Simmer until water is totally absorbed, about 20 minutes. Remove from heat and let stand, covered, 5 minutes. Transfer to a large bowl and cool, stirring occasionally, 10 minutes, then stir in egg.

While the quinoa is cooking and chilling, make the ragu. Toss eggplant with 1 teaspoon salt in a colander and drain 30 minutes. Squeeze handfuls of eggplant to extract liquid, then pat dry.

Cook eggplant, onion, garlic, oregano, and ¼ teaspoon each of salt and pepper in oil in a 12-inch heavy skillet over medium heat, covered, stirring occasionally, until softened, about 5 minutes. Stir in tomatoes, roasted peppers, and water and simmer, covered, stirring occasionally, until eggplant is very tender and mixture is thick, about 10 minutes.

When the quinoa has chilled, heat 2 tablespoons of oil in a large skillet over medium heat until it shimmers. Carefully add quinoa cakes and cook, turning once carefully and adding remaining 2 to 3 tablespoons oil, until crisp and golden, 8 to 10 minutes.

Plate the quinoa cakes. Stir parsley and half the cheese into the ragu and stir. Spoon over quinoa cakes, and then sprinkle remaining cheese over the dishes. 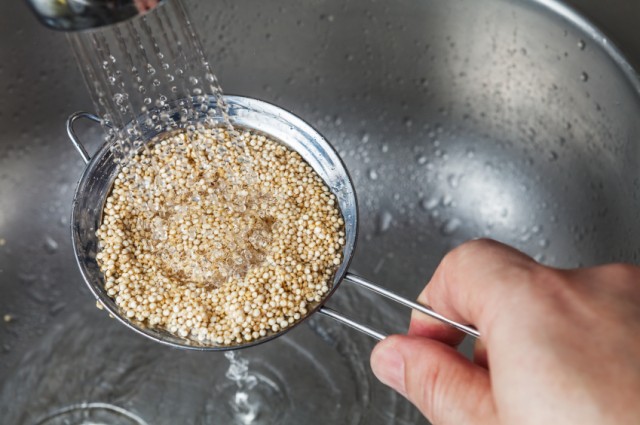 If you have extra quinoa at the end of a meal, use it here. This is a dish that works amazingly well with leftover quinoa because it needs to chill a little in the fridge to keep the grains separate when reheating, one of the defining characteristics of fried rice. This recipe from Cooking For Keeps is a great way to repurpose any leftovers, really; though the recipe lists standard ingredients like peas, you can throw any mish-mash of vegetables that need a new home into the pan.

Directions: Rinse quinoa a few times in cold water. Bring quinoa and water or chicken stock to a boil in a medium saucepan, and then reduce to a simmer. Season with salt.

Simmer for 15 to 20 minutes until quinoa is fluffy and cooked through. Remove from heat and let set for five minutes or so. Fluff with a fork. Cool and store in the fridge until thoroughly chilled.

Mix teriyaki, soy sauce, and sesame oil in a small bowl. Set aside.

As a 2006 recipe, this salad starred quinoa before it was cool. This recipe from Cooking Light via My Recipes features a heartier way to eat a Greek salad in the middle of winter when all the heads of lettuce are sad, wilty, and out of season, and relies on radicchio for some leafy crunch. If you can’t find radicchio, substitute red cabbage.

Directions: Rinse quinoa. Bring broth to a boil in a large saucepan. Stir in quinoa. Cover, reduce heat, and simmer 15 minutes or until liquid is absorbed. Uncover; fluff with a fork. Cool to room temperature. 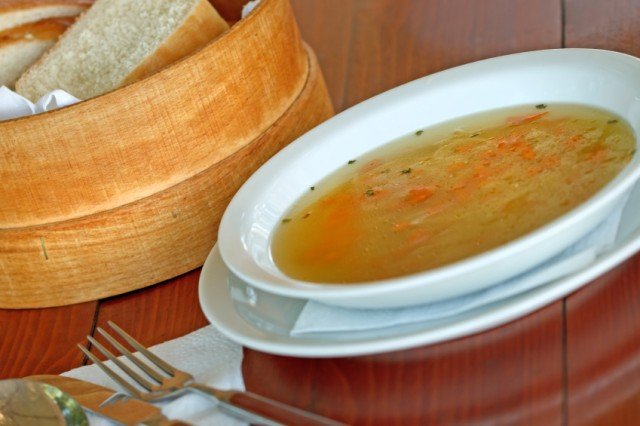 Though it looks a little less sexy than the other recipes listed, this soup is special because it’s a traditional dish from the homeland of quinoa brought back by Bites Out of Life blogger Ishita Singh from a trip to Machu Picchu. It’s light, warm, and herbaceous with the use of oregano and lemon verbena, but still has a little heft to it between the quinoa and potatoes. If you’re looking for a miracle soup, this may be it — and if you’re coming back from a fight with the flu, this could be the soup that puts you back on your feet. Since most supermarkets don’t carry fresh lemon verbena, use cilantro as a good-enough substitute. It’s a completely different flavor, but still works well here.

Directions: In a large pot, heat the olive oil. Add the onion, garlic, ginger, carrots, and celery and saute on medium heat until the onions begin to brown, 7 to 10 minutes. Add the quinoa and toast, stirring often, until the seeds brown slightly, about 5 minutes.

Add the stock, oregano, paprika, salt, pepper, bay leaves, potatoes, and butternut squash. Bring to a boil, then reduce the heat to medium-low. Simmer the soup for 20 to 25 minutes, until the vegetables are fork-tender. Taste and adjust seasonings, then stir in the chopped cilantro and serve.

Stir in quinoa, vegetable broth, beans, tomatoes, corn, chili powder, and cumin; season with salt and pepper, to taste. Bring to a boil; cover, reduce heat, and simmer until quinoa is cooked through, about 20 minutes. Stir in avocado, lime juice and cilantro. 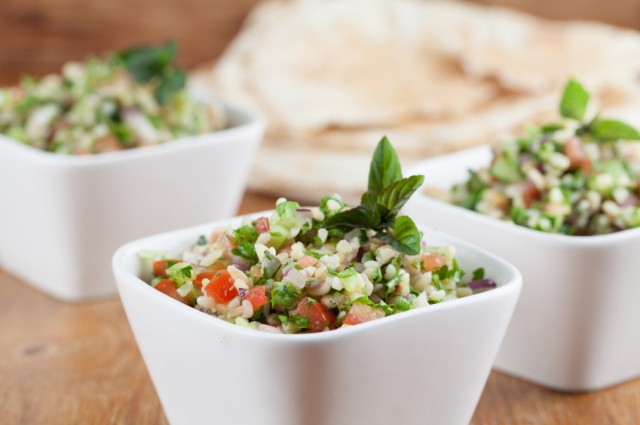 We’re going to assume more of you have quinoa in your cabinet than bulgur, so we’re presenting this classic Middle Eastern grain salad made with the little South American seed instead of bulgur. Even if quinoa isn’t sitting on a shelf in your kitchen, quinoa can be much easier to find at any given grocery store than good quality bulgur, making this Bon Appétit recipe a snap to pull together without roaming the aisles.

Directions: Bring quinoa, ½ teaspoon salt, and 1¼ cups water to a boil in a medium saucepan over high heat. Reduce heat to medium-low, cover, and simmer until quinoa is tender, about 10 minutes. Remove from heat and let stand, covered, for 5 minutes. Fluff with a fork.

Meanwhile, whisk lemon juice and garlic in a small bowl. Gradually whisk in olive oil. Season dressing to taste with salt and pepper.

Add cucumber, tomatoes, herbs, and scallions to bowl with quinoa; toss to coat. Season to taste with salt and pepper. Drizzle remaining dressing over.