Almost one month ago, thirty-two soccer teams headed to Brazil in the hopes of raising the World Cup Trophy. Now, only two remain–and to use the old phrase–Argentina and Germany are so close to victory, they can taste it. On Sunday, the world will have a new champion who will reign for the next four years, and that sounds like a great excuse to have a viewing party. But it isn’t all about the final, Brazil and the Netherlands will battle for third place on Saturday, and in honor of all four teams, we’ve picked a recipe that highlights the country’s culture. We added a few other crowd pleasing recipes to to bring you eight dishes worthy of a Colombian goal celebration dance. 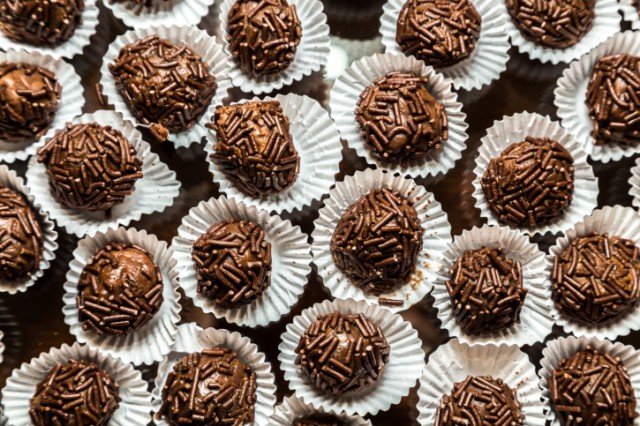 Starting things off on a sweet note are brigadeiro, or Brazilian chocolate truffles. To get your hands on these irresistible bonbons, follow the recipe Blogging Foods provided to Betty Crocker.

Directions: Grease large shallow pan or platter with butter. In 4-quart nonstick heavy saucepan, heat condensed milk, cocoa and 2 tablespoons butter to boiling, stirring constantly with wooden spoon. Reduce heat to medium-low; cook 10 to 15 minutes, stirring constantly, until mixture is thick and shiny and starts to pull away from bottom and side of saucepan when pan is tilted. Pour mixture into shallow pan; cool completely (refrigerate to firm up faster).

Place remaining ingredients in separate small bowls. Use teaspoon or melon baller to scoop truffle mixture, then use greased hands to shape into 1- to 1½-inch balls. Roll each ball in pistachios, almonds, coconut or sprinkles. Place in mini paper baking cups. Store tightly covered at room temperature up to two days or in the refrigerator up to 1 week. 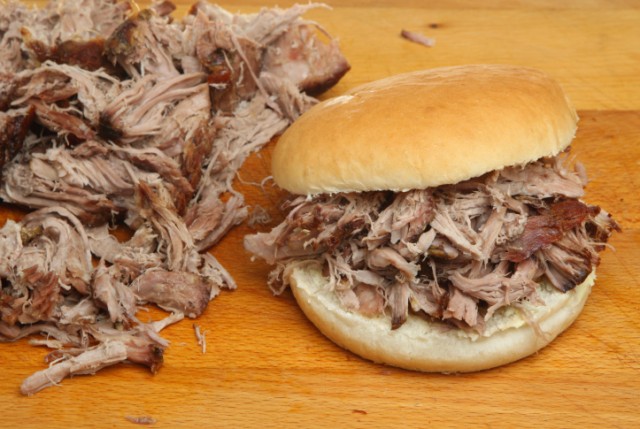 Germans take their beer seriously. In 2013, brewers in the Deutschland even applied for the now defunct Bavarian Purity Law to be protected as a UNESCO World Cultural Treasure, German Missions in the United States explains. The law, which took effect in 1516, regulated how beer was made in Germany for centuries. As you watch the Germans take on Argentina, grab a few German beers for drinking, and cooking with Chow‘s beer-braised pulled pork, which yields eight to ten servings.

Directions: Heat the oven to 300 degrees Fahrenheit and arrange a rack in the middle. Place salt, chili powder, and cinnamon in a small bowl and stir to combine. Coat pork butt with 1 tablespoon of the vegetable oil, then coat all sides with all of the spice mixture. Let sit at room temperature for 30 minutes. Heat remaining 1 tablespoon oil over medium-high heat in a Dutch oven or a large, heavy-bottomed pot with a tightfitting lid until just starting to smoke, about 5 minutes. Add pork and brown on all sides, about 15 minutes total. Remove pork to a plate and discard all but 1 tablespoon of the fat in the pot.

Reduce heat to medium and add garlic, chiles, and onions. Cook, scraping up any browned bits from the bottom of the pot, until softened, about 15 minutes. Increase heat to medium high, add reserved pork and beer, and bring to a boil. Cover, transfer to the oven, and cook until pork is tender and falls apart when shredded with a fork, about 3 hours.

Place a large strainer in a large bowl and pour the contents of the pot into the strainer, reserving the liquid. Place pork and strained solids back in the pot and shred pork with two forks, removing any large pieces of fat. Measure 3 cups of the reserved braising liquid (you may not need all of it). Use a fat separator to remove the fat from the liquid until you have 1 cup. (Alternatively, let the pork and braising liquid cool, then refrigerate both overnight or until the fat solidifies on the surface of the liquid. Once the fat has formed a hard layer, scrape it off and discard.) Add liquid to the pot and stir to combine. Add cider vinegar and stir to combine.

The Germans aren’t the only ones with close ties to beer. The Dutch have a their own traditions with beer, and several widely available brews over here in the States. For a Dutch-inspired drink, try Giada de Laurentiis’s take on the shandy. Lemonade is replaced with sparkling apple cider for an adult beverage that serves four to six people.

Directions: Slowly pour the beer into a 10-cup capacity pitcher and slowly add the sparkling cider. Pour the shandy into frosted glasses and serve immediately.

It doesn’t have to be all about the countries and teams playing. Any game day party needs great appetizers, and the spinach artichoke potato skins from Rachel Ray are just that. It yields around six to eight appetizer or snack-sized servings.

Directions: Pre-heat the oven to 400 degrees Fahrenheit. Place the potatoes on a baking sheet and roast until tender, about 25-30 minutes. Remove and set aside until cool enough to touch. Cut each potato in half and scoop the insides out into a medium size mixing bowl. Place the skins, cut-sides up, back onto the baking sheet.

With a small spoon, scoop the spinach-artichoke potatoes into the little potato skins. Top with the remaining Parmigiano and cheddar, and place back in the oven until the cheese is lightly browned, about 10 minutes.

Take advantage of the Sunday afternoon time-slot for the final to do a little weekend grilling. During an Argentinian themed show on Food Network, Bob Blumer made these steaks, served with chimichurri sauce. The origins of chimichurri remain murky at best. SFGate explains the various tales surrounding the sauce’s history. Miguel Brascó says it came from British prisoners in Argentina mixing languages, while others say it came from mispronunciations of Jimmy Churry, or Jimmy McCurry, a meat vendor. Regardless of how it came to be, chimichurri is a delicious way to flavor foods, and you can also serve this classic Argentinian condiment with fish or chicken.

Directions: Preheat a grill. Place all chimichurri sauce ingredients in a blender or food processor and pulse until well chopped, but not pureed. Reserve. Dissolve cayenne pepper and salt in 1 cup hot water. Transfer to a squeeze container.

Place the steak directly over a hot grill, baste with the chimichurri grilling sauce, and grill until the outer portion of the meat reaches the desired degree of doneness. Remove the steak from the grill and slice long strips from the outer edges of the steak. Instruct guests to pick up a steak slice from the cutting board with their fingers, place it on a slice of baguette, and enjoy. Return the remaining steak to the grill, baste, and grill until more of the steak is cooked. Remove and repeat the slicing and serving procedure until steak is consumed. For extra spicy steak, baste 2 or 3 additional times with the cayenne pepper mixture during grilling process. Spoon chimichurri sauce over steak. 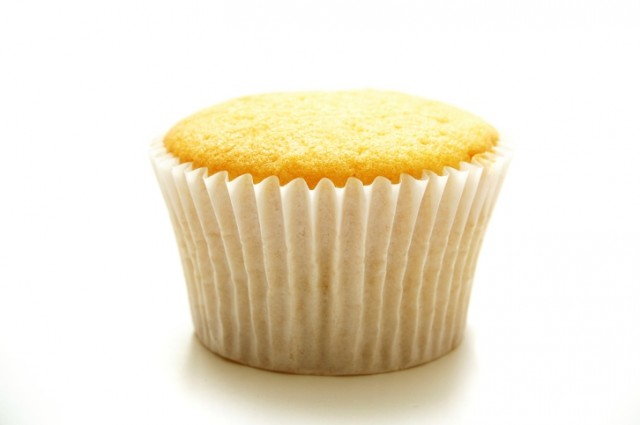 You won’t need fancy fondant skills to create a cake that looks like a soccer ball. First you’ll need a cupcake base, and a basic vanilla buttercream frosting–like these recipes from Taste of Home. You can dye the frosting black, or you can also make a batch of Wilton’s chocolate icing found here. Finally, place your black and white cupcakes into a soccer ball formation using this guide from Dukes and Duchesses. You’ll have around twenty-four cupcakes, and 3 cups worth of vanilla buttercream to work with.

For the vanilla butter cream, in a large bowl, beat butter until creamy. Beat in the confectioners’ sugar, vanilla, and enough milk to achieve desired consistency. Arrange using guide listed above. 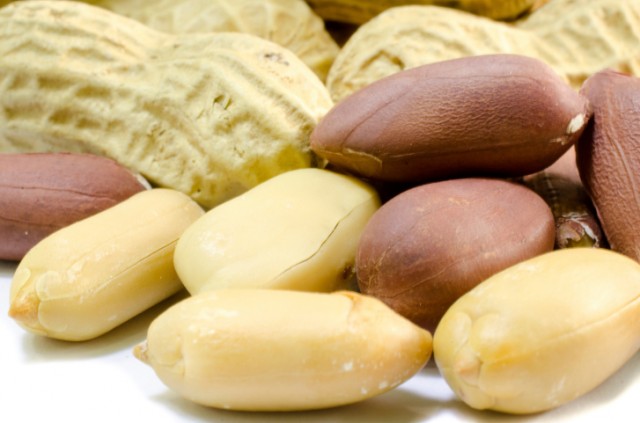 Only occurring every four years, the World Cup Final isn’t your average sporting event, so why celebrate with your run-of-the-mill hummus? Mix it up a bit by using boiled peanuts and Bon Appetit‘s recipe for a memorable dip.

Directions: Put boiled peanuts, tahini, lemon juice, cumin, cayenne, and garlic in a food processor and pulse to combine. With processor running, slowly add oil. Continue puréeing peanut mixture, adding water 1 tablespoon at a time, until the hummus is smooth. Season to taste with salt. Serve with chips or pita. 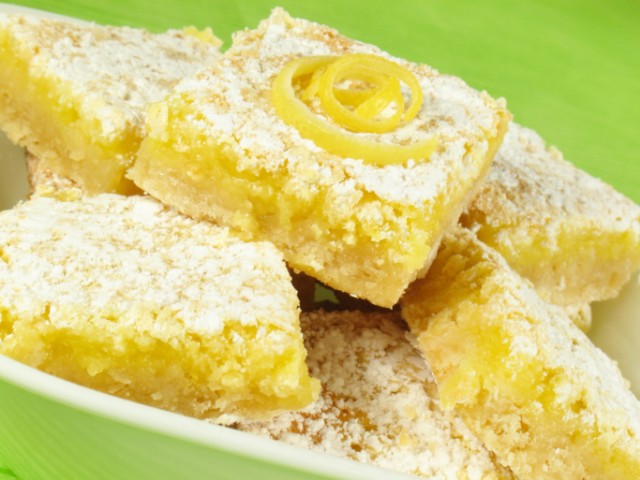 A tray full of tart treats is easy with AllRecipes.com‘s lemon bars. Baked in a 9 X 13 pan, you’ll be able to cut plenty of lemony squares. Easy to make, and even easier to eat, you won’t have any left after 90 minutes have been played.

Directions: Preheat oven to 350 degrees Fahrenheit. In a medium bowl, blend together softened butter, 2 cups flour and ½ cup sugar. Press into the bottom of an ungreased 9 x 13 inch pan. Bake for 15 to 20 minutes in the preheated oven, or until firm and golden. In another bowl, whisk together the remaining 1½ cups sugar and ¼ cup flour. Whisk in the eggs and lemon juice. Pour over the baked crust.

Bake for an additional 20 minutes in the preheated oven. The bars will firm up as they cool. For a festive tray, make another pan using limes instead of lemons and adding a drop of green food coloring to give a very pale green. After both pans have cooled, cut into uniform 2-inch squares.