Bracket busted? After you take comfort in knowing you aren’t alone and drown your sorrows with a beer-based cocktail, it is time to get ready for the Final Four. Rather than prepping for the end of March Madness by talking about players and coaches, pick the more appetizing option and take an eight-recipe tour of the remaining four states. This is only a small sampling of dishes hailing from the remaining four teams’ home states, but each of the eight will have you counting down the days to the weekend — even if your team made an early round exit. 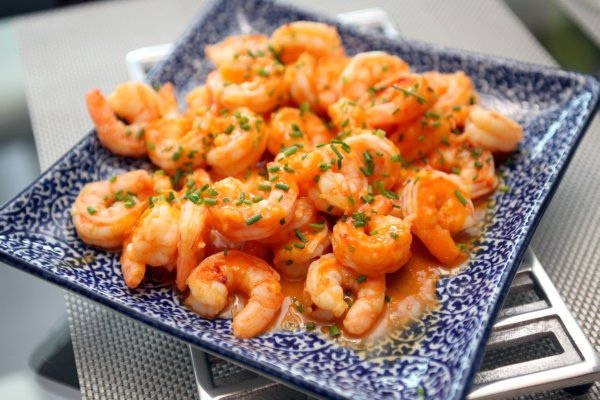 Gator isn’t just part of part of the University of Florida’s legacy, the animal is tied to the state’s culinary traditions too. Since gator isn’t exactly an accessible ingredient for most people, take two of Florida’s other flavors on: oranges and shrimp. Seafood plays a large role in Florida food, and visitors to the Sunshine State can sample crab, lobster, pompano, and a variety of other fish. But it’s a shrimp with an orange glaze from Florida Magazine that you need to try to experience a taste of the state.

No discussion of Florida food could be complete without Key Lime Pie. There are countless takes on the dessert, with ways to incorporate it into cheesecakes, bars, and cookies. For a pie with a simple homemade graham cracker crust, try this one from Emeril Lagasse.

Directions: Preheat the oven to 375 degrees Fahrenheit. In a bowl, mix the graham cracker crumbs, sugar, and butter with your hands. Press the mixture firmly into a 9-inch pie pan, and bake until brown, about 20 minutes. Remove from the oven and allow to cool to room temperature before filling.

Lower the oven temperature to 325 degrees Fahrenheit. In a separate bowl, combine the condensed milk, lime juice, and eggs. Whisk until well blended and place the filling in the cooled pie shell. Bake in the oven for 15 minutes and allow to chill in the refrigerator for at least 2 hours. Once chilled, combine the sour cream and powdered sugar and spread over the top of the pie using a spatula. Sprinkle the lime zest as a garnish on top of the sour cream and serve chilled. 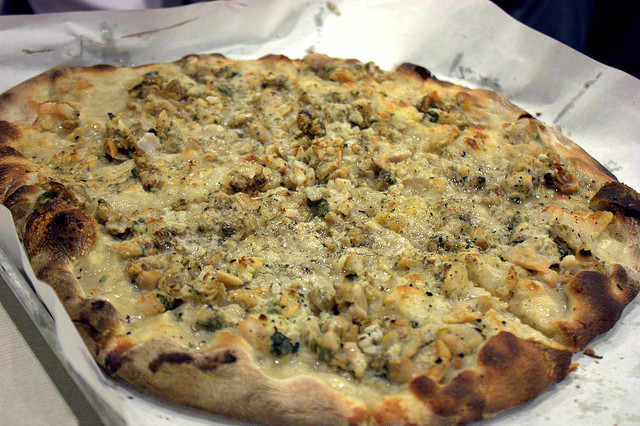 Pizza is already considered a game-day menu staple, and with a New Haven Style pizza, you can have a slice of Connecticut as you watch the Huskies take on the Gators. As Yankee Magazine explains, New Haven residents aren’t starved for options when it comes to places serving this ultra-thin crust pizza. Frank Pepe Pizzeria Napoletana, and Sally’s Apizza are located just blocks from each other, and both serve versions of a pizza inspired by the traditions of Naples, Italy. A white clam pizza is specifically associated with the area, and you can try Amazing Ribs‘ take.

Directions: Preheat the grill or oven to at least 450 degrees Fahrenheit. If you can get it hotter, do. If you are using a stone, put it into the cold oven and let it heat at least 30 minutes. You can use a frozen dough from the grocer, just not a precooked dough, or try making your own.

Toss the flour on your work surface and spread it thin. Place the dough in the center and begin working it outward and roll it thin, less than ¼ inch. Move it to a peel if you are cooking on a pizza stone or to an oiled pan, either works fine. Throw some cornmeal on the peel or pan to help the dough slide on and off, and for a bit of flavor.

Pat the clams dry and place them on the dough, spreading them out evenly, and take them to within 1.2 inches of the edge. Then sprinkle on the garlic, then the cheese, then the oregano, and finally drizzle on the oil. The oil will pool but don’t worry, it will spread out in the oven. I like to take a brush and paint a little oil on the edges of the dough.

Bake for about 30 minutes until the dough on top and the bottom is tan to golden. If you wish, push your luck and let it go until there is a slight blackening on the bottom, but beware, too much char can ruin your pie. Whatever you do, don’t pull the pie until the clams are cooked through. You will notice what looks to be a lot of oil on the surface while it is cooking, but don’t worry, it will be absorbed. You will also notice a strong garlic smell. Remove, slice, and serve.

But if a clam pizza doesn’t sound appealing, Connecticut has another classic game-day fare available: the grinder. Just as New York has the hero, and New Orleans the po’ boy, Connecticut (and New England) has the grinder. Nardelli’s Grinder Shoppe is located in Waterbury, Connecticut, and shared its Italian Combo Grinder with Rachel Ray.

Directions: In a large bowl, combine the bell peppers, cucumber, onion and salad dressing. Let sit for 30 minutes or up to overnight. Drain, reserving the marinade. Halve the bread lengthwise and scoop out the top half. Drizzle both sides with the reserved marinade. 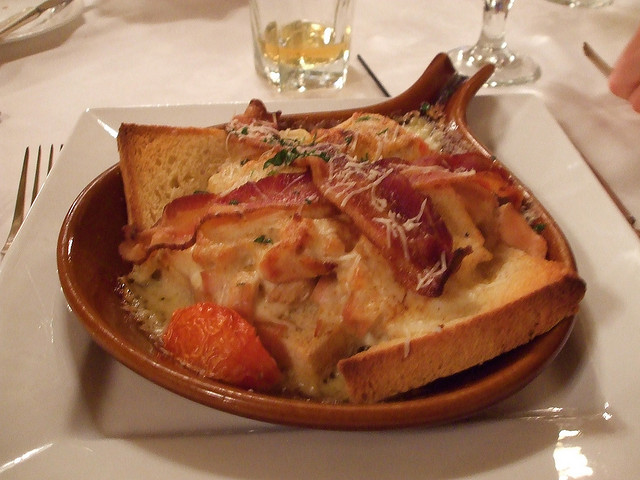 The Kentucky Hot Brown was created in the 1920s at the Brown Hotel in Louisville, but has traveled far and wide since then. Guests flocked to the hotel for a dinner dance, and by the early hours of the morning were famished. The hotel explains that Chef Fred Schmidt wanted a dish that would appeal to the party-going crowd, and went beyond the traditional ham and eggs. As a result, an open-faced turkey sandwich topped with a sauce and bacon was born, which you can now try at home.

Directions: In a two-quart saucepan, melt butter and slowly whisk in flour until combined to form a thick paste or roux. Continue to cook roux for 2 minutes over medium-low heat, stirring frequently. Whisk heavy cream into the roux and cook over medium heat until the cream begins to simmer, about 2-3 minutes. Remove sauce from heat and slowly whisk in Pecorino-Romano cheese until the Mornay sauce is smooth. Add nutmeg, salt and pepper to taste.

For each Hot Brown, place one slice of toast in an oven safe dish and cover with 7 ounces of turkey. Take the two halves of Roma tomato and two toast points and set them alongside the base of turkey and toast. Pour half of the sauce over the dish, completely covering it. Sprinkle with additional cheese. Place entire dish under a broiler until cheese begins to brown and bubble. Remove and cross two pieces of crispy bacon on top. Sprinkle with paprika and parsley and serve immediately. 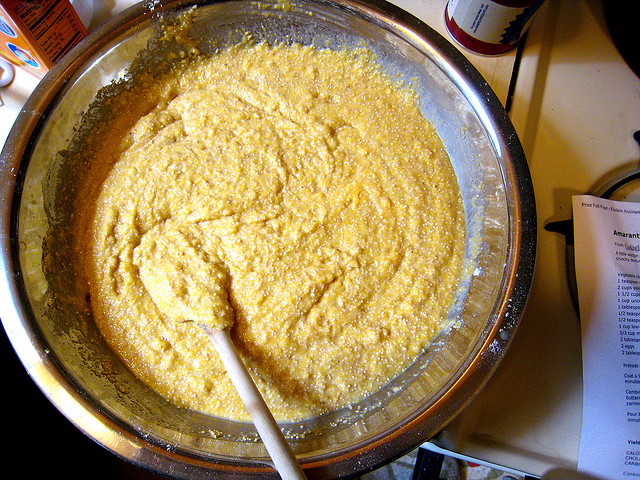 Kentucky can’t take sole responsibility for spoonbread, a dish with Southern roots. A creamy cornbread that will rise like a soufflé, spoonbread is rich, light, and moist. So why is it included in Kentucky-specific foods? Because the Spoonbread Festival takes place in Berea, Kentucky, every year. The Boone Tavern, also in Berea, is well known for its spoonbread, a recipe it shared with Saveur.

Directions: Grease a 9 inch round cake pan with some of the softened butter. Cut out a parchment paper circle to fit inside the pan, nestle it into the bottom, and grease the paper with the remaining softened butter. Set the prepared pan aside.

In a 2-quart saucepan, bring the milk to a boil, whisking occasionally, over high heat. While whisking, pour in the cornmeal in a steady stream. Whisk vigorously to incorporate the cornmeal, for about 1 minute. Remove the pan from the heat and set aside to let the cornmeal mixture cool to room temperature.

Heat oven to 350 degrees Fahrenheit. Transfer the cornmeal mixture to the bowl of a standing mixer fitted with a paddle attachment. Add the remaining butter, baking powder, salt, and eggs and mix on medium speed until uniform and aerated, about 15 minutes. Pour cornmeal batter into the prepared pan and bake until golden brown and puffy and a toothpick inserted in the center comes out clean, about 1 hour and 20 minutes. Serve immediately. 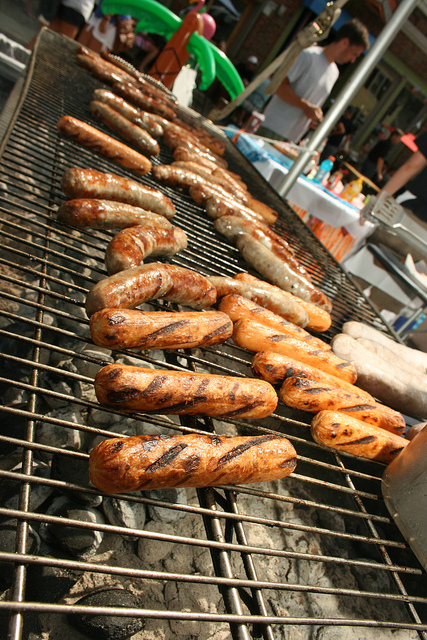 Madison, Wisconsin, is the home of the Badgers, and every year on Memorial Day Weekend, it also hosts Brat Fest. Calling itself the world’s largest Brat Fest, the festival is a celebration of all things bratwurst and giving back to the community. With AllRecipes.com, you can have your own Brat Fest at home, as you prepare for the Badgers facing off against the Wildcats.

Directions: Prick bratwurst with fork to prevent them from exploding as they cook. Place in a large stock pot with the onions, butter, and beer. Place pot over medium heat, and simmer for 15 to 20 minutes. 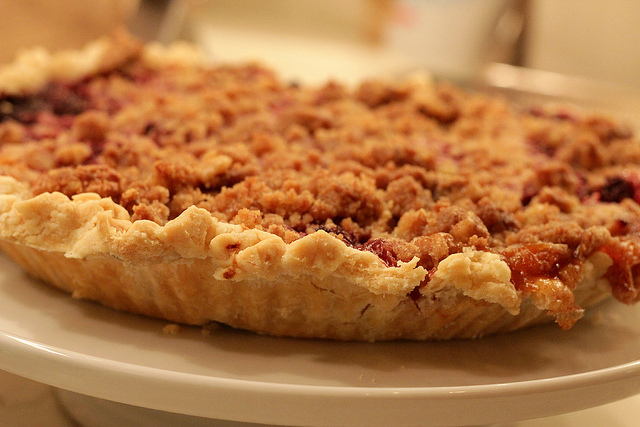 Wisconsin is the top cranberry producing state in the nation according to the Wisconsin State Cranberry Growers Association, providing about 59 percent of the nation’s cranberry supply. The association has plenty of cranberry based recipes worth trying, and here is its take on cranberry pie.

Directions: Preheat oven to 400 degrees Fahrenheit. Combine cranberries, brown sugar and walnuts together. Spread the mixture into the bottom of the prepared pie shell. Beat eggs well; gradually add the sugar; continue beating. Stir in flour and melted butter. Pour batter over the berries in the pie shell. Cover edges of pie crust with foil and bake for 15 minutes. Reduce heat to 350 degrees; remove foil and bake 35 minutes longer. Serve with ice cream.