9 Hot Peppers You Should Know About, Plus 29 Spicy Recipes

Whether you like a little heat or a lot of it, adding the right chile to your dish can make or break it. Heat is like salt; just enough heat will enhance the flavors in your meal, but too much will ruin it. Hot peppers aren’t just about spice, though — they add flavor, too. Instead of sitting down with a notebook, a gallon of milk, and a spread of different peppers, click through this article and save both your tastebuds and your meal.

As a general rule, the smaller the pepper is, the hotter it is. This isn’t always true, but it’s a good heuristic. Capsaicin, the chemical that makes peppers spicy, is present in the spongy white ribs and the seeds. If you can remove this, you’ll reduce the heat your pepper is packing. Some peppers are hot enough to burn your skin if not handled properly, and wearing gloves when working with them is recommended. Casein, a milk protein, does a good job of binding with capsaicin; if you can’t handle the heat, grab some milk.

Peppers are measured on the Scoville Scale in Scoville Heat Units (SHUs), which refers to the number of times the capsaicin would have to be diluted to be undetectable. A bell pepper has no capsaicin, so it has 0 SHUs. A jalapeño averages 5,000 SHUs, so the potency of its capsaicin is such that it would have to be diluted 5,000 times to be as mild as a bell pepper. The spiciest pepper on record right now is the Carolina Reaper, and it averages 1,569,300 SHU with the hottest individual pepper clocking in at 2.2 million SHUs. Pepperscale.com has a good list of hot peppers and their rankings on the Scoville Scale.

Now that you’re equipped with a sense of spiciness, here are 9 hot peppers commonly found in markets and grocery stores. Get to know them, and let them enhance your meals! 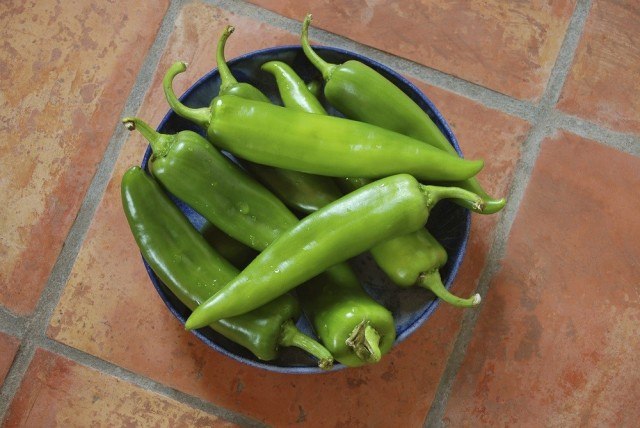 Anaheim chiles belong to the New Mexico chile pepper family. They have a mild flavor similar to a bell pepper but with a slight heat, ranging from 500 to 2,500 SHUs depending on if you’re dealing with a California grown Anaheim (500 to 1,000) or a Hatch Valley, New Mexico grown chile (1,000 to 2,500). Both are typically 6 inches long, 2 inches wide, and start off green but ripen to red. They’re thick walled, making them good for stuffing, but have a tough skin that can become irksome to eat. They’re often charred or roasted to remove the skin, and it comes off quite easily. These and other New Mexico chiles can often be found dried and strung up in ristras all along the American Southwest.

For a primer on roasting batches of chiles, The Pioneer Woman has you covered. Though you can buy canned green chiles, they’re way better freshly roasted.

After you’ve roasted and peeled them, stuff them with cheese and roll them in cornmeal to make The Food Network’s chile rellenos. They’re just as good with fried eggs as they are with tamales.

Use them to make an amazing salsa verde, and then use a crockpot to slowly cook chicken in it until it falls apart into shreds with this recipe from Two Peas and Their Pod.

For a really delicious dip or spread, use 2 roasted chiles, Manchego cheese, and walnuts to make this creamy pesto from Calizona. Serve on everything. 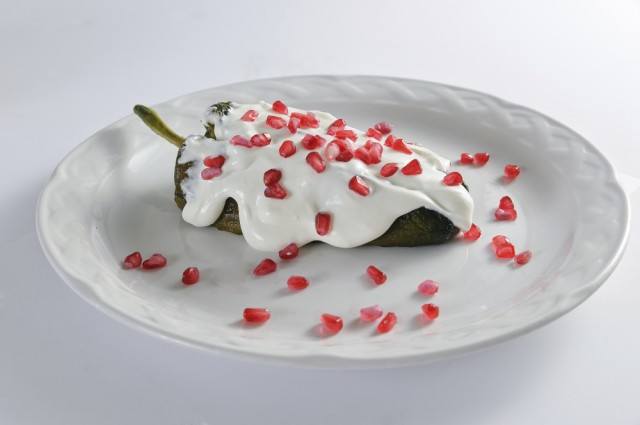 Poblano peppers, with their dark green color and heart-shaped bodies, are also fairly mild with a mysterious rich, kind of smoky, almost fruity flavor behind their exuberant peppery bite (think green bell pepper flavor). Like New Mexico chiles, these peppers are also thick walled but have a much thinner skin. Some poblanos can have as few as 500 SHUs, but it’s much more likely to find them in the 2,000 SHU range.

When dried, poblanos are called ancho chiles. They carry very low heat but have an intense concentration of the rich, smoky, fruity flavors. They make amazing sauces and, along with guajillo chiles, are a staple of mole sauces.

One of the best traditional ways to highlight the flavor of poblanos is to make rajas con crema, or roasted poblanos in cream sauce. As Elise from Simply Recipes points out, they’re amazing served as a side to any Mexican dish or simply with tortillas.

These chiles are great for stuffing, and this recipe from Chow for stuffed poblanos with black beans and cheese really shows that off.

Ancho chiles add a wonderful flavor to this Yucatán pork stew from Food & Wine. The acidity from the lime juice and the smoky sweetness of the anchos make this a phenomenal example of Mexico’s Yucatán Peninsula flavors. 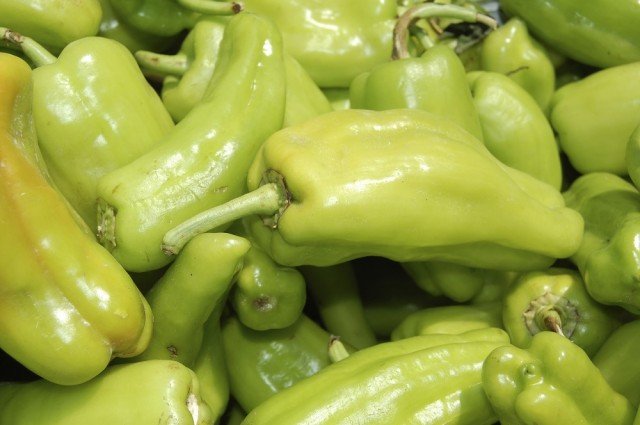 These peppers, yellow before fully ripe, look a lot like the mild banana pepper (500 SHUs) but clock in anywhere between 1,000 and 15,000 SHUs. Unfortunately, they’re hard to tell apart by sight; Hungarian wax peppers have slightly thinner walls and are a bit wider than banana peppers, but a little nibble will tell you the most.

Hungarian wax peppers have a tangy sweetness that persists even under the medium heat of the pepper. It’s most common to see them in stores when they’re still yellow, but they get incredibly hot when allowed to ripen to orange and red.

The tangy sweetness of these peppers lends itself well to every element of The Food Network’s recipe for chili-lime pork tenderloin with wax peppers and corn.

A traditional Hungarian way to use these peppers is to stuff them with cheese and bake them. With this recipe from Suzie’s Farm, you can’t go wrong.

Like most peppers, fresnos start off green, but they’re best when eaten fully ripe and red. They’re conical like a jalapeño, and have a similar taste and heat, averaging 5,000 SHUs. Because they’re left to ripen longer, they can reach 10,000 SHUs, and they’re a touch sweeter. Their thinner walls make them sometimes preferable in fresh salsas.

If you’re looking to venture into the homemade hot sauce world, look no further than this recipe from Bon Appétit. It couldn’t be easier, and it takes full advantage of the clean, sweet heat of this chile.

Fresnos are great on tacos and in ceviches, but this dish of pork shoulder with roasted clams and fresno chiles from Martha Stewart is really exceptional.

Make this roasted corn and fresno chile salsa from Taste Fresno and put it on everything. 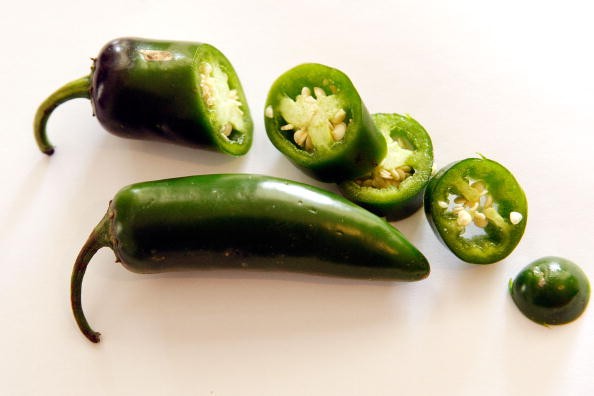 The most popular pepper around, the jalapeño needs little introduction. Its thick, fleshy walls offer plenty of rich distinct peppery flavor, bringing a vegetal note to dishes everywhere. These chiles are great in savory applications, from topping nachos, tacos, and sandwiches to diced and added to sauteed, grilled, or baked dishes. These chiles average about 5,000 SHUs, with younger ones being milder and mature ones hotter.

Dried, smoked jalapeños are chipotle peppers. These are wonderfully smoky and meaty with a fair bit of spice carrying over. These peppers are great in spice rubs and dips.

Jalapeño poppers, of course, must make an appearance, whether it’s the ones stuffed with cream cheese and bacon and wrapped in puff pastry from The Ravenous Couple or these cheddar stuffed and totally deep fried ones from Gourmet via Epicurious.

Jalapeños make great pepper jelly for spreading on cornbread, biscuits, or sandwiches. This recipe from Serious Eats makes plenty of it.

This cheddar jalapeño bread from Gourmet via Epicurious makes a really delicious snack on its own, but it’s really stellar as the foundation of an egg sandwich.

Serranos look a bit like jalapeños, but much skinnier and non-conical. They taste similarly, too, with that rich, vegetal bell pepper flavor, but they’re a bit cleaner and sharper. They’re also much hotter, typically hovering around 25,000 SHUs. Use them anywhere you would use a jalapeño but want more heat.

Use these chiles to make a spice rub paste for chicken quarters marinated in beer in this recipe from The Food Network.

For a lighter use with all the right flavors, make this creamy fresh tomato and serrano soup from Inspiration Kitchen. You could even serve it with the chicken quarters.

The majority of dried red chile flakes you’ll find come from cayenne peppers, the long, thin, and spicy chiles from French Guiana. These piquant peppers are strongly flavored, with tangy, floral, hay-like notes behind the 60,000 SHUs of spice. These chiles are about 6 inches long and have a 1¼ inch diameter, and they tend to be wrinkly. Though they’re often used dried and flaked or powdered, they can be sliced or diced and used fresh to pack a punch of fiery heat.

This chile is a staple in cajun seasoning, appearing in Real Simple’s recipe for blackened salmon and rice. The cayenne powder adds spice, while the paprika adds a sweet, smoky floral quality.

Similarly, this recipe for cajun shrimp and/or crawfish from Steamy Kitchen uses flaked cayenne to add a pungent kick to sweet crustaceans swimming (not literally) in a spicy broth.

The beauty of the flavor of cayenne is that it can easily be paired with chocolate. A pinch of the spicy chile adds a depth to the chocolate that enhances the experience, adding only a little bit of spice on the finish. Try it out in this recipe from The View From Great Island’s cayenne truffles.

There is technically no one Thai chile pepper, but folks in the States are still getting introduced to the various small, hot peppers from the region and don’t really know the difference. The most common type of Thai chile around most of the U.S. is the bird’s eye chile, a 1-inch long and ¼-inch wide smooth pepper in various colors: yellow, green, red, and orange. These chiles have a generally fruity taste and extreme heat, easily packing 150,000 SHUs. These peppers are ideal for sauces and great paired with fish flavors, but also wonderful sliced very thinly on sandwiches.

Sriracha might be made with red serranos now, but it was originally made with red thai chiles. Make your own with this recipe from White on Rice Couple.

On the other hand, if you like a little more sweetness with your heat, you could make a delicious Thai sweet chile sauce like this one from She Simmers.

A classic Thai takeout dish, drunken noodles don’t contain any alcohol — they refer to how much you’ll want to drink to combat the heat of the Thai chiles in there. Make your own with this recipe from Bon Appétit via Epicurious.

This is the hottest pepper readily available in grocery stores across the U.S., holding 100,000 to 500,000 SHUs. Please wear gloves when handling these peppers. Under all that heat, though, is a lovely fruity, floral flavor reminiscent of plum tomatoes and apples. This is why these pretty, lantern-shaped peppers are often featured in fruit salsas containing mango, peach, or pineapple. They’re a much better fit than a more vegetal jalapeño in these applications.

This peach and habanero salsa from Cooking Light via MyRecipes is wonderful served over grilled pork, fish, and chicken.

Don’t let salsas have all the fun! This mango habanero barbecue sauce from Serious Eats is great on barbecued chicken, pork, and beef.

Let the heat of the habanero turn up your peanut sauce for these beef satay skewers from Steamy Kitchen.