9 Recipes That Prove Everything is Better With Bacon

Well, we should probably say that everything is better with bacon, in moderation. Most health officials won’t tell you to fry up bacon to accompany every meal, but they will concede that it won’t harm you too much every now and again. Elaine Magee, MPH, RD, told WebMD that when you do choose pile on the bacon, make it an indulgence with small serving sizes or cut back on other processed meats to keep your diet in balance. In either case, the point was that you can still eat bacon — which we’ve already established makes everything taste better. Try not to make all of the following recipes in one day. 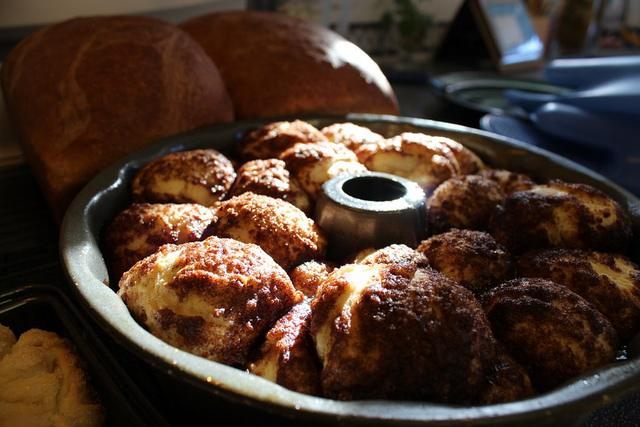 Breakfast, of course, is the most important meal of the day, and if you want something other than your usual eggs, bacon, and toast, the maple bacon monkey bread from AllRecipes.com is an excellent choice. Sweet monkey bread, or pull-apart bread, meets salty bacon for a breakfast or snack that serves sixteen.

Directions: Preheat oven to 350 degrees Fahrenheit. Coat the inside of a 9-inch fluted tube/bundt pan with cooking spray. Place bacon in a large skillet and cook over medium-high heat, turning occasionally, until evenly browned, about 10 minutes. Drain the bacon slices on paper towels; crumble and remove extra fat. Melt margarine in a small saucepan over medium heat; stir in brown sugar and maple syrup. Bring mixture to a boil; cook and stir until mixture begins to foam, about 1 minute. Remove saucepan from heat.

Mix white sugar and cinnamon in a resealable plastic bag; add 6 to 8 biscuit pieces at a time and shake until well coated. Pour any remaining sugar-cinnamon mixture into brown sugar mixture. Place saucepan over medium heat and cook and stir until sugar dissolves, 2 to 3 minutes. Sprinkle ¼ the bacon pieces in the bottom of the tube pan; pour in about ¼ the brown sugar mixture. Arrange one layer of biscuit pieces in the tube pan; sprinkle in ¼ the bacon pieces.

Drizzle about ¼ the brown sugar mixture over the biscuit pieces. Continue layering until all the ingredients are used, ending with a drizzle of brown sugar mixture. Bake in the preheated oven until biscuits are cooked through, about 35 minutes. Allow to cool in pan, 10 to 20 minutes; invert onto a serving plate. 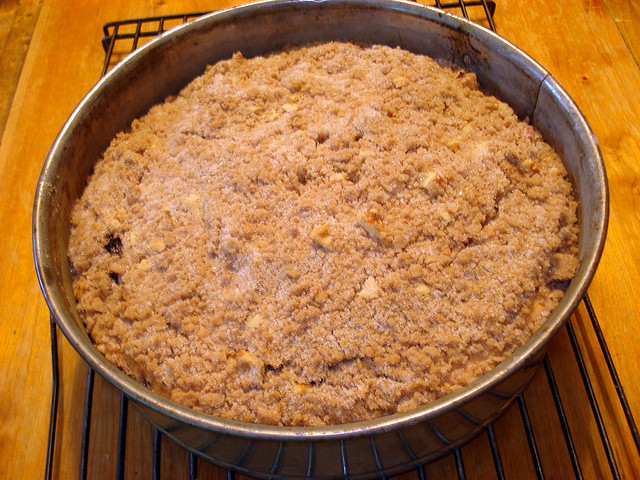 The salty-sweet flavor combinations are endless with bacon, so we had to feature another breakfast with the pairing. This time, it is a coffee cake that pairs butterscotch with bacon from Betty Crocker and Annalise Sandberg. You can substitute semi-sweet chocolate chips for butterscotch or do a mixture of half-and-half.

Directions: Heat oven to 375 degrees Fahrenheit. Spray 9-inch cake pan, or springform pan with cooking spray. Cook bacon in skillet until browned and fat is rendered, about 5 minutes. Remove bacon with slotted spoon, and place on paper towel to drain.

In large bowl, mix 2 cups Bisquick mix, the granulated sugar and baking soda. Add buttermilk and egg, and mix until just combined. Fold in the butterscotch chips and cooked bacon. To make Streusel, in small bowl, mix ⅓ cup Bisquick mix and the brown sugar. Cut in cubed butter until roughly the size of small peas. 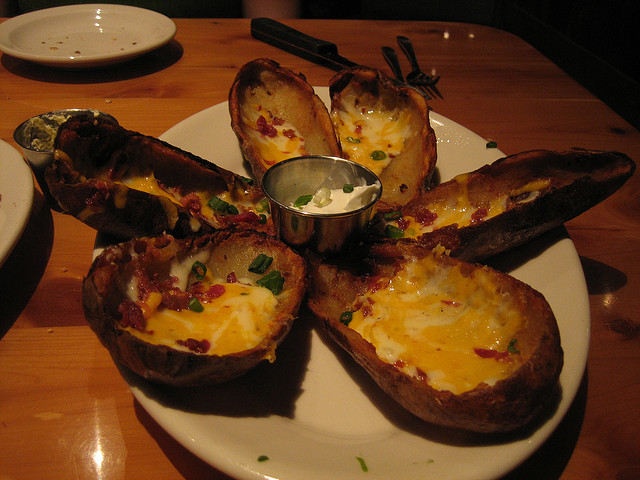 Make Chow‘s basic potato skins for game day, as an appetizer, or just because it is Tuesday and you feel like it. The recipe is easy to follow and will have you preparing a restaurant-worthy dish with sixteen servings in about an hour and a half.

Directions: Heat the oven to 400 degrees Fahrenheit and arrange a rack in the middle. Pierce each potato several times with a fork or sharp knife. Place the potatoes directly on the oven rack and bake until the skins are crisp and a knife easily pierces the potatoes, about 50 minutes. Transfer to a wire rack until cool enough to handle, about 10 minutes. Set the oven to broil.

Slice each potato in half lengthwise. Using a spoon, scoop out the flesh, leaving about 1/4 inch intact; reserve the flesh for another use. Brush the insides of the potatoes with the melted butter and season with salt and pepper. Flip the potatoes over, brush the skin sides with butter, and season with salt and pepper. Evenly space the potato halves skin-side up on a baking sheet and broil until the butter foams and the skins start to crisp, about 2 to 3 minutes (keep a close watch so they don’t burn). Flip the potato halves over and broil until the top edges just start to brown, about 2 to 3 minutes more.

Evenly fill each skin with cheese and crumbled bacon. Place in the broiler and broil until the cheese is melted and bubbling, about 4 to 5 minutes. Remove from the broiler and top each with 1 teaspoon of the sour cream and a sprinkling of the chives. Serve immediately. 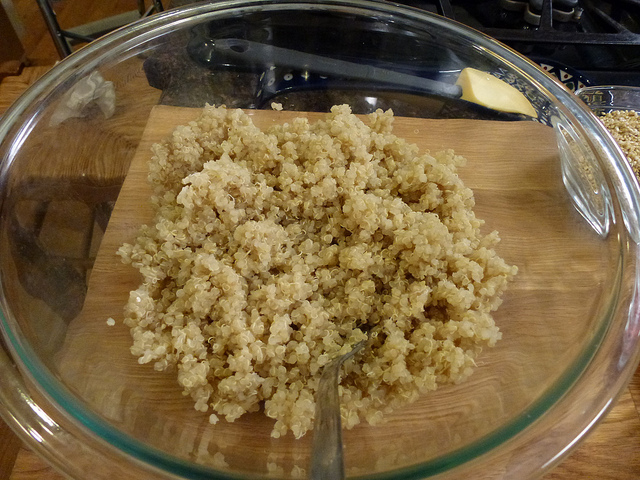 Bruce Sherman, who gave this recipe to Food & Wine, calls quinoa “a miracle food.” While it is unlikely that quinoa can undo any potential health risks posed by bacon, it is good to know that there is at least one healthy component of this dish which serves four.

Directions: Preheat the oven to 350 degrees Fahrenheit. Spread the almonds in a pie plate and toast in the oven until golden brown, 4 minutes; let cool. In a medium saucepan, heat the oil. Add the bacon and cook over moderately high heat until the fat has rendered, about 2 minutes. Add the shallot and cook, stirring a few times, until softened but not browned, about 1 minute. Add the quinoa, stock and sage and bring to a boil. Cover and cook over low heat until the stock has been absorbed, about 17 minutes. Remove the quinoa from the heat and let stand, covered, for 5 minutes. Discard the sage and fluff the quinoa with a fork. Stir in the chives, parsley and toasted almonds. Season the quinoa with salt and pepper and serve. 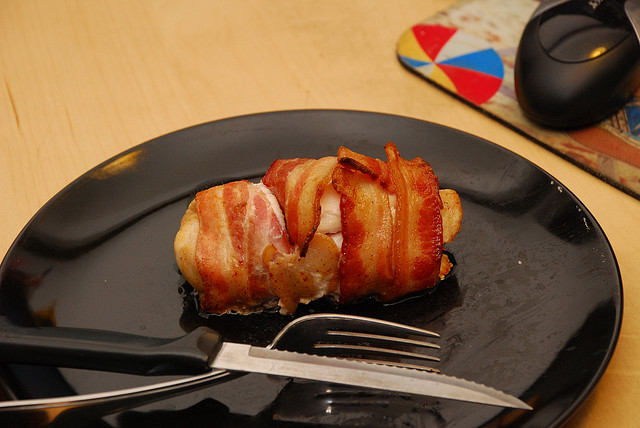 Protein lovers will rejoice over this Taste of Home recipe. You’ll get six servings of chicken wrapped in bacon — but you should probably lay off protein when it comes to the rest of the meal. Try serving the dish with a side of grilled vegetables or salad.

Directions: Preheat oven to 400 degrees Fahrenheit. Flatten chicken to ½-inch thickness. Spread 3 tablespoons cream cheese over each. Dot with butter and sprinkle with salt; roll up. Wrap each with bacon strip. Place, seam side down in a greased 13 x 9 baking pan. Bake, uncovered, for 35 to 40 minutes or until a thermometer reads 170 degrees Fahrenheit. Broil 6 inches from the heat for 5 minutes or until bacon is crisp.

Protein lovers are getting another shoutout, but this one is a bit of a surprise. Instead of the bacon covering up the second meat component, in Tyler Florence’s burgers for Food Network, there is bacon waiting for you in the burger.

Directions: Combine the jack cheese and chopped bacon in a bowl. Put the beef in another bowl and season with salt and pepper; use a rubber spatula to mix it in. Flatten ¼ of the meat mixture in the palm of your hand. Squeeze together about a tablespoon of the cheese and bacon mixture to make a little nugget; put it in the center of the ground beef. Bring up the sides of the patty over the filling, making sure the cheese is completely covered by the meat. Flatten slightly for a nice patty shape. Set them side by side on a platter in the refrigerator while preparing the grill.

Place a large grill pan on 2 burners over medium-high heat or preheat an outdoor gas or charcoal barbecue and get it very hot. Brush the grates with oil to keep the burgers from sticking. Grill the burgers for 8 minutes per side for medium. (Cook ground beef until it is no longer pink, and the internal temperature is 160 degrees Fahrenheit) Remove the burgers to a clean side plate while you toast the buns.

Rub the grill rack with more oil and place the buns cut-side down, toast for 1 minute. Serve the burgers with your favorite condiment and any garnish you like, such as lettuce, sliced tomato, onion, and/or avocado. 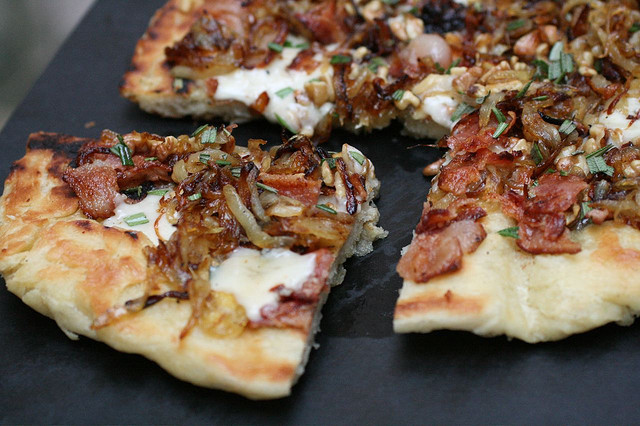 In the original Cooking Light recipe, you’ll find the ingredients and instructions for making pizza dough — but in this instance, we prefer the simplicity of using a pre-made pizza crust. It cuts down on the prep time, meaning you get to enjoy a pizza with bacon more quickly. In the original, the dough is rolled out to form a 12-inch crust.

Preheat oven to 475 degrees Fahrenheit, or to the temperature directed for your pizza dough. Roll dough into a 12-inch circle on a floured surface. Place dough on a 12-inch pizza pan or baking sheet coated with cooking spray and sprinkled with cornmeal. Crimp edges of dough with fingers to form a rim. Spread milk mixture evenly over dough; top with spinach and onion. Bake for 20 minutes (or per instructions). Sprinkle evenly with bacon and cheese; bake an additional 5 minutes or until golden brown. Cut pizza into eight wedges. 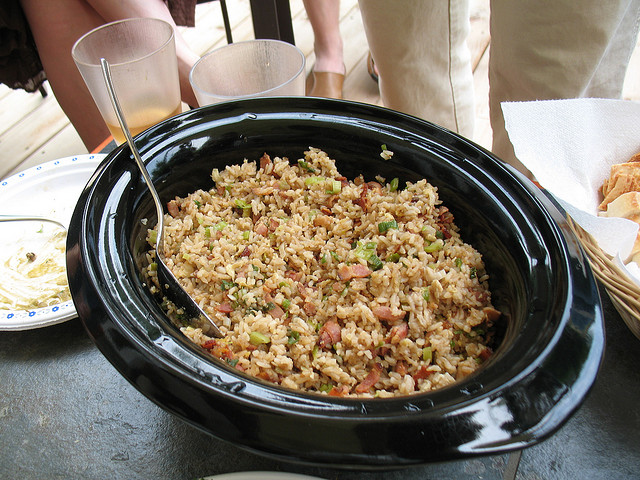 Fine Cooking‘s fried rice not only brings home the bacon, but it also finds a use for any broccoli stalks you might have in the fridge. If you are fresh out of those, you can throw in just about any other vegetable you have lying around — like peas, bean sprouts, asparagus, or mushrooms — or even skip it entirely. The recipe serves four.

Make a 3-inch well in the center of the rice mixture. Add the remaining 1 teaspoon oil, then the eggs, and cook, stirring, until the eggs are almost fully scrambled. Stir the eggs into the rice mixture. Stir in the soy sauce and serve. 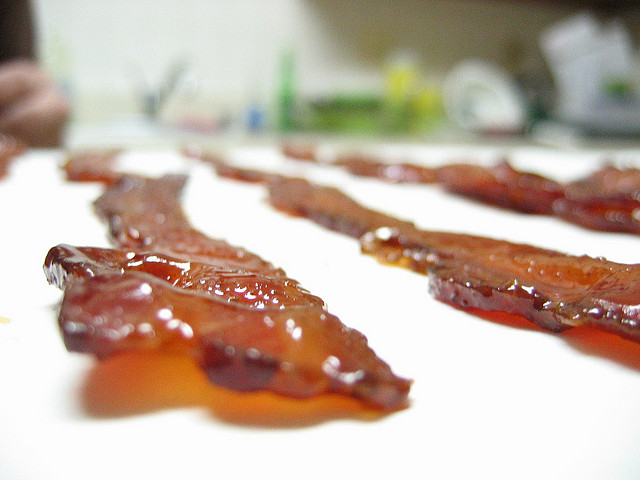 When you need to satisfy a bacon-craving sweet tooth, make pig candy from Patio Daddio BBQ. Highly addictive, pig candy is bacon that is coated in a brown sugar glaze that caramelizes as it bakes. Once you’ve had it, you’ll wonder why it took you so long to try it.

Directions: Preheat your oven to 375 degrees Fahrenheit. Mix the syrup and cayenne well in a small bowl and set aside. Coat both sides of each bacon slice generously with brown sugar. Arrange the bacon on a wire rack inside a sheet pan lined with parchment paper.

Bake in the center position until the sugar is starting to caramelize and the bacon just starts to crisp around the edges. This should take about 15 minutes, depending on the thickness of your bacon. Brush each slice with the syrup and bake another five minutes. Flip the bacon over and brush the other side with the syrup.

Bake until the bacon reaches your desired doneness. Remove from the oven and let sit five minutes before eating.