10 Iconic Foods That America Is Most Famous For

Feeling patriotic? If not now, then you soon will be. There’s nothing like a heaping, greasy, and preferably processed glob of Americana to remind you of your roots. From savory staples to classic confections, America’s got something delicious for everyone — well, everyone who isn’t on a diet. Then again, every diet has its cheat day, and there’s nothing in the rules about salivating over yummy looking pictures. Loosen your belt a few notches and take a tour through ten of the most quintessentially American treats. 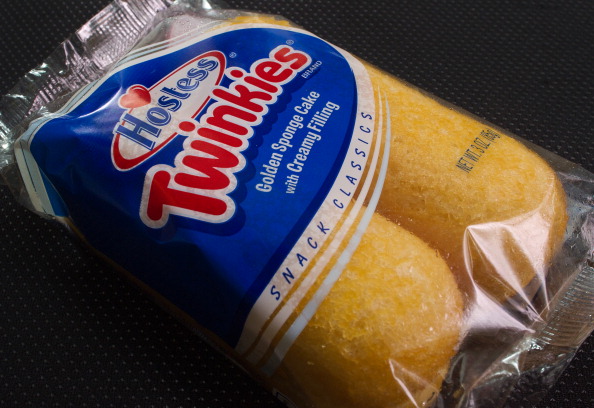 You may know these as the super synthetic, likely non-biodegradable cake snacks — the ones with a shelf life spanning years, if not decades (okay, maybe just 45 days.) According to Hostess Cakes, the goodie was invented by bakery manager Jimmy Dewer in 1930. En route to giving a presentation on his idea, Dewer saw a billboard for Twinkle Toe Shoes. With that, the adorable name — and the tasty treat to go with it — was born. 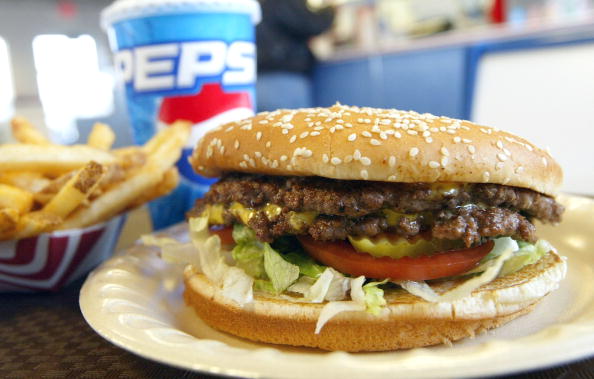 This is about as American as it gets. The concept of the hamburger originated sometime in the late 19th century, according to the L.A. Times. As the dish began to increase in popularity in the 1920s and 1930s, cheese seemed like a natural next step. The origins are widely disputed — of course they are — because who wouldn’t want to be credited with the cheeseburger that started it all? Nowadays, Americans eat nearly 50 billion burgers a year, according to The Huffington Post. That figure translates to three burgers a week for every person in the United States! 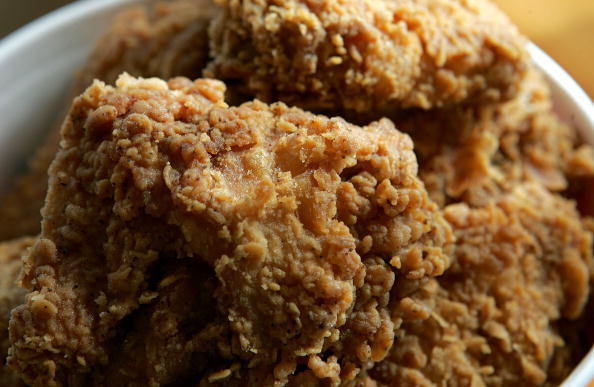 Fried chicken is certainly not unique to the United States, but Americans have adopted the crispy, greasy dish as one of their own. The southern United States, in particular, have taken this dish to new levels — keeping in stride with their reputation for exquisitely indulgent fried-up delights. Try this comfort food alongside a hearty serving of waffles (or waffle fries!) Don’t have a deep frier? You poor sap! Head out to any of the numerous fried chicken chains (ranked here by Thrillist) known so well for this all time comfort food classic. 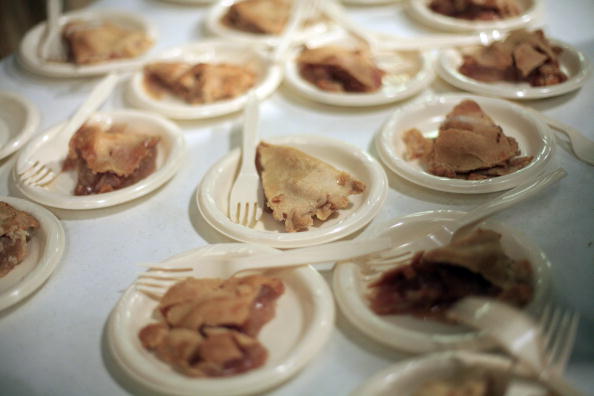 As American as… This one is self-explanatory. Apple pie crossed the Atlantic with the pilgrims and made itself at home in the U.S. According to Parade, “The Pilgrims brought apple spurs with them to the New World; when the trees began producing fruit, apple became one of the most popular pie fillings in early America. Back then, pies were seen as an economical and sustainable food source that helped to fill the stomachs of hungry immigrants.” Delicious and functional — who knew? Better help ourselves to an extra slice. 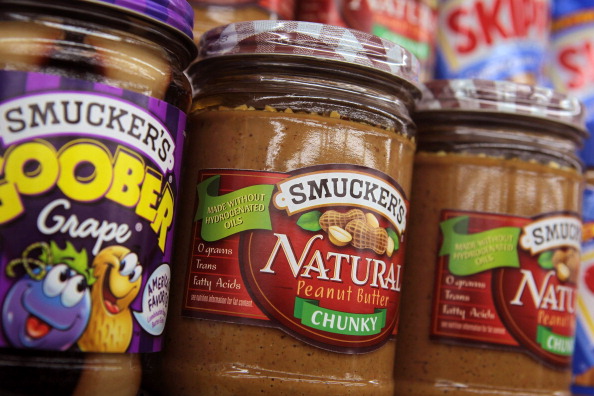 For Americans, peanut butter and jelly sandwiches are as second nature as breathing. According to the National Peanut Board, “the average child will eat 1,500 peanut butter and jelly sandwiches before he/she graduates high school.” Like most culinary staples, it’s hard to pinpoint the origins of the PB&J. What we do know is that, as author Don Voorhees puts it in Why Do Donuts Have Holes?, “the all-American PB&J is little appreciated by the outside world.” Oh, well. More for us! 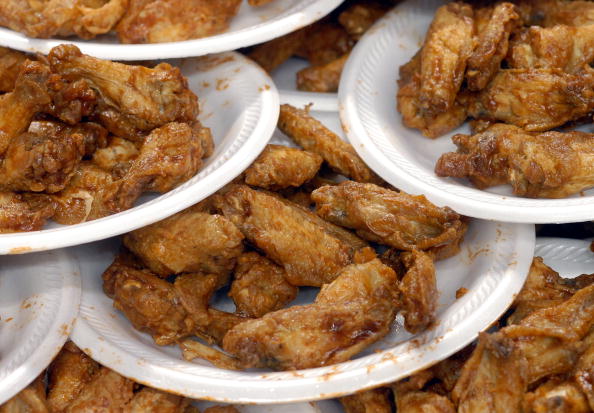 This is yet one more case for the “Unsolved Food Origin Mysteries” pile. No one can really decide where or how these thoroughly messy and delicious wings came to be (Buffalo, New York seems a better wager than many), but they seem to have begun popping up sometime in the 1970s. Nowadays, there are very few American-fare pubs and restaurants you can go to that won’t have a buffalo wings option on hand. Wings have widespread appeal, and are a fun and yummy excuse to revel in your gluttony. The National Chicken Council attests to the dish’s popularity, estimating that over 13.5 billion chicken wings would be sold over the course of the year 2012. During 2012′s Superbowl Weekend alone, the Council estimated that over 1.25 billion wing portions would be consumed. 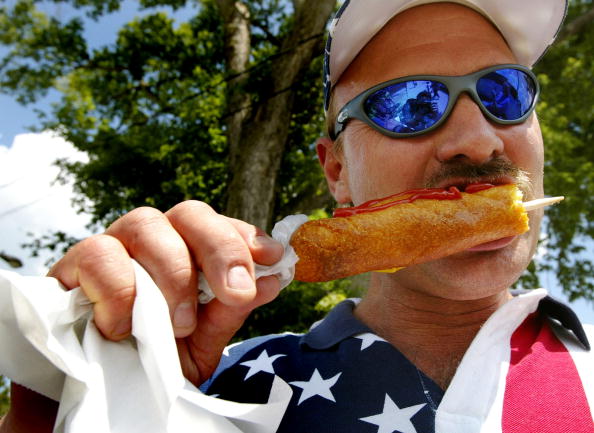 Really anything hot dog-based will do the trick, but corn dogs are one of those county fair staples of middle America that cannot be denied a place here. Whether you like ‘em corned up or not, frankfurters are classically American (the guy above knows what we’re talking about.) Hot dogs go hand-in-hand with barbecues and baseball — two of the great American pasttimes. The National Hot Dog and Sausage council estimates that Americans consume 20 billion hot dogs annually. As for the corn dog spin on things — well, it’s a generally acknowledged fact that everything is better on a stick. 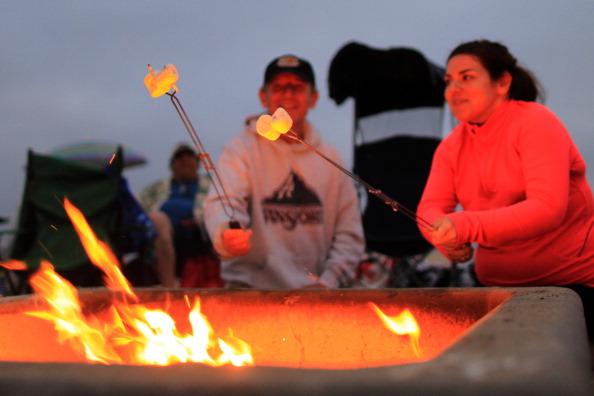 S’mores are a simply and traditional American campfire treat. According to Slate, “The first known s’mores recipe appeared in 1927 in the Girl Scouts handbook Tramping and Trailing With the Girl Scouts.” Speaking on behalf of everyone who’s ever sat around a campfire, we are forever grateful that it did. 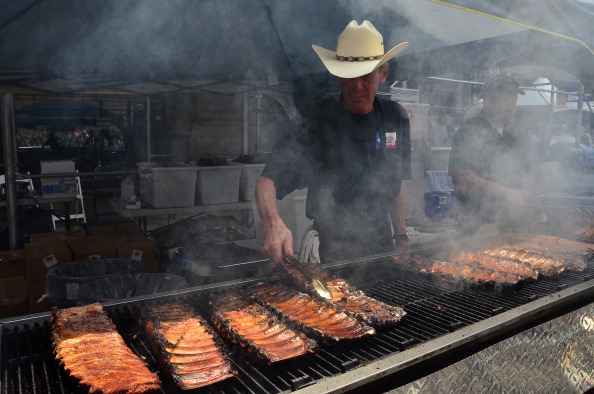 According to Time, barbecue is “just about as red, white, and blue as American cuisine gets,” and rightly so! Time notes that barbecue seems to have originated with Spanish settlers in the United States, and that, “By the 19th century, the culinary technique was well established in the American South … because pigs were prevalent in the region, pork became the primary meat at barbecues.” Ribs are yet another delicious reason to get your hands (and face) dirty. Ribs — generally of a pork base — are grilled to the point of tenderness and soaked in various barbecue sauces (or rubs) to give them that one-of-the-kind flavor. 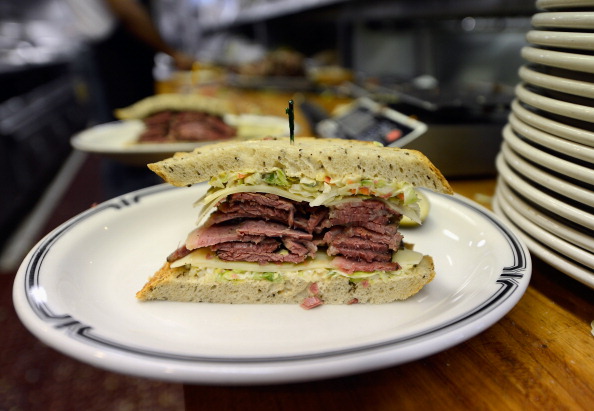