Americans Consume 23 Sticks of Butter a Year: Is the Habit Healthy? 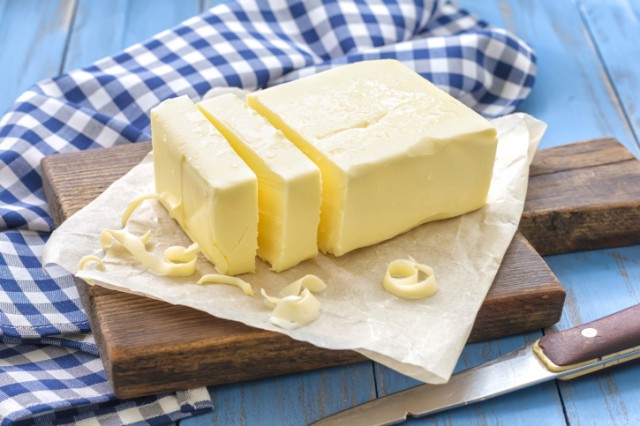 For ages, health experts and doctors have advised against consuming too much butter as it allegedly increases the risk of heart problems and other health issues, including ovarian cancer in women. Healthy consumers opted for supplement products by using “I Can’t Believe It’s Not Butter” instead of the real deal for spreads and cooking with olive oil instead. The fear of butter became so rampant that the overall butter intake saw a decline for years.

But now the Wall Street Journal is reporting, based on U.S. government data, that butter intake is on a rise, as the average American consumes 23 sticks of butter a year. (While 23 sticks is a shocking amount of butter, TIME magazine notes that in the 1920s, Americans consumed a whopping 72 sticks a year.) In fact, the Journal reveals that the annual intake of butter by Americans is around 892,000 total tons and the last time such numbers were seen was World War II.

This year’s butter intake marks the third consecutive year that Americans purchased more butter than margarine, creating the $2 billion butter industry. As for why this change is being seen, experts believe it has something to do with butter-rich recipes on cooking shows and the new image of butter being a simple product.

And according to the most recent research, the image makeover for butter may be long overdue. Earlier this year, scientists published a study, in the journal Annals of Internal Medicine, stating that their study did not find a link between heart disease and saturated fat (the kind of fat found in butter) consumption. What’s more, the study did not find any health benefits (translation: reduced risk of heart conditions) from other kinds of fats, namely monounsaturated fats like olive oil. The researchers did; however, find an association between trans fat (which can be found in processed foods) and heart disease.

“The tip of this iceberg has been visible for years, and we’re finally beginning to see the base,” wrote Mark Bittman in his New York Times op-ed piece. “Of course, no study is perfect and few are definitive. But the real villains in our diet — sugar and ultra-processed foods — are becoming increasingly apparent. You can go back to eating butter, if you haven’t already. This doesn’t mean you abandon fruit for beef and cheese; you just abandon fake food for real food, and in that category of real food you can include good meat and dairy. I would argue, however, that you might not include most industrially produced animal products; stand by.”

Before you go out and buy a lifetime supply of butter, you should know that scientists still recommend moderation when consuming saturated fats. And then there’s the fact that the controversial saturated fats study may have loopholes — although the study’s author stands by his findings. Ultimately, it seems that no number of studies have been able to give a finalized verdict on whether or not butter is safe to eat on a daily basis. And since the jury is still out, play it safe by eating butter in moderation and know that the American Heart Association recommends that saturated fats be no more than 5 to 6 percent of your total caloric intake.