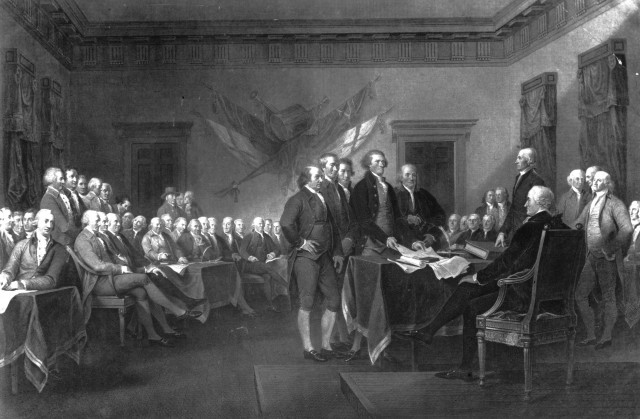 Having ice cream at your Fourth of July bash? Or are you more inclined to pop open a beer? Either choice will be true to the roots of our country, and were favorites with the Founding Fathers. In between penning the Declaration of Independence, leading the Continental Army, and serving in Congress — in other words, founding the country — America’s first leaders had to find time to eat. Exploring the history that binds the founding fathers to food leads to discovering the foodie past of some of most prominent men in early America, and the impact food and drink had on crafting their public image.

With recipes for haricot verts, ice cream, as well as meringues and macarons among his papers, Thomas Jefferson is one of the top foodies of the Founding Fathers. With his usual flair for all things French, Jefferson wasn’t exclusively influenced by Francophile feelings. Also nestled in his papers is evidence that Jefferson had “mould for making macaroni,” picked up by Jefferson’s secretary William Short in Naples, Italy. The Thomas Jefferson Encyclopedia‘s page on the machine, found on Monticello’s website, details that Jefferson also had notes about pasta making in Naples, and his own recipe for macaroni.

Not everyone who visited Jefferson’s White House enjoyed the pasta machine’s creations. “Dinner not as elegant as when we dined before,” Reverend Cutler recorded in his journal. “[Among other dishes] a pie called macaroni, which appeared to be a rich crust filled with the strillions of onions, or shallots, which I took it to be, tasted very strong, and not agreeable.”

Jefferson’s style when entertaining impacted another pair of Americans, the Madisons. James Madison served as Jefferson’s Secretary of State in the early 1800s, and his wife, Dolley, often served as a hostess for the President. The First Ladies Library notes that aiding the widowed Jefferson was crucial for Madison’s development as a hostess and public figure. In James Madison, Richard Brookhiser categorizes the entertaining that took place under the Madison administration as even grander than what guests experienced in the Jefferson White House.

In another expansion of Jeffersonian traits, Madison is credited with popularizing ice cream — but probably wasn’t the first to serve the dessert to diplomats and persons visiting the president. That dessert wouldn’t be the only dish drawing attention from guests. Her layer cake remains famous to this day, and you can make an updated version yourself for a bit of Madison-style entertaining. What you probably won’t be able to provide is a waiter for each guests, a feature of Dolley’s parties according to Colonial Virginia’s Cooking Dynasty, by Katharine E. Harbury. Along with cakes and ice creams, oysters, ham, potatoes, beets, puddings, and pies ended up on the table during Madison’s presidency.

Mount Vernon and the Washington’s have a the reputation for large meals, but this doesn’t taint George Washington’s image of being a man of the people. Had you visited the Washingtons, the Mount Vernon Estate says you would have enjoyed three full meals, a breakfast at 7 a.m., dinner at 3 p.m., tea at 6 p.m., and possibly a fourth meal — a light supper at 9 p.m. A bevy of beverages would have been available at each, including top wines, Philadelphia porter, hard cider, malted liquors, and beer.

A picture of George Washington’s diet can emerge from what historians at Mount Vernon have uncovered about what his wife, Martha Washington owned and baked. It is known that Martha had a copy of Hannah Glasse’s The Art of Cookery, Made Plain and Easy, which was published in 1774, and included recipes for anything and everything under the sun.

If you wanted to know how to roast meat, make different dressings and sauces, or bake the perfect pie during the Revolution, this was your go-to source.  It even had an apple pie recipe, a dessert that may have been served at Mount Vernon. We do know that Martha Washington had a recipe for “Great Cake” because it was preserved by her granddaughter, Martha Parke Custis, for other family members. Flavored with spices, brandy, Madeira wine, and citrus peel, the cake may or may not have been iced, and you can try a Great Cake modernized to current measuring standards thanks to this recipe.

The Washingtons weren’t the only ones who had a bottle or two of Madeira on the shelf or a connection to the Portuguese wine. In 1768, John Hancock was accused of smuggling Madeira into the country on the sloop Liberty. The Massachusetts Historical Society says it is likely Hancock was involved in this common tax avoiding practice. Innocent or guilty, when the royal governor tried to make an example of Hancock, the plan backfired. By seizing Liberty and accusing Hancock, the governor transformed Hancock into a symbol of English injustice, and gave Madeira an interesting link to an American patriot through what became known as the Liberty affair.

Smuggling goods isn’t likely to be the catalyst for your patriotic and public career these days. For your Independence Day celebrations, stick with the beers, ice creams, and hospitality of the Founding Fathers and their wives when you want experience a bit of America’s foodie past. “My manner of living is plain,” Washington wrote in a letter to a friend. “A glass of wine and a bit of mutton are always ready; and such as will be content to partake of them are always welcome.”