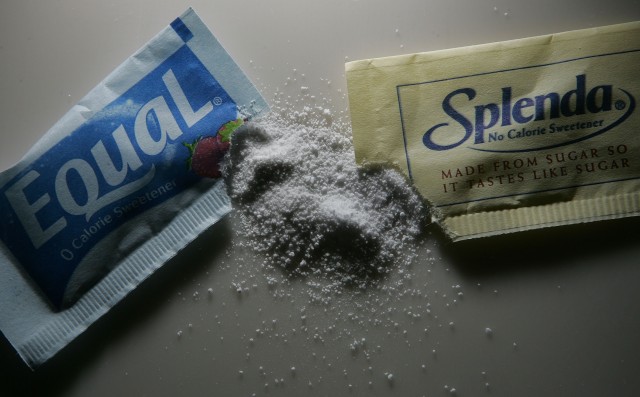 Sugar, unfortunately, is not as healthy as it is delicious. With that in mind, it’s still hard to kick the desire to indulge your sweet tooth. For that reason, many of us rely on artificial sweeteners to satisfy our cravings without sacrificing our diet.

Although artificial sweeteners like saccharin have been on the market since as early as 1879, the health effects of these products continue to be hotly contested. It’s easy to get overwhelmed by the conflicting reports out there, so we’ve compiled the below guide to all of the Food and Drug Administration-approved sweetener options on today’s market.

Marketed most familiarly as PureVia and Truvia, stevia sweetener is derived from the leaves of a South American plant. WebMD reports that stevia sweeteners are as much as 200 times sweeter than table sugar and are said to have a slightly bitter aftertaste.

Because of its organic origins, the sweetener business labels stevia as the “natural” no-calorie sweetening option. However, the products you see on grocery store shelves have indeed been processed. The Mayo Clinic notes that “although the FDA has approved highly refined stevia preparations as a novel sweetener, it has not approved whole-leaf stevia or crude stevia extracts for this use.”

According to Business Insider, raw stevia is not approved as a food additive by the FDA, but the government agency approved a naturally occurring compound within the stevia leaf called Rebaudioside A (Reb-A) in 2008. The products marketed as stevia in the United States are purified Reb-A extracts.

Aspartame is among the most common — and perhaps most widely debated — of artificial sweeteners, frequently being used in diet soda products as well as in some foods. Per U.S. News & World Report, it is approximately 200 times sweeter than sugar. The FDA itself calls aspartame “one of the most thoroughly tested and studied food additives the agency has ever approved.” According to the American Cancer Society, the substance is safe at acceptable daily intake levels, which stand at 50 milligrams per kilogram (mg/kg) of body weight. Says the American Cancer Society, “The ADI is set to be about 100 times less than the smallest amount that might cause health concerns, based on studies done in lab animals.”

Although rumors persist that aspartame is linked to the development of cancer, these have been deemed untrue or have been determined to rely on fundamentally flawed methods of experimentation.

Otherwise known by the commercial name Splenda, sucralose is reported by U.S. News & World Report to be 600 times as sweet as sugar by gram. In an official report on the substance, the FDA said: “In determining the safety of sucralose, the FDA reviewed data from more than 110 studies in humans and animals. Many of the studies were designed to identify possible toxic effects, including carcinogenic, reproductive, and neurological effects. No such effects were found, and FDA’s approval is based on the finding that sucralose is safe for human consumption.”

The Canadian Diabetes Association recommends an allowed daily intake of 9 milligrams per day per kilogram of body weight, noting that one packet of Splenda contains 12 milligrams of the substance.

Ranging from 7,000 to 13,000 times as sweet as table sugar, neotame (manufactured by Nutrasweet) is the sweetest FDA-approved sweetener available, says U.S. News and World Report. The FDA approved this addition to the list in 2002, making it the newest artificial with FDA approval currently on the market. Because of the reduced amount necessary to achieve the same level of sweetness, neotame is an attractive and cheaper alternative to its sweetener counterparts.

Acesulfame Potassium, or Ace-K, is marketed under the trade names Sunett and Sweet One. The substance is 200 times sweeter than table sugar and has been on the U.S. market since 1988. Although the substance was reportedly linked to cancer development in mice testing, a U.S. Department of Health and Human Services study concluded that there was “was no evidence of carcinogenic activity” in Ace-K. Further testing has been recommended by the Department of Health, as the substance has undergone less study than other approved artificial sweeteners.

Saccharin, a substance approximately 300 times sweeter than sugar, was discovered by Johns Hopkins scientist Constantine Fahlberg in 1879. According to Time, the substance was popularly used as a sweetener during sugar rations during World War I and II. Saccharin is approximately 300 times as sweet as table sugar, but the substance has faded in predominance due to health concerns as well as a noted metallic aftertaste.

For a time, saccharin was believed to be carcinogenic to humans due to studies that linked the substance to bladder cancer in rats in the early 1970s. Further study in the interim has demonstrated that this is due to what the Los Angeles Times calls “an effect considered irrelevant to humans because of the differences in urine composition between people and rats.” Consequently, saccharin was removed from the FDA’s caution list in 2000.