Is Craft Beer a Lie? A Peek Inside the World of ‘Big Beer’

If there’s one small segment of the food and beverage industry that’s exploding, it’s craft brewing. It seems that you can’t turn around these days without seeing some new beer from an abstract brewer you’ve never heard of, whether you’re in a 7-11, a grocery store, or a local liquor distributor. We’re used to seeing the staples like Budweiser, Coors, and Miller at the store, but every day there are more and more new beers flooding the market.

The rise of the craft beer industry hasn’t gone unnoticed. The entire beer industry is beginning to rely more and more on small, independent brewers as a source of innovation and as a way to enter new markets. According to research into the liquor industry done by the Demeter Group Investment Bank showed that craft beer is the only segment of the overall beer market that is actually growing. Overall, beer has lost ground to wine and spirits.

But even though small, independent beer makers are all the rage, craft brewers are still in a proverbial David vs. Goliath-type of situation. The existing big-beer hegemony has spent the past several decades consolidating, and we have now reached a point where the world of big beer is controlled by a small handful of powerful individual companies — much like in the tech or telecom industries, and even in other segments of the food and beverage industry.

In fact, many of the beers you may have thought were being produced independently or by craft brewers may already be under the umbrella of another giant corporation. The world of beer isn’t as simple as it used to be, and the industry hasn’t been spared from the same pressures and incentives that caused consolidation in other industries. 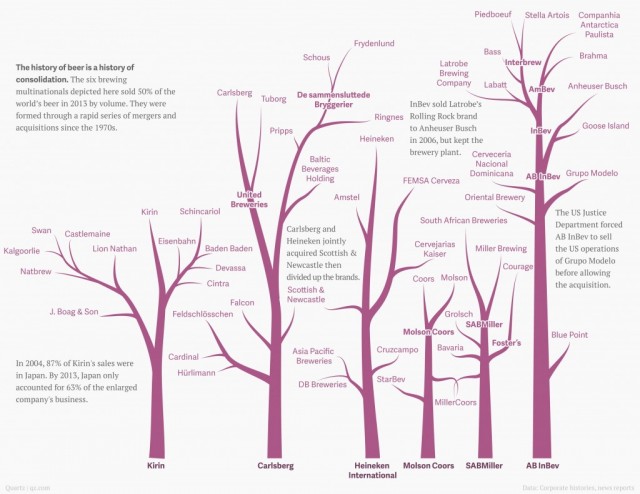 The chart above, put together by Quartz, really puts the world of Big Beer into perspective. What the industry currently consists of is a small group of concentrated, powerful conglomerates that control a vast amount of the industry. Quartz notes that the small group of six brewing powerhouses that can be seen above are actually in control of 50% of the entire world’s beer manufacturing. This occurred through a series of mergers and acquisitions throughout the ’70s, ’80s, and ’90s that left the brewing industry as we currently see it.

Quartz also says that over the past 10 years, the 10 largest brewers in the world have increased their market share from 48% in 2004 to 65% in 2013. That’s a jump of 18 percentage points in less than a decade, giving a glimpse at the muscle that these brewing conglomerates are capable of flexing.

This shouldn’t come as a huge surprise, however. As in many other industries, smaller brewers are continuously being gobbled up by larger competitors that absorb their sales. Moreover, as the beer industry has matured, the half-dozen or so major players — called the “power six” — have even begun talking about possible mergers between themselves. AB inBev and SABMiller have been in negotiation at times, and Pabst Brewing recently sold for $700 million to a Russian brewing conglomerate as well. Heineken is also in the market for a buyer.

What does it mean? Less Selection

What most people really care about, particularly when it comes to industry consolidation, is how it ultimately effects them as the end consumer. The results are rather predictable, as they are in any other industry that is dominated by a few monopolistic powers. Take a look at the country’s Internet providers, for example. They are constantly being call some of the most hated companies in America, and yet they don’t really need to bow down to calls for change from customers.

What’s happening in the beer industry is not the same as what’s happening in the telecom industry, but some of the same themes are there. If the consolidation trend continues to absorb more and more of the world’s brewing market, we could see the same product sold under different brand names in an attempt to give consumers the illusion of choice.