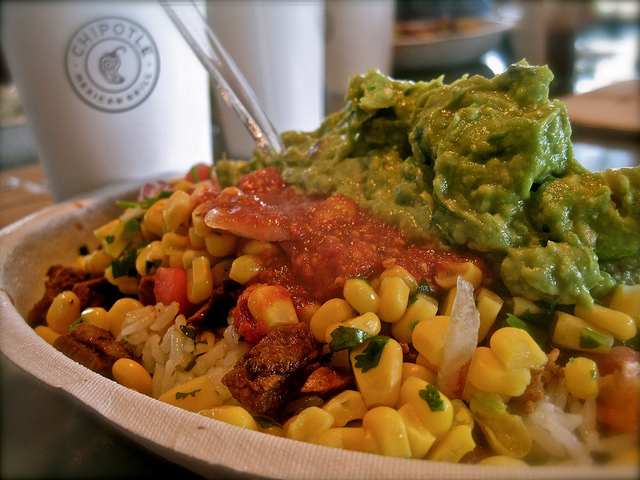 Based on its latest earnings, it is clear that Chipotle (NYSE:CMG) is now one of the most popular fast food establishments, but that’s not entirely good news for its consumers. Thanks to Chipotle’s ongoing success, there have been discussions about the chain possibly executing a price hike of 3 to 5 percent in the second half of the year. According to USA Today, the call for higher prices comes from higher costs for avocados and other ingredients, the company’s operating margin improving as a results of lower costs in other areas, and the confidence that its customers will still visit locations, even if it costs more to score a burrito.

Chipotle released its latest earnings Thursday and said that sales rose 9.3 percent at established locations in the last three months of the year. One of the chain’s main rivals, McDonald’s (NYSE:MCD), reported a decline of 1.4 percent for the same period, while Starbucks (NASDAQ:SBUX) reported a rise of 5 percent. The same-store sales figure is generally considered a good indicator of a company’s health, because the metric doesn’t take into account the volatility of newly opened or closed locations.

So, it looks like Chipotle is pretty well off, especially considering many fast-food restaurants are now struggling to stay above water at a time when consumers are more health conscious than ever, and less and less people are eating out. The lines at Chipotle are always long, and that’s one reality the company’s executives would like to sustain, but according to USA Today, they still expressed possible interest in a price hike when they took questions from analysts following the earnings release Thursday. When one analyst asked Chipotle why the company would risk hurting its brand by raising prices when it doesn’t need to, an executive replied that was among the considerations in deciding whether to go ahead with the hike.

Some have a hard time making sense of the fact that Chipotle has been doing so well at the same time that McDonald’s has been performing so poorly, but the key to Chipotle’s success can be found in two things: it’s relatively healthy ingredients, and its acknowledged commitment to putting customers first. Customers like that they can walk down the line, personally customizing the toppings on their burrito or salad, and they have also shown an appreciation for the chain’s commitment to eventually removing all GMOs from its ingredients, and standing by its slogan for high quality food, “Food With Integrity.” As more consumers become educated about the importance of healthy eating and sustainable ingredients, Chipotle has become the front fast-food runner in terms of its healthy offerings and various options.

Chipotle was one of the first well-known restaurants to take a stand against genetically modified organisms (or, GMOs) this summer, and it also attracted consumer attention when it rolled out the option to customize a salad, burrito bowl, or burrito with tofu. Arguably, not many people would think about ordering tofu at McDonald’s, but Chipotle? Now that’s a different story.

But the Denver, Colorado-based company could still face some pushback if it decides to go ahead with the price hike in the second half of the year, because its loyal customers are likely to notice. According to USA Today, Chipotle expects sales in established locations to rise in the low- to mid-single digits for the year, up from its previous forecast of growth, but those numbers don’t take into account the potential for price hikes on its menu.