Easy Breakfast Burrito Recipes That You Can Make at Home

For a hearty, filling breakfast, try making breakfast burritos. You can fill your tortillas with a variety of fresh vegetables and protein-packed meats or take it vegetarian by using eggs or black beans. Fresh and flavorful, the following eight breakfast burrito recipes are substantial enough to be turned into dinner entrées.

1. Breakfast Burritos with Chorizo and Eggs

When looking for chorizo to use in Bon Appétit’s recipe, if you cannot find Mexican, Fine Cooking does not suggest swapping Mexican for Spanish. Instead, you’ll want to replace it with a hot Italian sausage in order to maintain similar tastes and textures. This recipe yields 4 servings.

Warm tortillas in another skillet until pliable, 20 seconds per side. Divide chorizo among tortillas. Top with cheese, eggs, cilantro, salsa, and avocado. Fold short sides in and bottom flap up; roll up tortillas.

Chef Spike Mendelsohn lightened up the breakfast burrito, as seen in this recipe from Food & Wine. Scrambled eggs are made with both egg whites and eggs while turkey bacon has replaced regular, and the burritos have plenty of vegetables. It serves 4.

In a bowl, whisk the whole eggs and egg whites and season with salt. Heat the remaining 1½ teaspoons of oil in the skillet. Add the eggs and cook over moderate heat, stirring gently, until set, 3 minutes. Remove from the heat and stir in the bacon mixture, feta, and chives.

Spoon the egg mixture down the center of each tortilla and top with the lettuce. Fold in the sides of the tortillas, then fold the bottom of the tortillas over the filling and continue to roll until the filling is enclosed. Cut the burritos in half and serve. 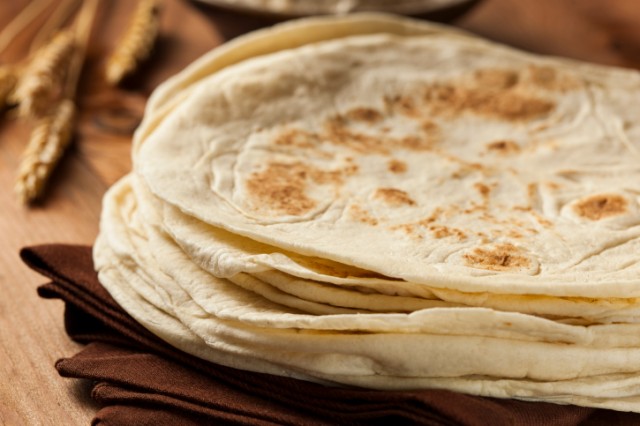 Like Mendelsohn, Ellie Krieger has gone for a whole egg and egg white mixture for a slightly lighter burrito in this Cooking Channel recipe. The vegetarian-friendly breakfast has 23 grams of protein and serves 4.

Ingredients: Heat the canola oil in a large nonstick skillet over medium-high heat. Cook the onions and peppers until onions are softened and peppers are slightly charred, about 8 minutes. Add black beans and red pepper flakes and cook until warmed through, another 3 minutes. Season with salt and pepper and transfer to a dish.

Whisk together the eggs and egg whites, then stir in the cheese. Spray the skillet with cooking spray and reheat the skillet over medium heat. Reduce heat to low and add eggs, scrambling until cooked through, about 3 minutes. Spread each tortilla with 1 tablespoon each sour cream and salsa, then layer with ¼ of the black bean mixture, ¼ of the scrambled eggs, some diced tomato, and ¼ of the avocado. Season, to taste, with hot sauce. Roll up burrito-style and serve. 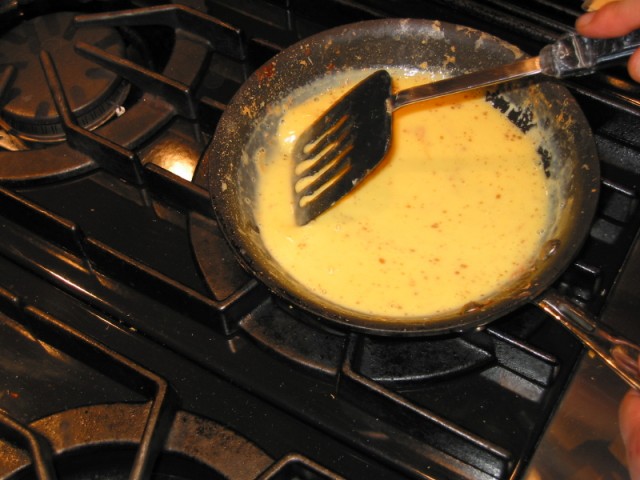 A slightly different take on black beans and breakfast burritos comes from Fine Cooking. You can purchase Mexican crema in the grocery store or try making your own following this recipe.

Ingredients: Heat oven to 350 degrees Fahrenheit. Wrap the flour tortillas together flat in foil and heat in the oven until warm, 10 minutes. While the tortillas are heating, heat 2 tablespoons of the oil in a large, heavy skillet over medium heat and cook the onion, stirring, until golden, about 10 minutes. Add the tomato, chipotles, beans, and ½ teaspoon salt and cook, stirring until heated through, for about 5 minutes.

In a medium nonstick skillet, heat the remaining 2 tablespoons oil over medium heat. Scramble the eggs and crema or milk with a fork and add them to the pan. Cook the eggs, stirring, until curds form; season with the remaining 1⁄4 teaspoon salt and remove from the heat when they’re still slightly moist.

Lay a warm tortilla flat and arrange the fillings in a row side by side: ¼ of the eggs, ¼ of the bean mixture, ¼ of the cheese, ¼ of the sliced avocado, and ¼ of the chopped cilantro. Fold up the bottom of the tortilla over some of the filling and fold in the sides to make an open package. Repeat with the remaining tortillas and serve the burritos immediately.

Taste of Home’s recipe fills a burrito with the popular breakfast-time combination of bacon and eggs. It can also be made ahead of time and frozen until you are ready to heat and eat the wrapped dish.

Directions: In a large skillet, cook bacon until crisp; remove to paper towels. Drain, reserving 1-2 tablespoons drippings. Add eggs, salt, and pepper to drippings; cook and stir over medium heat until the eggs are completely set.

Spoon about ¼ cup of egg mixture down the center of each tortilla; sprinkle with cheese, onions, and reserved bacon. Fold bottom and sides of each tortilla over filling. Wrap each in waxed paper and aluminum foil. Freeze for up to 1 month.

To use frozen burritos: Remove foil. Place waxed-paper-wrapped burritos on a microwave-safe plate. Microwave at 60 percent power for 1 to 1½ minutes or until heated through. Let stand for 20 seconds.

Turn leftover ham into breakfast by making these burritos from Allrecipes.com. Alternatively, you could use deli ham or another precooked meat, like rotisserie chicken. The recipe makes breakfast for 4.

Directions: Beat together eggs and milk. Heat a lightly oiled skillet (or nonstick pan) over medium-high heat and cook egg mixture, stirring occasionally, until firm. When almost done, stir in ham, green onions, salt, and pepper. Spoon ¼ of the egg mixture on top of each tortilla. Sprinkle the eggs with cheese, fold over the tortilla to make a roll, and top with salsa, if desired.

Eating Well’s breakfast burrito will start your day with an energy boost and keep you full as you go about your morning routine. The potatoes can be purchased prepared from the grocery store, or you can make your own shredded potatoes if desired. The recipe serves 6.

Directions: To prepare the sauce, heat oil in a medium saucepan over medium heat. Add minced onion and 2 cloves garlic and cook, stirring, until very soft, about 4 minutes. Sprinkle flour over the mixture and cook, stirring, for 1 minute more. Add chiles and broth; bring to a boil. Reduce heat to a low simmer and cook until thickened but still easily spoonable, 15 to 20 minutes. Set aside.

Meanwhile, begin preparing the burritos. Cook bacon in a large skillet, preferably cast iron, over medium-high heat until crisp, about 4 minutes. Transfer to a plate lined with paper towel. Crumble when cooled.

Add chopped onion and 1 clove garlic to the pan and cook, stirring, for 1 minute. Stir in potatoes. Pat the mixture down evenly and cook, without stirring, for 2 minutes. Scrape up the browned bits, pat back down again and continue cooking without stirring for about 2 minutes more. Repeat until the potatoes are golden brown with some crisp edges, about 2 minutes more. Reduce heat to low. Stir ¼ cup sauce and eggs into the potato mixture and cook, stirring frequently, until the eggs are just set, 1 to 2 minutes. Stir in the bacon and remove from the heat.

Divide the potato-egg mixture among tortillas. Roll each into a burrito and arrange seam-down on plates or a platter. Reheat the sauce, spoon over the burritos and sprinkle with cheese. Serve immediately. 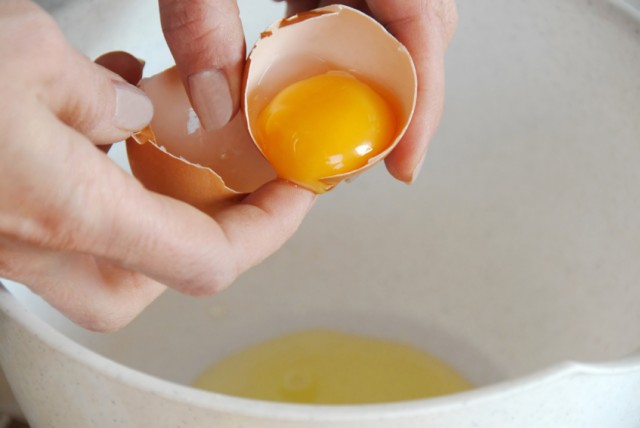 Egg whites receive an injection of flavor from roasted red peppers, cheddar cheese, and salsa in Cooking Light’s breakfast recipe. The burritos won’t be bland, especially if you opt for a spicy salsa. It serves 4.