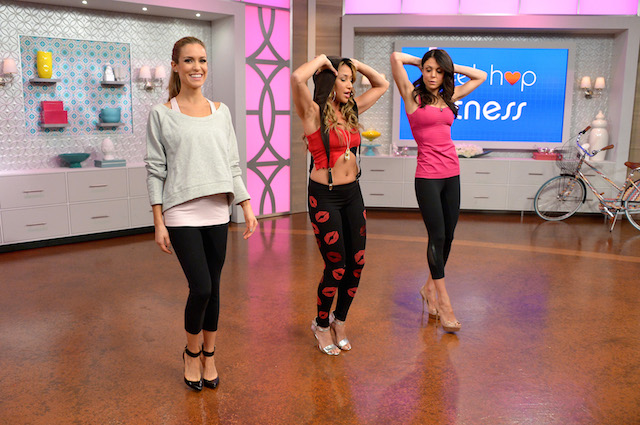 Kristin Cavallari is a fitness inspiration. After giving birth to her youngest son, Jaxon, in May, the 27-year-old mother of two has dropped 20 pounds and says she’s almost back to her her pre-pregnancy weight. So, how exactly does The Fabulist co-host manage to pull it all off? She’s making time for her fitness routine, despite her hectic lifestyle.

Between cramming in gym time and focusing on eating healthy, all-natural foods, Cavallari makes losing weight look as easy as pie (which she’ll eat as long as it’s all natural). Her motto is one everyone should follow: your health should always be a top priority. Ready to embrace Cavallari’s healthy lifestyle? A little exercise and some healthy food can really go a long way.

Cavallari made it a priority to begin working out when her son was three weeks old. “I’ve been working out four to five times a week for 30 to 45 minutes at home, doing tons of leg work like squats, lunges and lifting weights. I want to start Pilates again to focus on my core. I’ll probably get back into it in the next couple weeks,” she tells E.

Her main focus? Her legs and butt. Cavallari admits to needing to work on her stomach, “but that takes time more than anything and diet plays a huge role,” according to the E article.

She’s also a big believer in a circuit training class, Burn 60, which she says is a great way to work up a sweat. “Once you see results, you want to maintain them and you want to keep it going and that makes you want to go to the gym,”Skinny vs Curvy reports Cavallari saying.

And if you’re running short on time, a quick workout is always better than no workout. Cavallari has a fast and effective routine for hectic days, consisting of 20 minutes of cardio followed by weights. “Weights, for me, is what makes a big difference in my body,” she tells Celebuzz.

Cavallari says her diet always remains the same, whether she’s pregnant or not. “I don’t eat any toxic chemicals and I try to eat organic as often as possible. We eat a ton of veggies, chicken, grass-fed beef, bison and fish. We also love sweet potatoes and brown rice pasta. I either make a smoothie, oatmeal or eggs for breakfast and a salad or turkey sandwich for lunch. I have a snack in the afternoon—usually nuts with dried cherries, chips with hummus, or an apple and almond butter,” she tells E. In addition, Cavallari says she’s a fan of avocados with olive oil and sea salt, and is guilty of putting coconut oil on everything.

Ready to say goodbye to toxic chemicals, too? Your body will thank you. Toxic chemicals are highly processed ingredients found in foods that aren’t good for you, which can cause serious harm to your health. These include refined grans, trans fats, and high fructose corn syrup, along with food that has been canned or dehydrated. Unfortunately, the Huffington Post writes that these foods make up about 60 percent of the average U.S. diet.

Here’s a list of ten foods you should try to cut out entirely, per the Huffington Post. When you’re at the store, take a minute to scan food labels and make sure they’re chemical free. Unfortunately, most of a grocery store’s middle aisles are filled with bad-for-you food. Stay around the perimeter, loading up on lean protein and produce instead.

Luckily, there’s still room in your diet for sweets and treats. It’s all about the ingredients you use. BeautyStyleLiving writes that Cavallari enjoys making ice cream sandwiches that are vegan and gluten free. Rather than using butter and eggs, Cavallari uses applesauce, and she substitutes the white flour for a gluten-free, vegan version. She swaps out traditional chocolate chips for vegan bits, and uses Coconut Bliss ice cream, which is made with coconut milk instead of dairy.

Interested in creating your own gluten-free chocolate-chip cookie sandwiches? Here’s exactly how Cavallari did it, per BeautyStyleLiving.

Directions: Preheat the oven to 325 degrees Fahrenheit. Line two baking sheets with parchment paper. In a medium bowl, mix together the oil, applesauce, salt, vanilla, and sugar. In another medium bowl, whisk together the flour, flax meal, baking soda, and xanthan gum. Add the dry ingredients to the wet and stir until a grainy dough is formed. Gently fold in the chocolate chips until evenly distributed throughout the dough.

Scoop the dough onto the prepared baking sheets, spacing the portions 1 inch apart. Bake the cookies on the center rack for 15 minutes, rotating the sheets 180 degrees after 9 minutes. The finished cookies will be crisp on the edges and soft in the center. Let the cookies cool completely on a wire rack before putting a scoop of ice cream in between two cookies. Wrap sandwiches individually in plastic wrap before putting in the freezer.