Can’t Go to Mardi Gras? Bring New Orleans to You With These 7 Recipes

Mardi Gras here, and although most of us aren’t lucky enough touch down in New Orleans and indulge in some of the holiday’s most popular customs, that doesn’t mean we can’t celebrate Fat Tuesday from the comfort of our own homes. Whether you’re celebrating a low-key night with family or are ready to go all out and throw a dinner party, check out these recipes that prove many Mardi Gras dishes aren’t only for the experts to perfect — you can make them, too.

Thanks to an array of dinner, drink, and dessert ideas, Mardi Gras fare appeals to just about anyone. Whip up these recipes and you’ll be sure to earn some beads this year.

We’ll start with the desserts, as these are what many Americans first think of when visions of Mardis Gras and New Orleans dance through their heads. One word: beignets. It’s the deep-fried pastry that New Orleans is known for, and even if you aren’t into the Mardi Gras party scene, these decadent treats are reason enough to make a trip to the city. Deep fried and served piping hot, it’s hard to imagine that something as perfect as beignets can come out of just about anyone’s kitchen — but they can. Libby from Baking With Libby shares her foolproof recipe for traditional beignets, and promises the dish is “very, very, very easy to make.” Don’t believe her? Try it and serve these alongside your other traditional Mardi Gras recipes.

Directions: Heat oil in frying pan on medium-low heat. Sift dry ingredients together in a bowl. Add egg and milk. Stir and mix until batter becomes thick. If it is thin, add more flour until it starts to thicken.

Drop by spoonfuls into the oil, only frying two at a time. Spread the dough out a little in each one so they will cook all the way through. Fry on each side until golden brown. Sprinkle powdered sugar onto each beignet after frying.

Up next is another Mardi Gras and New Orleans traditional dessert: king cake. Don’t know the story behind it? You’re not alone. According to New Orleans Showcase, the season of Mardi Gras actually begins on January 6 and concludes on Fat Tuesday, the day before Lent. Christians celebrate the 12th day after Christmas as the date that the Magi visited the baby Jesus. This day, January 6, is known by several names, including “Epiphany,” “Twelfth Night,” or “Kings Day.” The New Orleans tradition, believed to have started in the 1870s, is to bake a cake in honor of the three kings, hence the name king cake. King cakes are oval-shaped to symbolize the unity of faiths, and each cake is decorated in the traditional Mardi Gras colors, with a small baby, symbolizing the baby Jesus, traditionally hidden inside each offering.

So, now that you understand the history of the king cake, are you ready to get baking? If your answer is yes, buckle your seat belt, because it’s about to be a wild ride. Plain and simple, king cakes are tedious to make. They demand many different steps, require that you use yeast (ah!), and also involve a great deal of baking time. However, there is a shortcut, like this easy King Cake from Relish.

To prepare cake, separate crescent rolls at perforations, into 16 slices. Place slices around pan with points in the center. About halfway down from points, press seams together. Combine cream cheese, powdered sugar and vanilla in a mixing bowl. Using a mixer at medium speed, beat until creamy. Spread cream cheese mixture on dough in the center where seams have been pressed together.

Combine butter, brown sugar and cinnamon in a small bowl. Stir with a fork until crumbly. Sprinkle over cream cheese. Fold dough points over filling, then fold base of triangles over points forming a circular roll. Bake 20 to 25 minutes, until golden brown.

Next, we’re onto the traditional New Orleans mains, considering your family members and guests can’t exactly only eat beignets and king cake on Fat Tuesday, regardless of what the day’s name suggests. We’re starting with gumbo because it is arguably one of the first dishes tourist go after when they visit the great city of New Orleans, and the good news for you is that you don’t have to be a tried-and-true Southern chef to bring this recipe to life. Everyone has a little Creole in them, and this dish from Southern Living will prove to your guests that you do, too.

Jambalaya is what’s cookin’ for our No. 4 spot, because everyone knows that if you’re going to go big on Fat Tuesday, you might as well stir up some jambalaya. The great thing about this New Orleans favorite is that it’s a one-pot dish — no messy clean-up required. Throw your ingredients in a Dutch oven; stir, stir, stir; and eventually you’ll come up with a meal that seems a lot more demanding than it really is. Though this recipe from Martha Stewart only serves four, if you are planning on having some friends over for the big holiday, feel free to double the ingredients and make enough for all. Trust us, you’ll want seconds.

Directions: Heat oil in a Dutch oven over medium-high heat. Season chicken with salt and pepper. Cook until golden brown, about 5 minutes per side. Cut into ¾-inch pieces; set aside.

And just in case you’re not in the mood for the chicken and sausage gumbo or the easy jambalaya, how about trying your hand at shrimp po’boys on Tuesday? We know it sounds like a pipe dream, but thanks to an easy recipe from Rachael Ray, you can easily make that dream a reality. The delectable lunch or dinner dish that is commonly found in New Orleans restaurants doesn’t have to stay on that side of the coast. Pick up some shrimp at your grocery store and bring New Orleans to you. Because if not now, when?

Directions: Preheat 1 inch of oil in a deep skillet over medium to medium-high heat.

Beat egg and milk together. Pull tails off shrimp. Salt shrimp, then soak in milk batter. Before you begin breading the shrimp, cover a plate with plastic wrap for easy clean-up, then mix together the flour, cornmeal or bread crumbs, and seafood seasoning on the plate. Using tongs, remove a few shrimp at a time and coat in breading. Add breaded shrimp to the hot oil and fry them 5 to 6 minutes or until firm and deeply golden all over.

Pile lettuce and tomato on rolls and top with shrimp, dousing the shrimp with a little lemon juice. Mix relish, mustard, and hot sauce and dot the roll tops with spoonfuls of the sauce before setting into place. 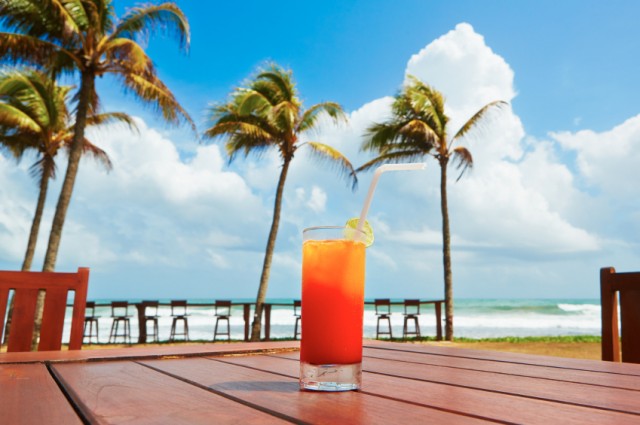 Next up is drinks, because it is Mardi Gras, after all. Some people in New Orleans will be indulging in their fair share of beignets this celebratory season while others will be too busy enjoying the drinks. You can do both — all in moderation, of course. Possibly the most iconic Mardi Gras drink is the infamous Hurricane, and luckily for you, the drink’s name is much more intimidating than its recipe. Though this drink is best served in a Hurricane Glass, feel free to dish it out any way you like. Just keep an eye on your guests, as it claims this name for a reason. Here’s a recipe for a New Orleans-style homemade Hurricane from Drinks Mixer.

Last but not least, one more drink recipe for your Mardi Gras recipe arsenal. Two words: Vieux Carré.  It’s another one that people will be imbibing a lot of come Tuesday, and you can, too, as long as you have a number of fun ingredients on hand. Named after New Orleans’s French Quarter, this drink is said to be representative of the city as the neighborhood, and as to be expected, it’s quite strong. Here’s a recipe for Vieux Carré from Chow.

Directions: Combine the whiskey, Cognac, vermouth, Bénédictine D.O.M., and both bitters in a cocktail mixer, then fill with ice. Stir until chilled through, then strain into a chilled cocktail glass. Garnish with a lemon twist and serve.