Dieting Makes You Healthier, But It Also Causes Depression 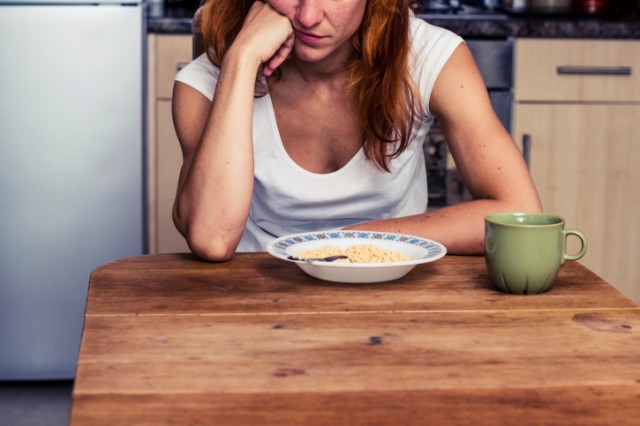 Controlling your diet and what you eat is one way to stay fit — and you would think that having a healthier body would leave you happy, or at the very least content with yourself. But a new study from researchers at the University College London have found that dieting leaves you more depressed.

“Resisting the ever-present temptations of unhealthy food in modern society takes a mental toll, as it requires considerable willpower and may involve missing out on some enjoyable activities,” said researcher and lead author Sarah Jackson in a university press statement. “Anyone who has ever been on a diet would understand how this could affect wellbeing. However, mood may improve once target weight is reached and the focus is on weight maintenance. Our data only covered a four-year period, so it would be interesting to see how mood changes once people settle into their lower weight.”

In the study, which was published in the journal PLOS ONE, people who lost weight were twice as likely to feel tired, lonely, and sad. The researchers note that one of the reasons is that the advertising world sends the message that people will be transformed when they lose weight and in most, if not all cases, that does not happen. The disappointment they feel after realizing that their life has not changed is what leads to the symptoms of depression.

“We do not want to discourage anyone from trying to lose weight, which has tremendous physical benefits, but people should not expect weight loss to instantly improve all aspects of life,” Jackson said. “Aspirational advertising by diet brands may give people unrealistic expectations about weight loss. They often promise instant life improvements, which may not be borne out in reality for many people. People should be realistic about weight loss and be prepared for the challenges.”

The researchers looked at data of almost 2,000 overweight and obese men and women over the course of four years. In the subjects who were successful in losing at least 5 percent of their body weight, a worse mood was also reported. In fact, the researchers found that subjects who had lost weight were 78 percent more likely to have symptoms of depression than those who did not.

“We can speculate that the experience of restricting food intake and resisting temptations is bound to be hard, despite the undoubted satisfaction of seeing the inches go down and getting fitter,” added Jackson, reports Mail Online. “Dieting requires considerable willpower and it might involve missing out on special meals and eating in restaurants. It is not necessarily the most pleasant experience for people. Lots of people want to lose weight thinking it will fix all their problems. But while it will go some way towards fixing their health, it won’t necessarily make them happier in the short-term.”
The connection between food and mood is not a novel one — a 2013 study published in the Journal of Psychopharmacology found that chocolate can make you happier by stimulating a part of your brain that is associated with mood. “Cocoa boosts brain serotonin,” says ethnobotanist Chris “The Medicine Hunter” Kilham, to CNN. “Almost every single antidepressant aims at either enhancing serotonin or keeping it in the brain longer. Chocolate or cocoa does that very well.”