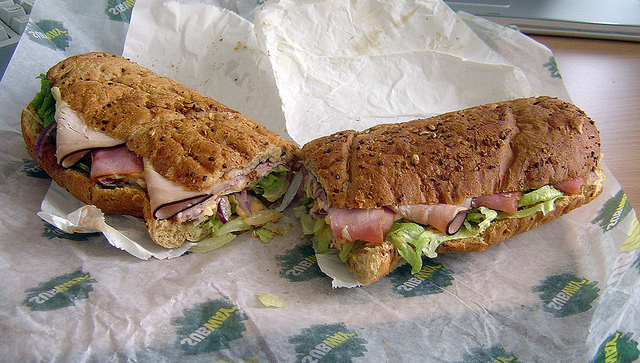 Subway has been hailed as a fast food company that is a gold mine even for health-conscious consumers. Just last week, Michelle Obama ate lunch at the restaurant before hosting a press conference at a Subway in Washington, D.C., recognizing the chain for joining her healthy eating initiative and agreeing to add nutritious foods to its kids menu. But recent news surrounding Subway still isn’t all good, although soon, the company pledges that it will be.

According to CNN, Subway responded to its consumers’ concerns this week when it promised that it would remove a chemical from its breads that is used by commercial bakers for the purpose of strengthening dough. Azodiacarbonamide is not only a dough conditioner, it is also a chemical used to increase elasticity in everything from yoga mats to shoe rubber to synthetic leather, and though it is a USDA and FDA approved ingredient, Subway lovers want it removed. Azodiacarbonamide is banned in the UK, Europe, and Australia.

CNN reports that the Center for Science in the Public interest has long advocated for reducing the amount of chemical that is allowed to be used in the U.S., as the agency argues that the controversial chemical has been poorly tested; however, it was food blogger Van Hari, of the popular food blog, Food Babe, who successfully drew significant attention to the issue when she first starting talking about Subway’s potentially harmful ingredients in 2012.

This week, Hari launched a petition urging Subway to stop using azodiacarbonamide, amassing more than 67,000 signatures, and Subway responded to the petition with the statement, “We are already in the process of removing azodiacarbonamide as part of our bread improvement efforts despite the fact that it is a USDA and FDA approved ingredient. The complete conversion to have this product out of the bread will be done soon.”

According to CNN, although azodiacarbonamide is a FDA approved ingredient, the agency requires that the chemical not exceed 0.0045 percent by weight of the flour when used in as a “dough conditioner.” CSPI is happy that such a standard is present, however, it reports that one of the breakdown products of azodiacarbonamide is called urethane, a recognized carcinogen, so using azodiacarbonamide at maximum allowable levels still results in higher levels of urethane in bread “that pose a small risk to humans.”

In addition, another breakdown product, semicarbasize, was found to cause cancers of the lung and blood vessels in mice, although CSPI said it poses “a negligible risk to humans.”

In Subway’s case, however, the amount of azodicarbonamide use as a dough conditioner is irrelevant, because the chain says the product will be out of its bread completely soon. Subway certainly isn’t the only restaurant to use this chemical, as CNN reports that grocery store breads and restaurants breads also contain this chemical, but insider sources say it is still especially necessary for Subway to make a public statement about azodiacarbonamide because freshly baked bread is one of the chain’s main selling points. Now that consumers are more health conscious than ever, Subway simply has no wiggle room when it comes to marketing its outed chemical-laden bread.

Unsurprisingly, the food blogger behind Subway’s big change, Hari, is happy with’s chain new promise, and she said in an e-mail, via USA Today, “I commend Subway for finally responding to me and now over 58,000 concerned citizens. Their swift action is a testament to what power petitions and individuals can have. I’d like to note that current Subway sandwiches still have this ingredient, and I urge everyone not to eat their sandwich bread until they have finally removed the chemical.”