Caroline Wozniacki showed up at the Masters sporting something louder than John Daly’s pants: violent pink hair. This of course got us thinking about Daly’s pants and other fairway styles that have been interesting to say the least. Some golfers can get away with what are usually fashion faux pas because, after years on the tour, we expect (and want) nothing less. Others have just misstepped so egregiously it is hard to take the style decisions as part and parcel of their life.

See which of the following five players has escaped the rough by virtue of charisma and who scored a fashion bogey.

Wozniacki was at Augusta to caddie for fiancé Rory McIlroy as he took part in the Par-3 Contest. McIlroy explained to The Augusta Chronicle why the shocking dye job occurred. “I just wanted it to match the azaleas,” McIlroy stated. He even assisted during the process, helping to dye her hair.

With painfully pink hair, Wozniacki upstaged Miguel Angel Jimenez’s hair. There is a bit of a love/hate relationship with Jimenez’s curly locks, which were out in full force on the first day of play. Known for his cigars and stretching routine, there is no denying that the Mechanic has a style all his own. That said, even his hair is at its best when it is tamed, and pulled back. It looked particularly frizzled and showed signs of thinning during day one at Augusta.

Ian Poulter has worn his fair share of plaid pants, and normally without offense — or at least much offense. But this combination is just too much. The pattern and red color are reminiscent of the winter holidays and would not be misplaced as a Christmas tree skirt. Add to that the fact that Poulter is surrounded by greenery and wearing a green shirt, and you have a golf-Christmas outfit gone horribly wrong. The red accents in his shoes and club aren’t helping either. The pants even proved distracting enough that during the first viewing, Justin Rose’s nearly all grey and not-so-great ensemble escaped attention.

Poulter of course, has done far worse than this look. In 2008, the Englishman showed up at the Johnnie Walker Classic in brown pants and a metallic gold shirt–which shone in brilliant horrid glory due to the Australian sunshine. 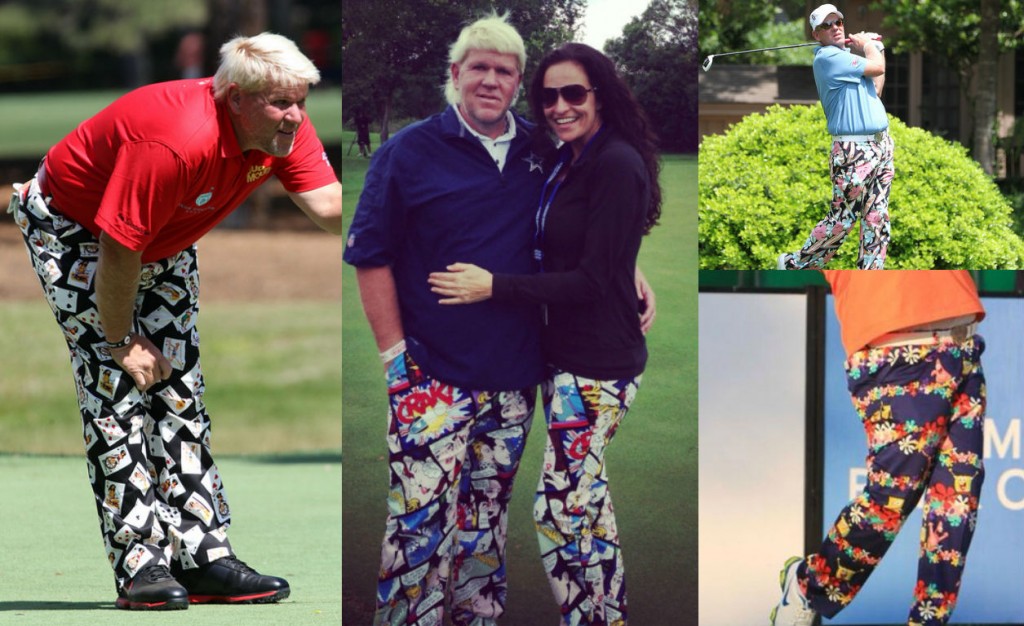 This cannot come as a surprise to anyone, but John Daly has worn his share of hideous pants. Like Jimenez’s hair, there is something enigmatic about Daly’s pants. Loud, horrible, and a style you’d most likely never wear yourself, they fit Daly’s personality. Also, again like Jimenez’s hair, even Daly could do with some self-editing in his style selections. The pants decorated with a deck of cards are particularly atrocious, and two pairs of the same pants in one picture is really just too much to handle.

Love them or hate them, you can’t stop looking at them. If someone hasn’t done so already, the pants could easily support their own blog, a la Craig Sager’s Suits. 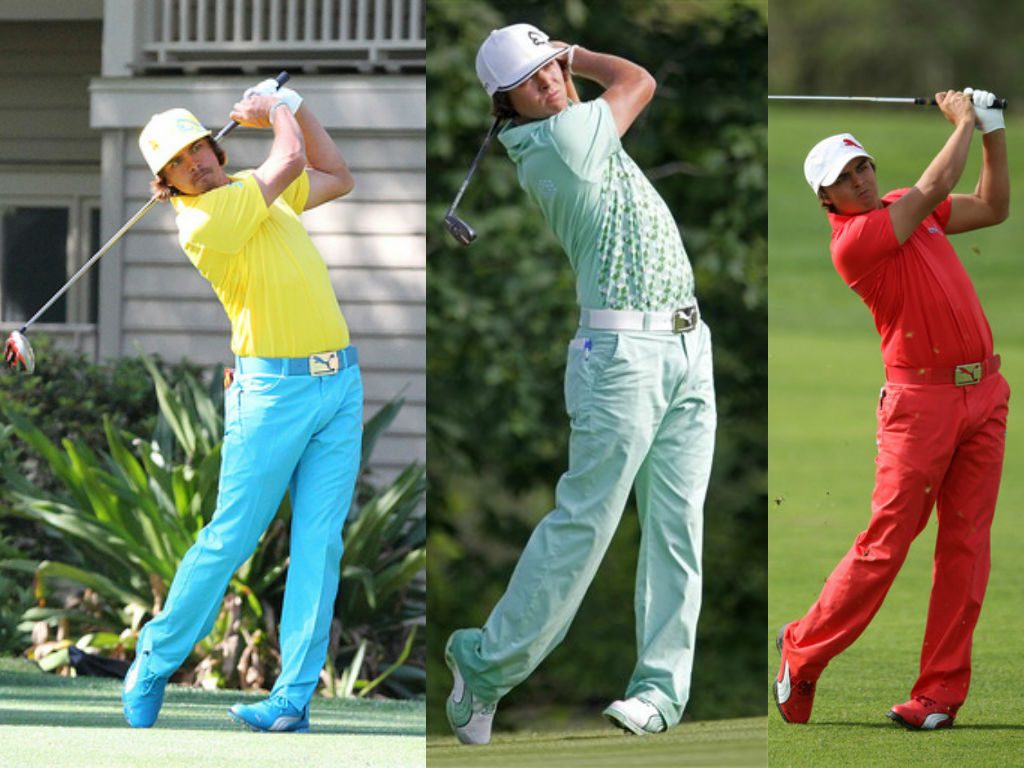 And if whoever starts John Daly’s Pants ever runs out of choices, they can easily turn to Rickie Fowler for material. Unlike Daly and Jimenez, it is harder to give Fowler a pass, mainly because he often opts for one color scheme head to toe. Daly at least coordinates his tops with his loud pants. Fowler just goes all in, with one vibrant hue from head to toe. In the middle, the outfit is mildly broken up by another piece of questionable styling: a large belt buckle, an object only outdone in size by his wide-brimmed hat.

There is a right way, and a wrong way to show patriotism. Webb Simpson’s American flag critter pants? The right way. Woody Austin’s American flag shirt? The wrong way. Again, there is nothing wrong with showing your pride for your country, but oversized prints of the American flag on your polo shirt should not be your first — or second — style choice. Austin does deserve some credit, as the shirt above is an improvement over the version he wore at the 2008 Buick Open. Austin also often dons polo shirts embellished with tropical scenes; these too should be abandoned.